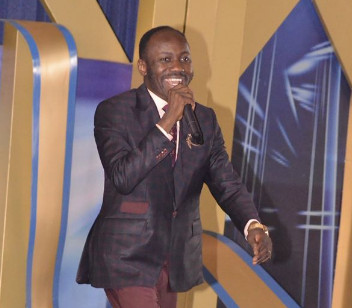 Recall that a couple of days ago, one Stephanie Otobo, who was arrested for allegedly blackmailing the cleric revealed in a press conference that she and Suleman had a sexual relationship, adding that he got her pregnant at one time and gave her something to drink that terminated the pregnacy, making her bleed for almost a year.

She accused him of breaching his promise to marry her. She also released screenshots of video calls they both had.

Another lady who identified herself as Queen Esther, and claimed to be a former usher at OFM, also revealed to Premium Times that she was in a sexual relationship with Suleman between 2013 and 2014.

The pastor, through the church had denied these allegations, saying it is a spiritual battle.

Suleman, had on Sunday disclosed that the truth will come out withib 48 hours.

It is clear that Mallam Nasir El-Rufai is the mastermind of these allegations. The masquerade has been unveiled and is now dancing naked in the market Square. We don’t need to look any further for the source of the smoke.

When Festus Keyamo (Stephanie’s lawyer) in his first letter to our pastor made allusion to fulani herdsmen, we dismissed it as a coincidence. Then intelligence revealed that some persons are lodged in a hotel being trained on how to clone Apostle’s voice and crop videos.

The first question that crossed our mind was who was paying the bills, especially the huge media blitz that has trailed the spurious allegations. We did not have to wait for long before El-Rufai exposed himself. Indeed, he could not wait for long before coming out of the closet

Why is the said Queen Esther asking for protection from the Kaduna State government. Is the government now the police or the Department of State Services (DSS)? Why did she not mention any other state? Is it not obvious that she is telling us what her sponsors are willing for Nigerians to know?

The statement said that it cannot be a coincidence that this is happening after Suleman condemned the killings by Fulani herdsmen in Southern Kaduna, and across the country.