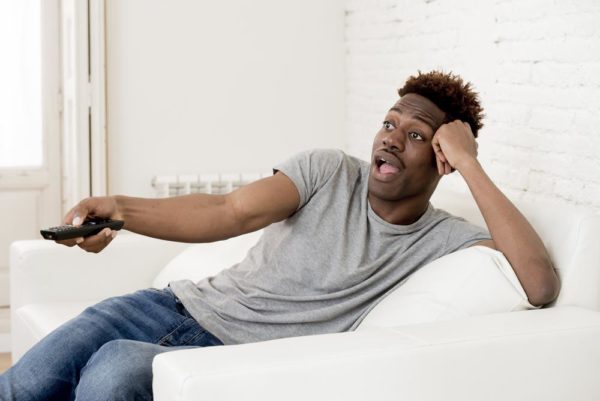 Last week, I had to block a pal on mine on iMessage last week. His crime was grievous: Dude dared to reveal what happened to the Joker in the most recent season of Gotham, the TV show. I am a huge fan of the series and anything connected to Batman. Friends like that should come with “Spoiler Alert” tattooed on their foreheads. Thank goodness for the wonders of modern technology.

When it is not spying on you, it is a useful tool for social disassociation.  From now on dude, anything you want to ask me, fax me.

When it comes to entertainment, the arts, popular culture and style, I am a student of history. For movies, I love the 80s (the exception being Grease which was released in 1978 and is the greatest movie of all time).

When it comes to style, I fancy the suave, clean-lined garments from the 60s.  For music, as a hiphop, R”n”B and grunge music head, I hype the 90s as the golden era. Finally for television series (just like technology), I like the right now.

Don’t get me wrong. TV shows from way back when like Miami Vice, A-Team and The Cosby Show are classic material, but a few of them were cheap with their special effects and studio props, when compared to the movies of their time. For me, it is easy to tell if the living room decor in the background is a mock-up. I like make-believe, but not when it is obviously fake and all in my face – except maybe for silicon titties. Please don’t kill my high.

There is something fantastic about watching a television character develop over the course of a season, in a slow but well-cooked manner that a summarized movie cannot project adequately. It is like drinking your pap with condensed milk. Peak Milk in a condensed tin rises to the top of the ogi, and by the time you are finished with the milky layer, you have had your fill, and get disinterested with the rest of the concoction.  Contrast with when you garnish said akamu with Dano Powdered milk. Very often a creamy cake of powdered milk will congregate at the bottom of the pap, giving you a delightful and utterly satisfying last couple of morsels.

Movies generally seem to follow a tried and trusted, but tired and busted theme – depending on their origins.

In Hollywood, good looking actor defeats all odds and the bad guys, with ripping muscles and big guns blazing. He scoops up the pretty girl in the daisy duke shorts at the bar. In the end, everybody smiles, as the “actor” and his chick drive into the sunset, with beer cans tied to their back bumper. The credits roll. Actor no dey die.

For Bollywood, the nerdy guy chats up the girl by dancing circles around her, and singing her into submission. Somehow they never kiss;  a cock-blocker – someone or something usually interrupts.

For Chinese martial arts movies, the sequence of events is simple. ‘A’ opens a kung fu school. ‘B’ comes along and beats ‘A’ to stupor.  After ‘A’ dies, his ward ‘C’ seeks revenge and kills ‘B’. Note how there are no girls involved at the beginning. Later C marries A’s daughter Chun Li. They share a rice noodle. Credits roll.

For old-school Nollywood, the typical script is more complicated. ‘A’ is born in abject poverty in the village. He does either jazz or ‘419’ to make money and moves to Lagos where he lives it up extravagantly chasing promiscuous university ‘runs’ girls. Later on in the film, Jim Iyke slaps a girl. The end.

Other than romantic comedies, which have a better end-product if they are half short, and twice strong, television is a better story portraying medium, as it is more layered. I, for one, loved seeing how Frank Underwood, Kevin Spacey’s Machiavellian character in House of Cards, developed from an ambitious randy senator with low moral fiber, to a power hungry tyrant who was ready to throw anyone under the train to remain presido. Some politicians just want to see the world burn. Until whistleblowers blow peem! Peem!

All for what? Perhaps, television is fast becoming a reflection of society past and present. Like a famous lyricist once said: “We are in a state of emergency; the death side – a mirrored image of where we are today; the life side – a vision of where we need to go”.

The economic inequalities, hardships and the corruption scandals, which are now the norm in Nigeria, are a microcosm of the world at large. The TV show the Walking Dead (TWD) best symbolizes it all.

The zombies represent a dead-beat populace going through the motions of work, struggle, family, deaths and sadness. They believe everything they read in the newsprint or hear on TV. Other times it’s  about the morally inept, who live in a social media bubble of taking selfies, living to party on the weekend and front on the ‘gram.

The survivors in that show depict the knowledgeable and “woke” 10% who realize that there is more to living than a lifeless ordinariness. The guns, arrows and swords of the TWD represent the shields of knowledge, creed, defiance and a deep rootedness in values of humility, charity and chivalry. This keeps the truth-seekers afloat in this new selfish and terrible world. The more things change, the more they remain the same.

However, serialized TV has its worries. There is the threat of spoilers like my friend above, who discuss episodes you have not yet watched, revealing the intricate plots of endings and ruining your experience –  just because they have cable. You, on the other hand, have to rely on your trusty pirated DVD sales-man or dodgy illegal streams in order to keep up with the series you crave.

There is also the danger of drawn out storylines and repetitive themes which run their course over the life of the series. They start to bore you after a couple of episodes or seasons  I got a bit tired of Luke Cage after the first few episodes.

There is also the overt sensualization and over-sexualization of characters by TV producers to create shock value and to boost ratings. That is the rabbit hole Empire has gone into, to join Scandal and the likes.

Finally there is also the danger that charismatic and well-loved characters either pass in real life (the death of Andy Whitfield the first lead character in Spartacus: Blood and Sand), or in the series itself (like the death by accident of Matthew Crawley in Downton Abbey). Sometimes, they are phased out for some weird production reason (Pornstache in Orange Is the New Black).

Anyway, these are my recommendations right now:

My missus swears by “This is Us”, but I have seen just about 3 episodes, so I cannot speak on it yet.

Series that I just could not get into despite the “good” reviews include: Luke Cage, The Queen, Versailles, Jessica Jones, The Badlands. Oh, and I still think Game of Thrones is like Mist Alba – meh!

Last night I watched TV but it watched me/

Know what that means, a brother fell asleep/