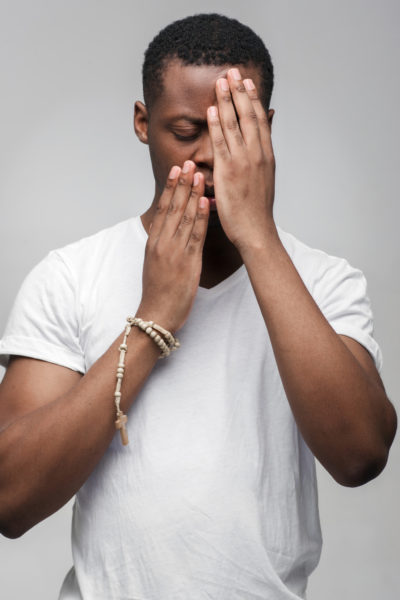 Our patriarchal society nudges men into hyper-masculinity. “Men are not meant to cry.” “Men should always be strong.” Most times, men experience ridicule when they show “weakness”; ergo, they are reluctant to air those issues that negatively bother them. They do not want to openly talk about how they are maltreated in romantic relationships, how they are harassed by female bosses, how they are feeling sad from the pain of a love-affair turned sour, to mention a few.

What is worse is that some men do not believe men can be rape survivors. You tell them a teacher raped her fourteen-year-old student, and the next thing you hear is, “I wish I were that guy! See enjoyment!” On a normal day, men void their pain.

Why do they remember “men also suffer” any time, every time, women start venting about how we face abuse and violence?

#RIPKarabo recently set Twitterverse ablaze. A man had murdered his twenty-two-year-old girlfriend. The killer had “necklaced her and poured acid all over her body”. Very harrowing! This coincided with Mercy Aigbe speaking up on how she suffered domestic violence at the hands of her husband. Somehow, these two events set into motion a Twitter timeline replete with threads of how women suffer several shades of abuse from men.

This brings to mind the Twitter hashtag that trended late 2016, #MenAreScum. Most of us used this hashtag to narrate how we have been harassed in different ways by men we know and the ones we do not know. Before that hashtag, most of us had been silent about these issues. Alas! Covering yourself with layers of silence will not save you. We vented. We let it all out.

In the midst of these tweets, some people tried to justify (or should I say “pardon”?) men for being mean to women. Some tweeted, “What did you do to provoke him?” “When you know how someone is, you should not annoy the person.” Among these were the ones that embodied, “men also suffer.”

2015. Evening. Interior of a bus
(Random man sitting by my side takes a large bite off the paw-paw he is holding. He hungrily chews on it. He turns to look at my friend drinking from a bottle of soft drink.)

Man: (Points at her drink) This one is better. It does not have sugar. The bitterness is good.

Me: I really do not know about how much sugar is in here, but eating fruit is better. I should have gotten a fruit just that I can’t wash it until I get home.

Man: Home. (Countenance changes) I don’t like going home. My wife is terrible.

And that was how this man opened up to tell my friend and I about how his home had become hell. Truly, four walls do not make a home. He was bitter. There I was wondering why anyone would want to treat another human being in such a cruel manner.

I will not pretend men do not suffer abuse. A friend, who used to be my lecturer, told me he was “assaulted” by an older woman. He did not even want to say “rape”. Another recently told me his first sexual experience was via rape. There are men, who have wives that cheat on them emotionally, too. I could go on and on about how men suffer.

Talking about how “men also suffer” when women come out to talk about their experience is tantamount to saying, “Will you keep quiet? Men also feel the same pains you feel.”

Women come out, air their issues, build conversations around these issues, and suddenly, some men that nullify abuse against men come forth to say, “men also suffer”. They say (or type) this banality with such aplomb and one is tempted to slap the words back into their mouths.

To be honest, I am beyond shocked when I see this. I begin to wonder when and how they got the epiphany of men being victims of abuse. Many questions swirl in my mind: Why this moment? Why did they not cry about their pain before this moment women decided to speak up? Why are they desperately trying so hard to shift the focus of the conversation? Wasn’t the aim of the conversation for women to express themselves? Why the sudden awareness of men being victims of abuse? Why are they just seeing this “light”?

Patriarchy-enforced male ego won’t let most men talk about how they suffer; however, when women get expressive about their experiences, they tag along with, “men, too”.

This nonsense has to stop!

Men should let go of toxic hypermasculinity and start having their own conversations. They do not have to wait for women before they start venting. There is no use keeping quiet.

In the grand scheme of things, this patriarchal system of society puts men at a disadvantage. It makes them keep shut in the face of pain and discomfort.

Men also suffer, yea, but they do not have to cry about it the same time women come out to vent. Doing that seems as though they are desperate to brush away the dark smear of pain on our collective psyche.

P.S. Do you know that the average hetero guy gets pissed when women call out men on their BS? They be like, “You’re generalising”. We are generalising, yet they are the ones most protective of their sisters and daughters. They are probably scared other men would treat their daughters the same way they have treated other people’s daughter.

To be honest, a lot of us, women, are tired of the BS heterosexual men throw at us. We are tired!

“The truth is girls hate us, Eric. They are sick of our shit. One day, they plan to make us obsolete – stick us underground where they just milk us for our semen. Boys’ only hope is to start over on Mars.” – Butters, “South Park” Season 20, Episode Nine.

Onyinye Njoku: So You Just Had a Baby? Here Are Some Things You Should Know