Cisi Eze: The Choice to Stay in an Abusive Relationship 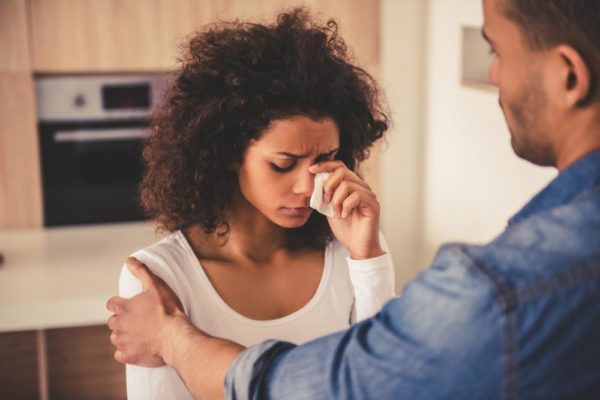 Your body has become a canvas of red, blue, and black.

Your mind has become a wasteland wrecked by cruel words that fall like hail.

You’ve built an altar to that which loathes you (…)

My mind says I should make this a poem.

Loving someone that hates you is stupid, not romantic. Toni Braxton’s “Let It Flow”, which was one of the soundtracks of the movie “Waiting to Exhale”, is very apt for people in abusive romantic relationships.

“You see the thing ‘bout love is that it’s not enough if the only thing it brings you is pain. There comes a time we could a make a change. Just let go. Let it flow. Everything is going to turn out right… We all demand respect, but we can’t get respect without change… Sometimes love can work out right; sometimes you’ll never know. But if it brings only pain in your life, don’t be afraid to let it go.”

Emotional Stockholm syndrome is a real thing; however, people that trivialise mental health will dispute this.

Then again, some people romanticise abuse. If you are in doubt, listen to the lyrics of Niyola’s “Toh Bad”. The song goes: “But sometimes it kills me – the kind of things that you do. I’m trying not to cry. Tears are hard to fight. It is hard to let you go (…) I’ve tried to run away from you baby. How can I live without you?”

Well, for starters, there are several reasons, varying from person to person, that explain why people – men and women – stay in abusive romantic relationships. Unfortunately, love is not one of the reasons. Other sinister, negative emotions make us stay. When you consider these factors (emotions), you might not be so quick to victim-blame anyone in an abuse romantic relationship.

Below are few reasons that explain why women stay in abusive romantic relationships:

The first is fear. Fear clips your wings before you know you have the ability to fly. Some of us in abusive relationships are scared of the unknown. The concept of starting anew with someone else could be petrifying. Something about change, a break from routine, is quite daunting. The married ones among us begin to fear what society would say. Society places such importance on marriage, and when your marriage fails, it sees you as a failed woman. There is fear of financial security, too. Not having personal financial strength could hold back a person from leaving an abusive relationship. It could be that he/she gets certain benefits from the abuser.

In a twisted way, imagining our lover in someone else’s arm could stir jealousy in the pit of our stomachs, and we just stay to see if we can it better. Also, feeling we have invested much into a romantic relationship makes us try to make it work. “We have come so far and I just can’t quit. I can’t leave a house because the windows are shattered. I have to stay and fix it.” That is what some people say. But houses are not people. You can fix a house; you cannot fix a person.

Pity is another factor that contributes to people staying with abusive partners. Lover goes on to quote Chicago’s song. “If you leave me now, you’ll take away the biggest part of me. Baby, please, don’t go”.  Abusers are manipulative. They know the right things to say to guilt-trip us into staying with them. We pity them and feel obligated to stay behind because they make it seem as though they have built their world around us.

At times, it could be that a woman is “dickmatised”. The sex is just so good and she does not want to leave. It happens. Talk about toxic, chemical romance.

People in abusive relationships believe they stay for love, but in the real sense, dark emotions are at play. Leaving is not always easy.

Then again, should we feel pity for women that DECIDE to stay in abusive relationships? From the onset, your sixth sense would tell you the person is bad for you. Tell-tale signs float before your eyes. Watch the way they react to other women, especially sex workers. Asides that, it could be that they are manipulative. They seek to control you, too. The prospective lover shows signs of misogyny – talks down your achievements; patronises you; doesn’t listen to you and respect your perspectives; asserts masculinity to the point it stifles you (that is if it is a heterosexual love affair); sees you as a body, not a mind; becomes too possessive. You can’t miss these signs. You don’t stick your finger in fire when you know it is hot, right?

For me, the best we can do for loved ones in abusive romantic relationships is to drag them out of it, because they are not thinking straight. In fact, at that point, your words are like water flowing into a sieve.

Leaving is hard – it is going to hurt so bad, but we all have to leave toxic relationships for the sake of our sanity.

P.S. This post refers to all types of abuse – physical, emotional, and sexual.

P.P.S. Many types of relationship hurt us. They could be romantic, filial, business, or platonic, you name it. There is no point staying in situations that don’t favour us. Maybe we are scared to leave out of fear of the unknown. But “if you never try, you’ll never know”.

P.P.P.P.S. I’m in an abusive relationship with Arsenal. Why haven’t I left? I don’t even complain about the club anymore because it doesn’t make sense. I mean, I can quit, but I have decided to remain. There is Chelsea and Barca, but look at me. Why do I keep hurting my feelings by myself? Kanu Nwankwo that made me fall in love with Arsenal is no more there, but here we are.

Diaspora Chronicles: My Experience with Nigeria Churches in America

Now That the Honeymoon Is Over! The Transition From Hot Romance to Hot Reality