Why Is Everybody Talking About "Against The Run Of Play"? #LiterallyWhatsHot 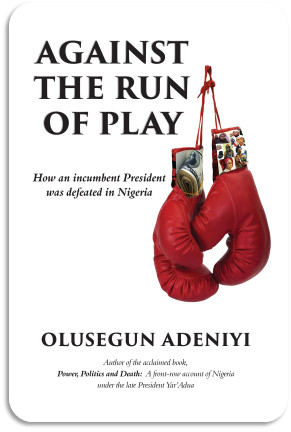 Nigerian political books, for the most part, are based on biases … ethnic bias, religious bias, party bias, and my all time favorite, ego bias.

So I was fascinated when  I received a copy of Against The Run of Play from Kachifo to review. I was fascinated because I was curious about the type of bias I would find in this political book. But I was quite disappointed …

While there is no such thing as zero bias, I must say that Segun Adeniyi’s Against The Run of Play comes quite close. It is one of the most detailed and unbiased analysis of politics in Nigeria that I have read in a long time!

Why? Because Segun wrote the book based on facts, actual interviews, and real verifiable quotes from active politicians—scores of active politicians to be precise, and not just any low-level politician, the top level ones. A fact that Segun lets us know in the 3-paged acknowledgment section of his book where he nonchalantly drops names of politician after politician.

But jokes aside, Segun has direct access to a very wide and diverse range of politicians and dignitaries in Nigeria, which is what makes this book sparkle without bias.

In writing the book, Segun set out to answer one simple question, which was:

“How the heck did Goodluck Ebele Jonathan (GEJ) become the first incumbent President in the history of Nigeria to lose to the challenger Muhammadu Buhari (PMB)?”

A lot of the reasons stated in the book are things you already knew about, including GEJ’s poor handling of the Chibok Girls crisis and his seemingly lackadaisical attitude towards corruption aka Stealing is not Corruption. But what Segun does that makes his book different, is that he gives you more depth to the issues we thought we already knew about.

I mean I knew that America played a key role in our elections, but I never knew that they actually placed naval ships on the Gulf of Guinea in the days leading up to the election! Maybe it was their way of pressuring GEJ to concede the election? Who knows?

But that is the type of deep information Segun shares in his book that makes it worth the read.

Excerpt from #AgainstTheRunOfPlay by Segun Adeniyi

Another revelation—and this made me clutch my book tight in amazement—was when Patience Jonathan called the then Speaker of the House of Representatives, Hon. Aminu Waziri Tambuwal on the phone and said:

“You this Hausa boy, you want to bring down the Government of my husband; you want to disgrace him out of power? Una no fit! God no go allow you.”

I mean I knew Patience caused a lot of headache for GEJ, but this book revealed so many more personal clashes she had with other politicians that made me go “wow!”

Conclusion: So Why Is Everybody Talking About “Against The Run Of Play”?

The reason is because the book is good, unbiased, and well researched, a rarity in Nigerian politics.

And its additional genius is that it does not just focus on what happened to PDP in the 2015 election but identifies patterns currently happening to APC that could define the 2019 election.

For example, some of the mistakes GEJ made, like absolving MEND of blame even when they claimed responsibility for the 2010 bombing of Eagle Square can be seen in PMB being relatively mute on Fulani Herdsmen.

But the most striking pattern exposed in the book has to be the behaviors of the Presidential spokespersons. The likes of Doyin Okupe, Femi Fani-Kayode, Lai Mohammed, and Femi Adesina who are willing to say any and everything to support their President at the expense of truth and objectivity. And this objectivity is what Segun highlights in the last page of his book, as he drops this advise to Nigerians.

“… to develop as a nation, we must begin to imbibe a culture by which those who aspire to lead our people are subjected to a rigorous process of public debates that will assess their suitability on objective criteria, rather than the religion they practice or where they come from.”

All in all, I enjoyed reading the book and you too can read “Against The Run Of Play” on OkadaBooks today. Plus if you sign-up via http://bit.ly/OkadaInstagram you can get N150 free credit towards the purchase of Segun’s book here.

Excerpt from PDP's internal deliberations on whether GEJ should contest or not. Not one person raised the issue of Jonathan’s capacity to do the job nor his stance on any national issue. The central issue was which zone would produce the next President. Read the hottest bestselling book "Against The Run Of Play" in #Nigeria today on your phone via the @okadabooks app

kechukwu Ofili is a trouble maker, the author of 4 books and speaks at organizations that are tired of hearing the same old stuff and want the truth. He is also the founder of okadabooks.com and blogs at ofilispeaks.com
Feel free to follow him on Twitter or stalk him on Instagram

NaijaSingleGirl: All the Drama that Goes on at the Passport Office in Lagos