NaijaSingleGirl: All the Drama that Goes on at the Passport Office in Lagos 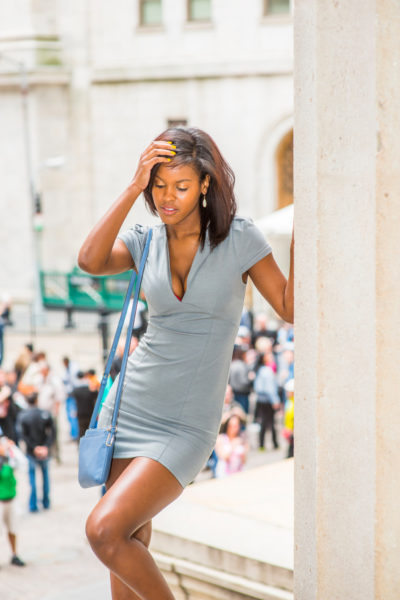 I was told I would need passport photographs, copies of my birth certificate and my certificate of origin to apply for an international passport. No one mentioned the N1,000 and N500 tips here and there.

I met a crowd under a canopy who came for the same purpose when I arrived the passport office in Ikeja. My contact gave me a form to fill and told me to join them. After waiting for more than three hours, I was told my file won’t be processed until I had a guarantor, a challenge that took me two weeks to fix.

When I returned two weeks later for what they call ‘capturing’, I met an even larger crowd triggered by the shortage of passport booklets. Among the crowd were returnees who were there to renew their passport. You know the usual IJGB signs – tattoos, bling-blings, jerry curl hair, weird haircuts, wanna ganna accent, singlets and shorts with winter boots etc.

One guy walked in with a basket ball displaying all of the above signs. It appeared he was there earlier in the day to renew his passport, but left when he couldn’t stand the queue. An officer came out to pacify the crowd and this guy, who decided to be our mouthpiece shouted, “Damn man! Shit iz taking too long. We aint gat all day here. I gat practice by 4 man.”
Then he turned to me and said, “Mest up country yo!” Me, I was just like, O-O

4pm, we were still waiting. Another officer came out to call names and the Americana’s name was exempted. This time around, he broke into pidgin in a clear Nigerian accent. “Officer I don tire to dey wait! Person go come die ontop passport! Na wa oh”
People who heard him earlier were laughing. Then he stormed into the main building angrily. It wasn’t long my name was called in for capturing. Beside the capturing office is an iron gate which serves as a jail and Americana and his basketball were doing time there. Apparently he had gone in to make trouble and one of the no-nonsense officers had bundled him into the jail. This time I heard him swearing in Americana, pidgin and Yoruba.

I walked into the capturing room and the capturing officer took one look at me and walked me out. He said they weren’t going to photograph me because I was not dressed properly. I was befuddled; seeing that I was dressed in a sleeveless maxi dress, which is decent enough in my own opinion. However, I quietly left in search of whom to borrow jacket from, but I found no one.

There was a ‘Nigerian mother’ seated outside with their signature scarf wrapped around her neck. I explained my situation and asked her if I could borrow her scarf for a few minutes. After an eternity of staring at me from feet to head as though my approach was disrespectful, she grudgingly handed her scarf to me.

I returned to the office with the scarf wrapped around my shoulder.
When I overheard another officer say, “This her hair eh,” I knew I was in for part two.

The capturing officer told me to pack my weave. I did just that with a rubber band. He complained my left ear was not visible. I tucked my hair behind my ears. He said my forehead was not completely visible.

I took off the wig.

The man was shocked. Some people present were giggling. A girl who was on the queue for capturing said the officer should attend to other people while she assist me with adjusting the wig. Left for her I would have taken that passport peacefully in my didi hairstyle.

Five minutes of being told to tilt my neck clockwise, semi clockwise and anti-clockwise in front of the camera, I was successfully captured.

By then, the woman who gave me the scarf had barged in to demand for it. I returned it to her and she held it by an edge as though I had infected the scarf with a virus.

One of the officers who gave me tough time had quietly slipped his phone number to me while I signed out. Outside the office, two elderly female officers called me aside and started lecturing me on indecent dressing. They said I was supposed to wear a suit to take the passport so I don’t end up being mistaken for someone who is travelling for prostitution by the officials at foreign airports. I told them it was the work of the devil.
On the good side, I now own an international passport.
Italy here I come!

Why Is Everybody Talking About “Against The Run Of Play”? #LiterallyWhatsHot