Akpo Uyeh: 20 Types of People you find on Social Media 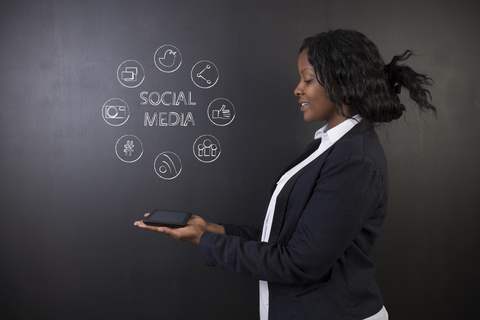 Social media is a community on its own. It could be addictive. It could be enlightening. It could also be depressing and at the same funny too. It has its  fair share of  pains and gains. Sometimes, you feel envious of other people who appear to be living the life. At other times, the drama keeps you entertained.

While some became instant celebrities through social media, some other people do not want the hype and would choose to use social media for relaxing catching up with old and new friends, staying abreast of the latest news and gossip.
Surprisingly, there is another set of people (they are not necessarily old school) that are not even into social media in this time and age, surviving and getting their groove on – Respect to them!

That being said, here is my list of certain people that you find on social media.

The Gbagaun detectors
They are on one mission and that is to correct the grammatical errors of your posts. This set of people are not necessarily graduates of English Language, but they appear to have high level of fluency of English.  For example, they would correct the use of ‘Am greatful to God’ with ‘I am grateful to God’. They usually target celebrities, their peers and any other person concerned.

The stalkers
These set of people love going through people’s pages to know what they have been up to, where they at and who they are with? I think the exes mostly fall into this category. Stalkers are also diehard fans of celebrities, the people who are crushing on someone and enemies too fall in this category – they want to know if you doing better than themselves.

The opportunist
These people don’t waste time. They use social media for business activities. They have something to sell, an idea or skill, they put it up on social media. No time for play play; it’s strictly business.

The mentees
Since they do not really get the opportunity to meet that celebrity they always wanted to be like everyday, they choose to follow them on social media. These people comment and like every post that the celebrity puts up. They know what the celebrity is up to and what he/she is doing. Occasionally, they might ask for favours from their celebrity mentor.

The jokers
Their motto is ‘life is too short to wear a frown.’ They are always making jokes online. Is it updates, memes, breaking news or photos? They are just too hilarious. We need them after a long stressful day.

The spam friends
In the first place, how did this person connect with you? You do not have any mutual friends. No form of values or similarities but they still find you and send messages that only God understands what they are driving at.

The oppressors
Shout out to the ride or die chics/guys out there. Today it’s Dubai, tomorrow it’s a boat cruise in the Caribbean. They rocking latest designer wears. From head to toe, they smell money. To add to your envy, they seem to get all the likes and comments… Phew!

The family-oriented
To them family is everything. They appear to have the perfect life with lovely partner, cute children, good jobs and all. You really admire them and sometimes feel envious when they start posting pictures of their family and all.They should be #FamilyGoals.

The over-schooled
As much as you try to understand what they are posting, you cannot seem to get grip of the direction/message of their post. Their analyses are too complex, and spiced with big grammar. Most times, you just have to waka pass or scroll down.

The boring
They are better off keeping quiet, because your reaction to their posts would be like Duh! So what’s this one saying now???

The football freak
The only time they get to post something is when a  football match is going on and they are highly rooting for their team to win; after that, it is back to their tent.

The motivators
They are always posting inspiring messages and sermons. You need them in your spiritual walk so as not to backslide.

The Atheist
They believe there is no God. Religion has been and would always be an issue for them. They are open to debates on whether there is God or no God.

The silent
I’m still trying to understand this people. No profile picture, no posts, but they are always online. Ladies without any form profile picture are major culprits. Why the hidden identity? Maybe something is fishy or they have their reasons best known to them.

The news breakers
Even before CNN gives the breaking news, these people know what’s happening and are the first to dish trending news. They have their ears to the ground and don’t slack. They have their niches – be it sports, local news, entertainment, movies, foreign news. Some are well rounded.

The competitors
When someone posts a photo, they would post their own. If someone makes a comment, they make their own too. To this people, it is more  of a competition than a social platform of people.

The favour seekers
They bug you with endless pleas for favours and most times it is for financial assistance. You won’t blame some in need of jobs and so they deem it best to disturb influential people for assistance.

The post and delete
When nobody comments or likes their posts, the next thing is to delete it sharp sharp. I think they are controlled by people’s reactions. At other times, it might be because they said something too controversial or derogatory.

The noise makers
They bombard your timeline with their posts and photos as if they are the only ones in your friend lists. Sometimes you wonder if this person has a life outside social media.

The rude ones
These are the people that are too lazy to type or communicate effectively. Someone is celebrating her/his birthday, and instead of typing ‘Happy birthday’ instead they type ‘HBD’ and the likes. You know now! They are experts in short-hand.

Did I leave any other set? Please add yours.

Aunty Bella: Miss. I Don’t Have His Mumu Button

Ayo Al: When It’s Hard to Love that Child You Just Birthed