Kemi Smith: When Your Boss Assaults You 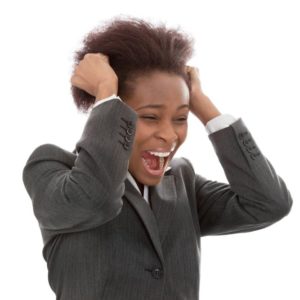 Domestic violence is a hard topic to discuss; but even harder and less talked about, is assault in the workplace. A good number of people are assaulted in their place of work, but can’t and won’t talk because of fear of what the consequences will be. It’s not an easy thing to decide to leave a job that pays…where will the next job come from? It’ll take a lot of courage (which most people don’t have in Nigeria’s current economic climate) to leave a job that pays anything at all.

Before working in the place that I do currently, I’d worked in an organisation where I worked with the coolest bosses ever. I’m talking about the kind of bosses who welcomed new ideas; bosses who were deeply concerned about staff welfare; bosses who made it so much easier to jump out of bed every morning because with work life was good. The problem was that the job wasn’t very rewarding… financially. By the end of last year, I decided I had to get a new job.

Honestly, I’d never considered assault in the workplace to be a thing, given the kind of bosses I’d had in previous jobs (a real job and as an intern). I just assumed that things would be normal at best. Imagine my horror when just about a few weeks into my new job I saw my boss flare up for the first time.

Flaring up has to be the most predictable response to high stress situations where incompetence is displayed, I thought. Erm, no! My boss shoved the employee involved and finished it with a nice string of curse words. Still, I didn’t think much of it; moreso, because of personality differences. Then, I started to recognise that the largest determinant of how the day will go for every person who works in that organization is what mood our boss walks in with.

Very recently, I witnessed a fellow colleague being punished and slapped across the face by our boss. and it left me mortified. Thinking of how terrifying it is to work in this organization, all of the psychological trauma one goes through trying to figure out if the boss will be happy or angry today, I got angry.

I think the most dangerous part of jobs like this is how much they wear us out psychologically – a kind of fear that rules how you approach work assignment, your emotional wellbeing for the day, your relationship with fellow employees. Unfortunately, you find yourself transferring the boss’ aggression to your colleagues, who already have to deal with all the stress of that kind of environment.

Upon further research I found that there is a part of the Nigerian law that says “A person who strikes, touches, or moves, or otherwise applies force of any kind to, the person of another, directly or indirectly, without his consent, or with his consent, if the consent is obtained by fraud, or who by any bodily act or gesture attempts or threatens to apply force of any kind to the person of another without his consent, in such circumstances that the person making the attempt or threat has actually or apparently a present ability to effect his purpose, is said to assault that other person, and the act is called an assault.”

If the law is this clear on what an assault is, which is a very punishable offence, why are Nigerian employers still comfortable enough to verbally and physically abuse their employees?

I have watched my employer say some of the most disrespectful things to my colleagues, watched my boss repeatedly hit a fellow colleague, and use curse words so strong that I’ve questioned if my organization was an actual workplace or a POW (Prisoners Of War) camp. How do employers give themselves so much guts to talk disrespectfully to a fellow adult? How?

I’m not a lawyer by qualification, so this isn’t a what-to-do-when-your-employer-hits-you post, it’s more a cry for help to people who know about the law and can do something about it to please do something because honestly I am powerless to do anything – except quit the job of course, but what about the many other people that can’t afford to because of urgent responsibilities? This is also an open invitation to you readers to share your experiences, for comfort so I know I’m not alone in this. Maybe I can learn from the way you handled a similar situation.

The unspoken rule in Nigerian workplaces mostly is “the boss is king, then the customer. Every other person is a slave”. Outside of my own work situation I’m beginning to recognise that there are a lot more people being assaulted by their bosses, people who won’t confront their bosses like me because the day they do, they lose their jobs.

I believe that as a society we should be supportive of those employees who speak up. We should stand with them to speak up against assault in the workplace, instead of making them feel doomed and foolish.

The mentality of enduring any form of abuse because ‘it won’t last forever’ has to stop. It is never humility to keep hoping that things will get better someday, when you’re not doing anything to make it better.

Tunji Andrews: What Building Lean Muscles Taught me About Entrepreneurship