My long term goal is to be on the Forbes (world’s richest) list. It’s become an obsession in recent times, and I’m currently looking to form a #ForbesAspirant crew. It’s hard letting out this piece of information because I don’t know anyone who has such “outrageous” dreams. Of course, I know people who want to make big bucks, but that’s just about it. They’re okay with 30 million in their account. 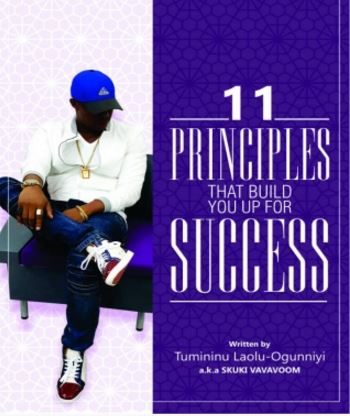 From all the Be-Successful-Or-Die-Trying books I’ve read, I know getting rich isn’t all about slaving away. Some books ask that you know and understand Purpose. Other books call for smart work, and the rest throw around a few other hardcore principles that are usually guaranteed to keep any business person on track.

Skuki Vavavoom has blessed us with one such book titled 11 Principles that Build You Up for Success. If the author’s name seems familiar, it’s because you know him from that Pass the Agbara song. Yes, the Skuki boys are now authors. Move over, Chimamanda.

His first principle is Perception, and it is a great starting point as it deals with conquering and harnessing mental power. I believe everything happens in the mind before it manifests in the physical.  He seems to think so, too and advises on the importance of positivity, resilience, and discernment whilst doing honest work. 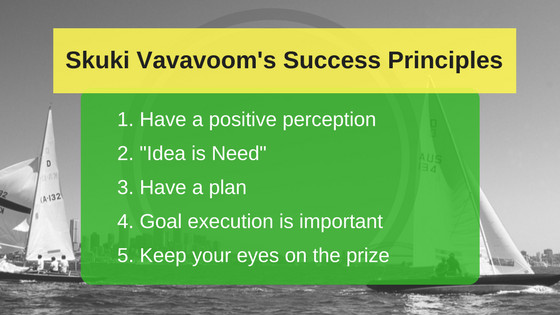 Under the second principle titled “Idea is Need”, he revisits the well-known concept of ideas being most viable when they solve a need. He approaches this principle by focusing on the Knowledge-is-Power tenet. Only a few people actually open their eyes to opportunities around them. Because most people lack the drive to acquire knowledge, they spend years contemplating “big” business opportunities while seemingly irrelevant (need-addressing + money-spinning) opportunities pass by. Under this principle, he also encourages people outside the business sphere to brainstorm and come up with ideas. 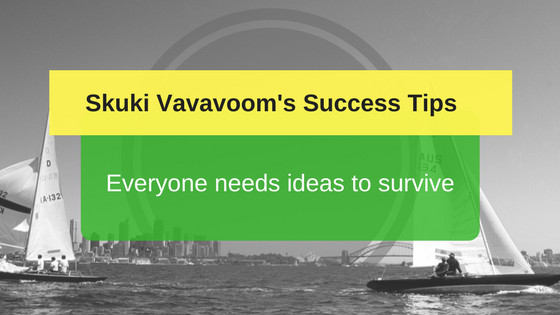 Of course, for every business opportunity, we need realistic plans (though not so realistic that they’re limiting in reach). It’s okay to dream big and take risks. “You cannot think or hustle like a normal person and expect to make abnormal money,” Skuki Vavavoom says. “Never limit yourself.” 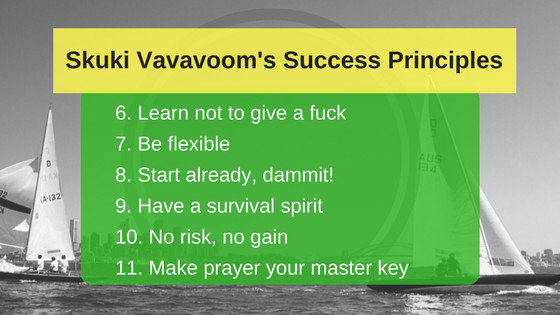 My favorite principle is the whiplash, no-nonsense one: Learn not to give a fuck!” Guess what? Nobody owes you anything, and you owe nobody nothing. #Realist

Everyone has an opinion of what you’re supposed to be doing and how they think you should go about it. They’ll advise or make a mockery of you or do whatever it is they want to do. When they’re done, your job is to think properly, pick out useful information, and chuck the rest of their advice where the sun don’t shine. Do what you have to do to get where you’re going.

I believe everyone is different. Business execution varies even if it’s for the same business a million others have started. If you fail, you fail. Suck it up and move on. The good thing is that you’ve learned, but at least, you’d never spend years wondering what would have happened if you’d just gone with your gut.

You know, knowledge lies in strange places. I am pleasantly surprised with Skuki Vavavoom’s book, although I should have thought of him differently seeing as he has done remarkably well in the entertainment industry.

Even though his principles are nothing new, I’d have to admit that he hits the ball hard with his views on conquering the business sphere. He did a lot of good to my soul for someone spewing the same old shit. Let’s just say his shit is more relatable, more homemade.

Dear Reader, let’s make a pact to get on the Forbes list within the next ten years. Deal? Deal.

Want some great business advice to help you on your journey? Get a copy of 11 Principles that Build You Up for Success here on the OkadaBooks store. Oh, and if you want to hop on that #ForbesAspirant train, leave a comment with business advice for business newbies and oldies, too. Let’s rub minds.

Chiamaka Onu-Okpara is an editor who has experience brushing up fiction, creative non-fiction, and academic pieces (Social Sciences and Humanities). She also writes short stories and poetry and has been published in Ake Review, Apex Magazine, and Kalahari Review amongst other places. One of her poems is forthcoming in Strange Horizons.

Badoo Killings: How I was Wrongfully attacked by Residents – Facebook User

Vanessa Onyema: Evans Must Pay For His Crimes