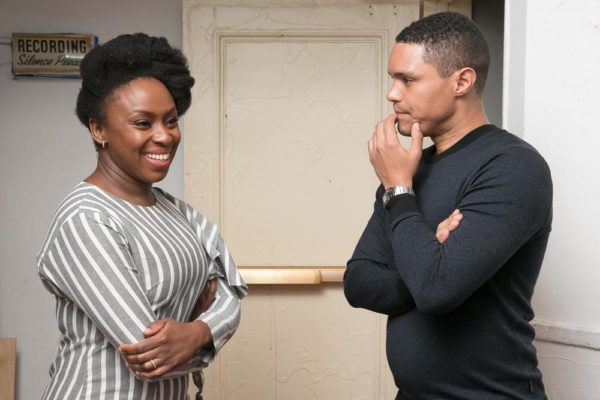 I was watching an interview with Trevor Noah and Chimamamnda Ngozi Adichie at PEN America. And I was so intrigued by the conversation. Chimamanda is a world-renowned novelist and a major advocate for feminism. She has written a lot of books such as Half of a Yellow Sun, Americanah, and Dear Ijeawele. During the interview, she spoke about when she was in college in America; her teacher had asked them to write an essay. The teacher had asked who wrote the one he had in his hand, and she stood up. He was very surprised being that she was black. He expressed this surprise to her and she was stunned, thinking to herself, “does this man not know I’m Nigerian and we’re brilliant?” But what she didn’t quite understand at that moment was how being “black” in America was very different from her reality. It had a very negative tone to it. It wasn’t something to aspire to.

Blacks in US are less educated. Speaking fluently and coherently is seen as being too white, too polished, not black enough.

The average Nigerian is raised with a lot of ambition, to go to secondary school, university, secure a masters and to work at one of the conventional professional jobs. The average Nigerian is what the blacks in America might call the overachiever. Being black in America couldn’t be more different from the Nigerian reality. Going to college is a pretty big deal and working as a professional is a huge reach. Yes, they are always exceptions, but the average black in America is not very ambitious and is okay with working minimum wage jobs, having kids, probably not get married and they’re good. This is something that has been passed down to generations due to the racial oppression and whole other factors.

Trevor Noah is a brilliant South African comedian who brings an intellectual spin to stand up comedy. He is mixed race and was born in the period of the apartheid. When it was a crime for black and white people to mix.

In his book , Born a Crime, he spoke about not being able to walk on the road with his parents because it would raise suspicion and if caught they could get separated. He then spoke about the time he has spent with Nigerians, how he’d watch Nollywood movies with his Nigerian friends and he’d express his distaste for them and how he thinks they should be watching Hollywood movies instead, because they were better. His Nigerian friends would then tell him how they’d rather watch their own culture, their own people… because that’s what interested them. And he never understood why Nigerians as a whole were so confident in themselves, because he clearly wasn’t. He grew up in a country where, eve after the apartheid, there’s still an underline of racism, and they are almost taught to aspire to “whiteness”. The blacks are mostly poor and the whites have the best jobs and cars, so it’s almost normal to strive towards that and aspire to it.

This conversation had me thinking a lot, because I got so fascinated about how these two brilliant people who I look up to, so successful at their different fields. They’re both African, yet so different. I thought about how our environment plays a huge role in how we see ourselves, and how the world sees us; how being black in Nigeria was different from being black in South Africa and also in America – same skin colour yet very different perceptions.

Nigerians are the most confident people I’ve ever come across; I say this with no sense of bias. I sometimes wonder where we get this innate confidence. Probably because we’re a completely black nation, and race is completely oblivious to us, so we bask in our abilities and uniqueness.

Ethnicity is equivalent to race to us. So where other nations dwell on the colour of their skin, we dwell on ethnicity and religion.

Nigeria has a huge class divide, but even the average lower class Nigerian is just as confident in themselves as the middle or upper class. I remember watching a movie with one of our house maid years ago and she said “she never understood why most people wasted their money traveling abroad. According to her, she watches their movies but doesn’t know what’s so fascinating. She prefers Nigeria. Not to say I agree or disagree with what she said, but I found it so interesting, how someone of her status who had never been out of the country, little exposure was so opinionated and convinced in her beliefs. That right there is a typical Nigerian, and I think that is one of our best qualities.

I am definitely a fan of traveling, because I love the exposure to different cultures, but there’s just so much about Nigeria that you can’t find anywhere else in the world. This is a character trait I believe other countries refer to us as “arrogant”, because as much as how imperfect our country might be we are still very proud people and unapologetic about it and no matter where we are in the world we eventually dominate and conquer the territory.

My name is Eva Bozimo and I’m super proud to be Nigerian.

Ruby Igwe: Why We Stay…In this Country Where Cattle in the Cities Greet you Daily

Nkem Says: Being the Good One is Killing Your Relationships

Eva Bozimo is the editor-in-chief of the life style site candid lips blog. She’s a freelance writer and can be reached for writing articles for magazines, blogs, script writing and reviews. She created her platform to raise the consciousness level of people and to spread positivity. Also to recognise the challenges we face everyday, especially in Africa. Find her on https://evabozimo.wixsite.com/candidlipsblog Instagram: @Eva.chanel/@candidlipsblog Twitter: @EvaChanel