“In many other countries, Christmas meals must be complicated, sophisticated and dressed up, otherwise people feel that Christmas has been taken for granted. The Nigerian Christmas stew is 70 percent psychological fare and 30 percent gastronomical fanfare. The desperation to mark Christmas in some special way remains relevant. Give the villager roast turkey dressed with the most expensive ingredients in the world and he will still just want his Christmas rice and stew. The psychological and gastronomical balance adds up to the same 100 percent no matter what…

The rice is Uncle Ben’s parboiled rice. It’s imported, but the prestige given to Uncle Ben’s rice, which isn’t at all special, is peculiarly Nigerian. I think we might still find the kindly black man’s face on the orange box reassuring. The meat in the stew is the tough old layer chicken that wandered the village all year. All in all, a simple meal, yet Christmas embraces it as the best fare of the year. Christmas will never be Christmas without plain, simple rice and stew. This is a uniquely Nigerian story.”

People talk and write about a wide range of topics, from socio-economic dynamics to politics to gender fluidity, but it is rare to find people discuss Nigerian food with the eloquence and detail employed in addressing other issues. We eat, and (for the most part) we love what goes into our stomachs, but for some reason, it is difficult for us to apply passion when it comes to analyzing our local dishes. There are a few food blogs and Youtube channels here and there, but they barely scratch the surface in respect of what Nigerian cuisine is all about. 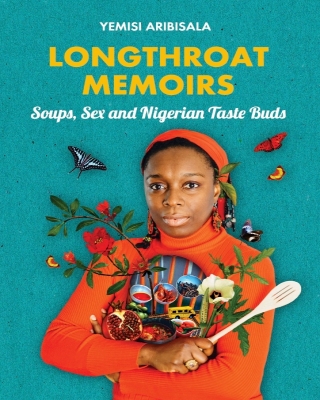 Yemisi Aribisala, an erstwhile food blogger for (the brilliant but now defunct) 234Next, attempts to stretch the complex narrative surrounding Nigerian food with “Longthroat Memoirs”. In this compilation of 41 essays, she navigates previously uncharted territory in discussing what Nigerians eat, the manner in which they eat, and how these delicacies come to life. She describes in detail, the creative process involved in whipping up some of this country’s popular delicacies, and for those more disposed to visuals than literature, there are about 20 pages worth of photos to illustrate what she is talking about. Not only do cooking ingredients like mushrooms and dawadawa get the chance to shine here, erroneous assumptions by Europeans about African food are shown up, and kitchens assume the role of playgrounds in these pages.

It’s not just about the peppery stews and meaty soups though; in this book, Aribisala traverses cultures, bringing to light through food the similarities and differences that exist among Nigeria’s diverse ethnic groups. She dwells on varying culinary techniques, existing stereotypes about particular regions, behavioral patterns across cities, and foreign impressions about Nigerians. There is room for the sex talk too; while not explicit, there is a significant elaboration on food components like snails that have sexual connotations, meals that serve as aphrodisiacs, and a few cooking-pot tricks to capture (and maintain) a man’s attention.

The book starts with a set of gripping essays, then horribly slows down to the point of inducing sleep, before gradually picking up again. In those not-so-exciting portions, neutral readers would feel like they are going through the pages of a regular food blog laden with lengthy recipes, but a lack of patience would stand in the way of important lessons about culture and small intestines. Anyone with a passion for cooking would find “Longthroat Memoirs” totally exciting, and for those looking to learn new moves in the kitchen, this book is instructive too.

Aribisala was born in Ibadan, raised in Lagos, married into a Cross Riverian family and obtained her degrees from England and Wales, so there has been a great deal of traveling, which makes for the rich cultural experience that influences her writing here. Those from the northern and more central parts of the country may feel hard done by, however, given the (seemingly) scanty representation of their dishes, but it’s usually better to write less than to write from an uninformed point of view, and in any case, the field is large enough to discuss Northern Nigerian food in detail. Some skeptics may also hint at subtle reinforcements of patriarchial theories on a woman’s place in the home, and we have seen the #WifeNotCook hashtags, but this is not sneering at certain worthy causes, this is the telling of Nigeria’s stories with grindstones and graters. There is the question of feasibility in executing these recipes too, considering the fast pace of commercial cities like Lagos, but Aribisala is not imposing her ideas on anyone.

“Longthroat Memoirs” is not just a collection of food articles, it’s a lot more meaningful than that. It may be fluctuating in pace for neutrals, but it is in many ways, a guide to Nigeria’s culinary practices. Aribisala portrays cooking as the art that it is.

You can get a copy of Longthroat Memoirs on Okadabooks. Click Here