BN Hot Topic: Is Expecting Men to be Financially Buoyant by Default a Part of Patriarchy?

It’s a reality that cannot be denied: men are expected to go into relationships with deep pockets.

No one will be surprised to learn that there are men who pay their wife’s and/or girlfriend’s allowances. But that’s going too far, even.

In relationships, including marriages, most of the time, men foot the bill.

This is not to assert that it is women who perpetuate this expectation. Certainly, men exist whose egos and self esteem sit delicately on their ability to provide.

The question is: this expectation, this responsibility, is it time to strike to down, let it wash away with the passing tide of patriarchy?

A Twitter user, @Monaayy, believes so. She has charged her followers to do away with “broke shaming.” Expecting a man to be financially buoyant simply because he is a man is akin to expecting a woman to be domestic simply because she is a woman, she said.

Do you think this is true?

See her tweets below, and let us know what you think: 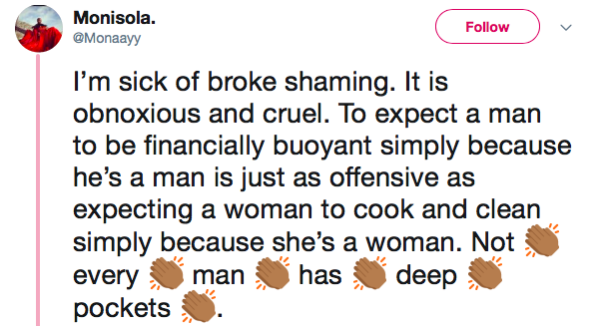 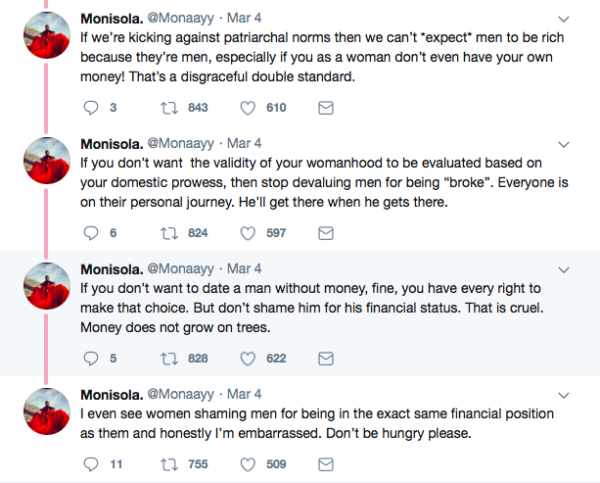 Your Better Self with Akanna: Know Your Craft