Dienye Diri: Any Act of Parenting After 18 Years is Damage Control 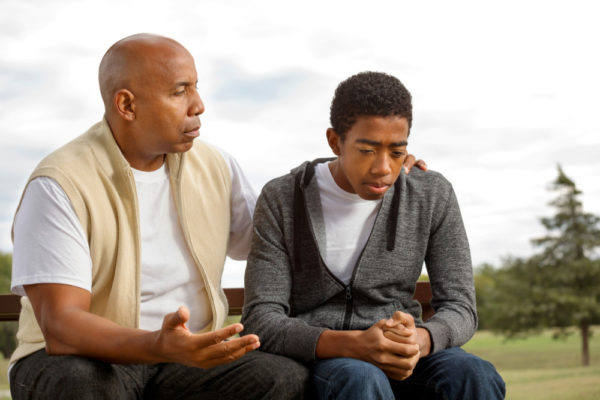 Your three year old son throws a stone from the balcony of your two-storey building. The stone hit a neighbor on the head and injures him. You come out and apologize to the neighbor on behalf of your three years old son. You even tell your son to say sorry to “uncle”. He does that and “uncle” is okay. He ignores your son’s action. “Uncle” is fine now. The wounded neighbor understands that it was just a child acting and that he didn’t know what he was doing. Twelve years later, your son is now fifteen, and has a very good knowledge of what is right and wrong. Again, he throws an object down from your two-storey building which injures a neighbor’s child. The neighbor comes out and this time insists you have to take their child for treatment. You have to take responsibility for your child’s action. You take your neighbor’s child for treatment and afterwards, you come back home to reprimand your child for acting foolishly. Three years down the line, your son is now a first year student in the university. Your son throws an object into a crowd, and it falls on someone’s head. The victim faints and is rushed to the hospital. Your son is apprehended and handed over to the police. He is charged to court, and the prosecutor pleads malicious intent, and prays the court to sentence your son to prison.

The weight of expectation on you (as a parent) from the society stems from the fact that you are a parent. It is your responsibility to train your child. A parent is a person who has the responsibility of care for a young person or child. Parents can be natural (in which case your gametes resulted in a child), or unnatural. A child, as defined by The Child Rights Legislation in Nigeria is a person below the age of eighteen years. Put differently, the law says that as long as your child is eighteen and above, he is no longer a child. Safe to say that the law expects your child to be able to answer for himself. At this point, the law expects your son to have been fully prepared for society. The constitution now grants him some rights and privileges which hitherto were not available to him. The law is now beginning to treat your child like an adult! Now the law says that at eighteen years old, your son can smoke, drink a beer; your son can drive a car, enter into a legally binding agreement, own a company; but most importantly, your son can go to jail if he deviates from the law.

Considering that the law expects all these from your child at eighteen, it implies that by eighteen your child should’ve known the basic things he needs to face society. You should’ve taught him. And if by eighteen your child is not ready to face society and the world outside your home, I can aver that you failed in your duties to that child as his/her parent. If at eighteen you drop your daughter off at her college campus, and you’re afraid for her safety, not confident that you have raised a fine woman who is ready to face the world; you failed to prepare her for society and what comes therefrom, you failed in your parenting.

I will tell you why.

Parenting happens from age 0 – 18 years. You are a mother/father for life, but a parent for only eighteen years. It is in the first eighteen years of a child’s life that you have all the time in the world to install every software your child will run on in their adulthood; including an anti-virus software. Whatever software you fail to install in your child, society will install when they get out there. Your anti-virus (rebukes, warnings, teachings, corrections, disciplines, admonitions, reprimands, etc.) will help shield them from malicious programming from society.

In the bid to parent a child, some go to the extreme. This is the point where it gets difficult to tell if you’re parenting or overparenting. Much as not giving enough parenting can have catastrophic effects on a child’s overall progression and disposition, overparenting can do moreso.

Overparenting happens when a parent exerts excessive parental control deep into their child’s adult life. It happens more often than not, as a result of a parent not being overly certain about their child’s readiness to face society, even in adulthood. It can also be as a result of a parent being so protective, and not wanting their adult-child to make bad choices. Truth remains, that if a parent confidently raised their child to take on life, the parent will not be afraid to let their child make choices, make mistakes, fail, and learn from failures. These are the things that help form the total adult child.

For some reason, your child will leave home someday; meaning that you will have to suddenly “give up” your choking influence on the child. You will no longer be able to continue your influence on a daily basis. It doesn’t take a genius to surmise that it might have a tremendous negative impact on your child. The child might then feel like they’ve been left in an apathetic vacuum; frustrated, and not knowing how to proceed or what to think or feel. They simply haven’t been taught the basic life skill of risk estimation, making choices, and navigating possibilities. Elsewhere, another overparented child, might be thrilled with their new found freedom and might simply not be able to resist the natural temptation to act out and try various risk related activities. Now, having not learnt that behavior has consequences, they may find themselves in bad situations that they are not equipped to handle.

Suddenly the child who has been “spoon-fed” or controlled all their life is thrown into a situation where they are expected to behave as adults and take responsibility for their own decisions and actions. Preparation is much more effective than over protection. It teaches your child to function in the real world. The only way a child will learn to become themselves, and show their true self, is when they are allowed to be themselves. Pure logic.

Train up a child in the way he/she should go, and when he is old he/she will not depart from it (Prov. 22:6); but when you fail to train up your child, and he ends up a dysfunctional adult; any act to parent him in adulthood, becomes damage control. It shows you have failed in your responsibility to that child as their parent.

‘Tale Means Business: 3 Ways to Stand Out in a Saturated Industry

Love Without Boundaries with Bukola Ayinde: Guidelines for Inclusive Education

Dienye Diri is a Web Designer and SEO Consultant. I care deeply about creating world-class, functional and beautiful websites. Husband to my beautiful wife Imoleayo, soon-to-be dad, Chelsea FC fan, and a hardcore Country music aficionado. When I’m not building visually appealing online living spaces, you will often find me writing on my website (www.dienyediri.com) about all things digital marketing, web design, SEO or reviewing the softwares I use for my work.