Sun-kissed days, sand between my toes, pulsating music, laughter, fresh coconut water, grilled fish and peri-peri prawns, ocean waves, the cold sea breeze…these are the memories I will always have of Maputo. The morning I received the e-mail detailing the #MaputowithGoogle trip, I remember I was lying at the back of a taxi heading to Lekki Phase 1.  I sat up straight and screamed out loud.

I have always had this dream of visiting every city in Africa, but the four cities I have visited so far (thanks to budgeting issues) have been within West Africa.  Learning that I would be going to Maputo on a 2-day all-expense tour, put together by Google for influencers and journalists from across Africa (Nigeria, South Africa and Kenya) to help them see how useful Google can be as a holiday assistant was positively overwhelming. Maputo, one of Africa’s most picturesque countries, along the coast of the Indian Ocean, would mark my first foray in Sub-Saharan Africa.

As I always do before visiting any new country or city, I engaged the Google app on my mobile phone researching the city. There were quite a number of negative articles referring to Mozambique as one of the poorest countries in the world with flaws such as a lack of infrastructure, police corruption and the safety concerns of the average developing nation; but I took solace in the fact that Lonely Planet referred to Mozambique as “…easily one of Africa’s most attractive capitals.”

Thanks to the Google Maps app, I kept tabs on traffic patterns between Lekki area and the Murtala Muhammed International Airport; and based on these studies, I knew I had to get to the airport extra early. The flight from Lagos to Johannesburg, where we would lay over before boarding another flight to Maputo, was scheduled for 10 pm but I arrived at the airport 5 pm.

As I stood inside the airport waiting, I couldn’t help the feelings of anxiety. I was traveling with five other journalists/influencers who already knew each other: Tosin Ajibade a.k.a OloriSupergal who I have always admired, Sisi Yemmie whose fantastic YouTube channel I was already following, Anderson a.k.a LazyWrita whose blog I followed from time to time, Olufemi Oguntamu a.k.a Penzaar of Penzaarville and Handle It Africa, and Ozi Okoli, an award-winning producer/presenter at TVC. Being an introvert, would I be able to blend in? Would they be nice to me? And vice versa. 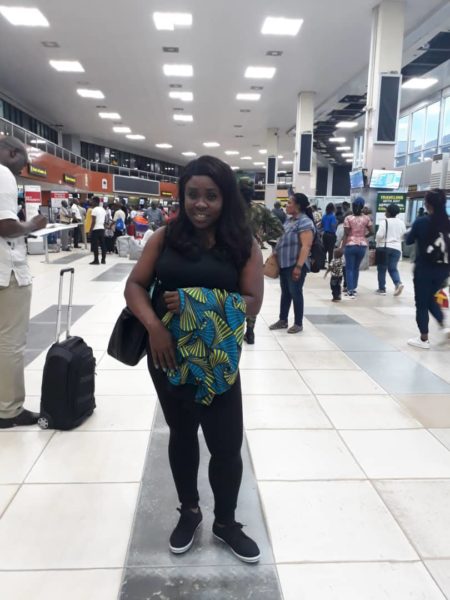 Just arriving at the airport and ready to roll

Anderson and Penzaar were the first to arrive, and in less than five minutes, we were taking pictures and laughing at each other’s jokes. It was as though I already knew them. Next was Sisi Yemmie and Tosin, then Ozi.

After we secured our boarding passes and went through immigration, we stopped to watch the football match between Nigeria and Argentina. We were determined to finish the match before boarding…and we had really hoped for a victorious game, but alas! Nigeria lost the match to Argentina and we left the country nursing bleeding hearts. 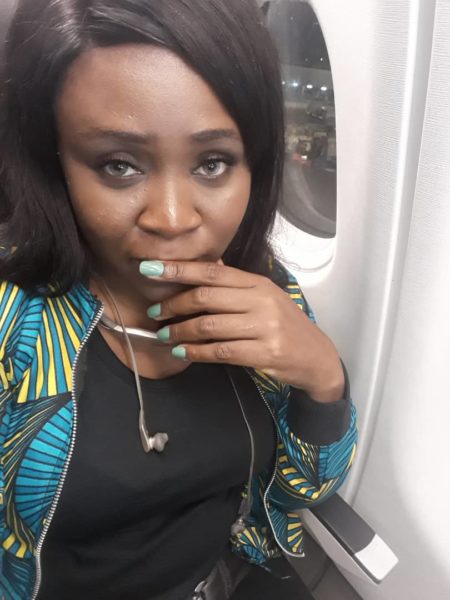 On getting to Johannesburg, My Google Trips app offered numerous suggestions on what we could do in the city, however, we couldn’t do much with the information as we did not have the South Africa visas and going into the city would be risking deportation. Also, it was too cold. It was winter in Johannesburg and somehow, none of us had planned for it. The cold was so bad that even the hot cups of coffee were no help. Penzaar and I strolled around the entire airport until it was about 20 minutes to boarding. We were delighted to hear our flight announced. We were happy to leave. 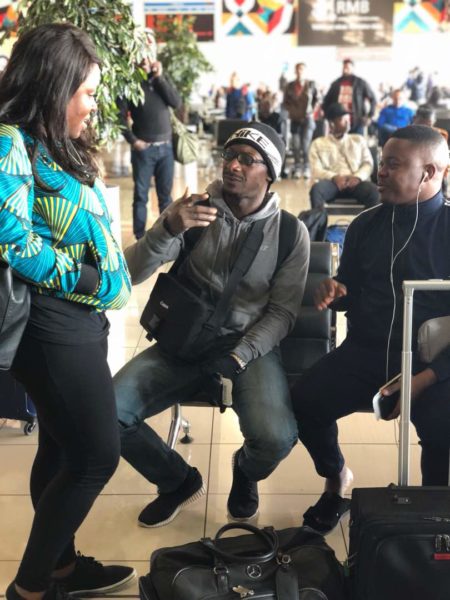 Ozi, Penzaar and I  at the Joburg airport waiting to board 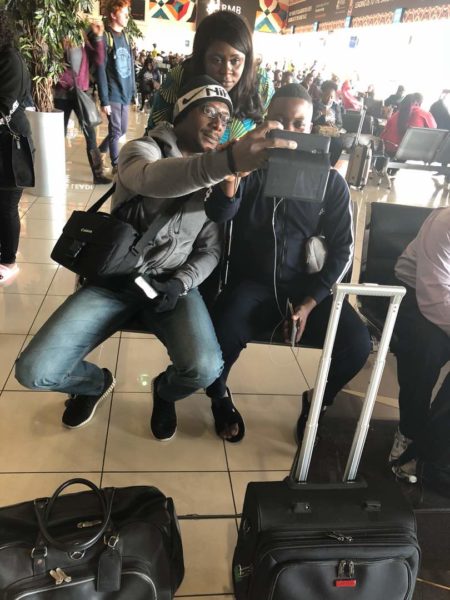 We arrived Maputo from Johannesburg 15 minutes early. And as the plane hovered over the city in preparation to land, I looked out the window and beneath the plane’s belly was a jigsaw of closely clustered shacks and lush trees. The layout was mostly the same pattern as other African cities I had visited. We exited the plane immediately after touch-down and headed towards immigration. The exotic sounds of Portuguese filled the air around, but I wasn’t fazed as I had already downloaded the Portuguese file on my Google Translate app and was ready to tackle any linguistic challenge online or offline. 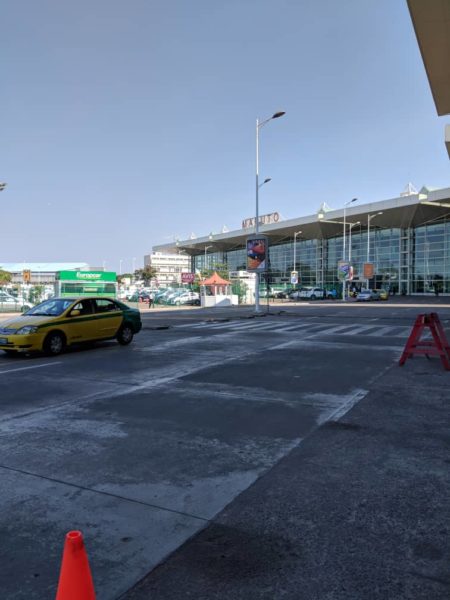 The Maputo International Airport was rather small, compared to the airport at Johannesburg. And while it was clean and organized, it was also old and in dire need of painting. Fortunately, we cleared immigration, and customs in no time. We paid $50 each for a 30-day visa and  showed proof of accommodation in the country a(Radisson Blu Hotel & Residence, Maputo)

Once outside, members of the Google Africa team were waiting. I took a moment and looked up at the skies. They were hazy but blue. I felt the gentle breeze caress my face and instinctively, I inhaled the tropical, thick, humid Maputo air. I was excited again. 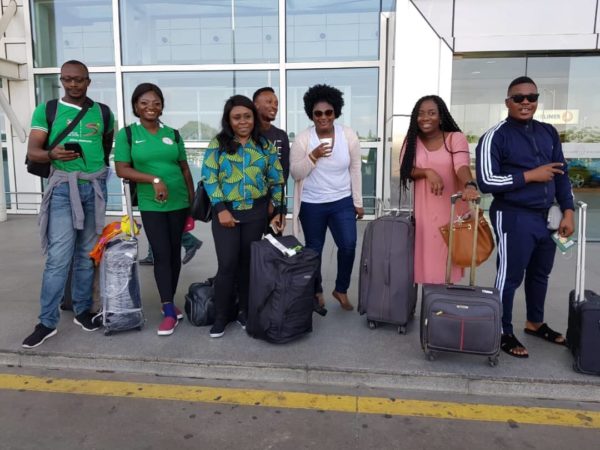 Left to right: Ozi, Tosin, Me, Anderson, Mich from Google Africa, Sisi Yemmie and Penzaar outside the airport in Maputo.

As we drove out of the Maputo airport, the vibrant sounds of the street echoed around us. The was a stretch of shanty towns/ bairros and local markets which sort of gave a Cotonou vibe. Just before the Independence Circle though, we saw a curved wall with bright red frescoes celebrating the revolution. The wall was designed by artist Malangatana Valente, who was also a freedom fighter and revered in all of Maputo.

Approaching the city, however, we saw an outline of modern buildings like any other city in the developed world. 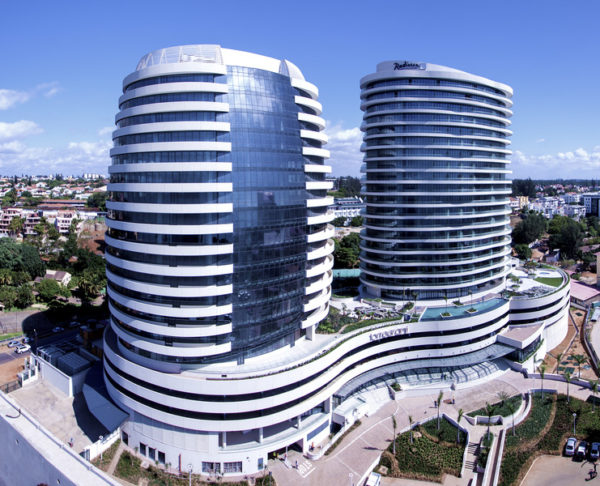 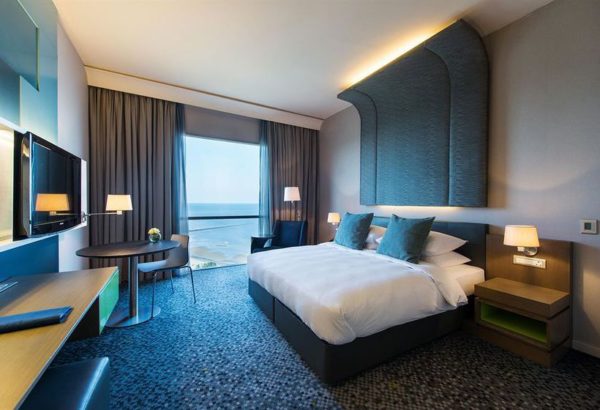 The hotel, Radisson Blu Hotel & Residence, Maputo was exquisite.  We checked into our rooms and had about four hours to rest and have lunch before dinner.

I spent the first few minutes going through the welcome gifts from the Google Africa team, then took a bath and perused the hotel menu. The set menu was a bit restricted as it was mostly a selection of seafood, so I went to Google Maps to check out the review on the hotel food. I was not surprised to find that the popular recommendation was prawns. Apparently,  Maputo serves the best prawns in the continent. I went for Grilled Mozambican prawns, homemade potato wedges, and garden greens. It was super delicious. 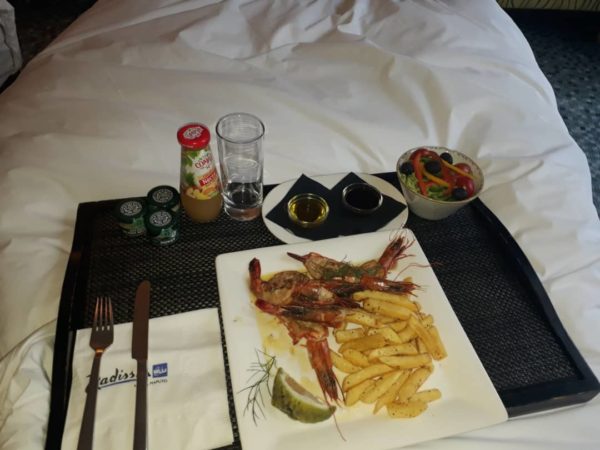 I was able to catch a quick nap before I was roused by the notification from Google Calendar to get ready for the dinner at Zambia.

On our way to the restaurant, I met Susan, another Nigerian who had arrived a day before us. She was quite a ray of sunshine and we kind of bonded immediately. 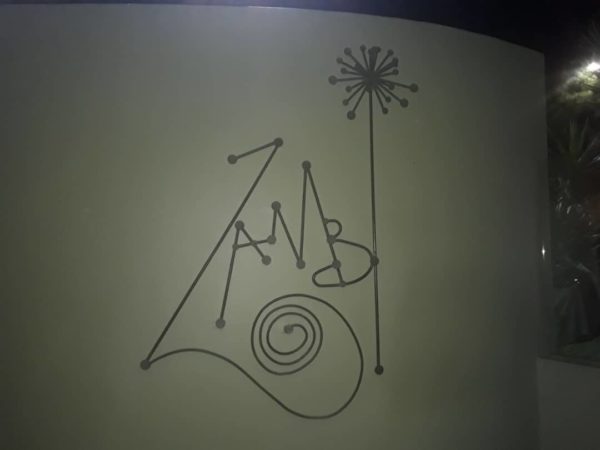 The entrance at Zambi restaurant

Zambi is one of the best restaurants in the city.  Their menu offers a wide selection of mouth-watering dishes, from seafood to European cuisine and sushi and the ambiance is just divine. And while the classy interior has a large indoor seating area, we opted for a long table outside. 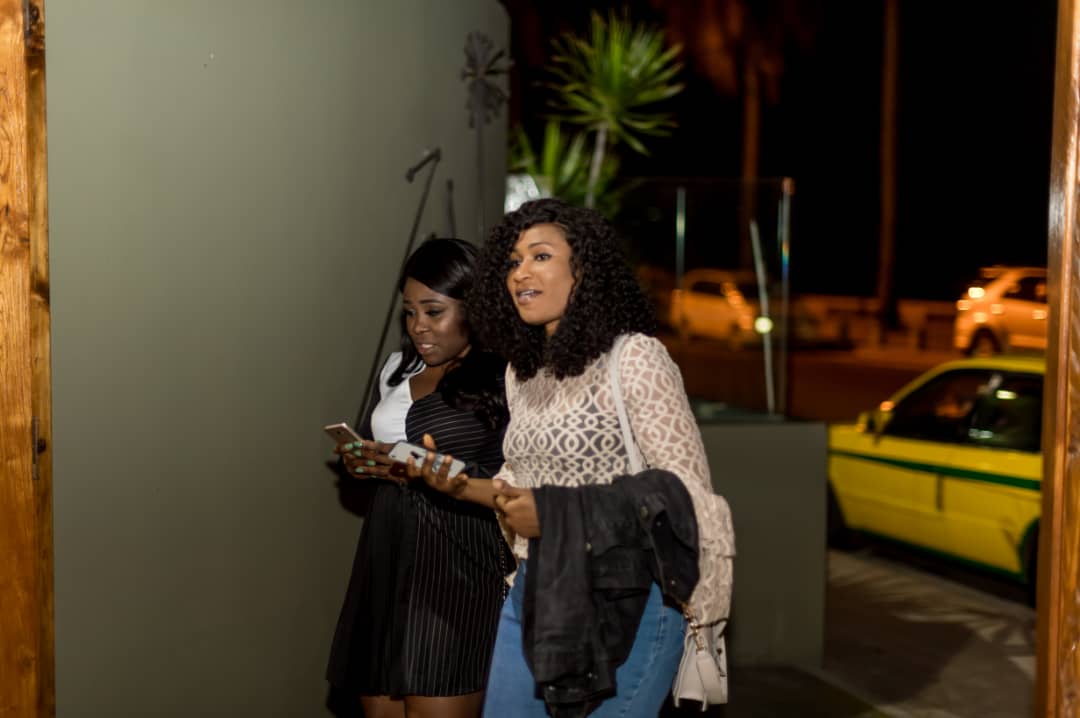 Susan and I walking into ZAMBI for dinner 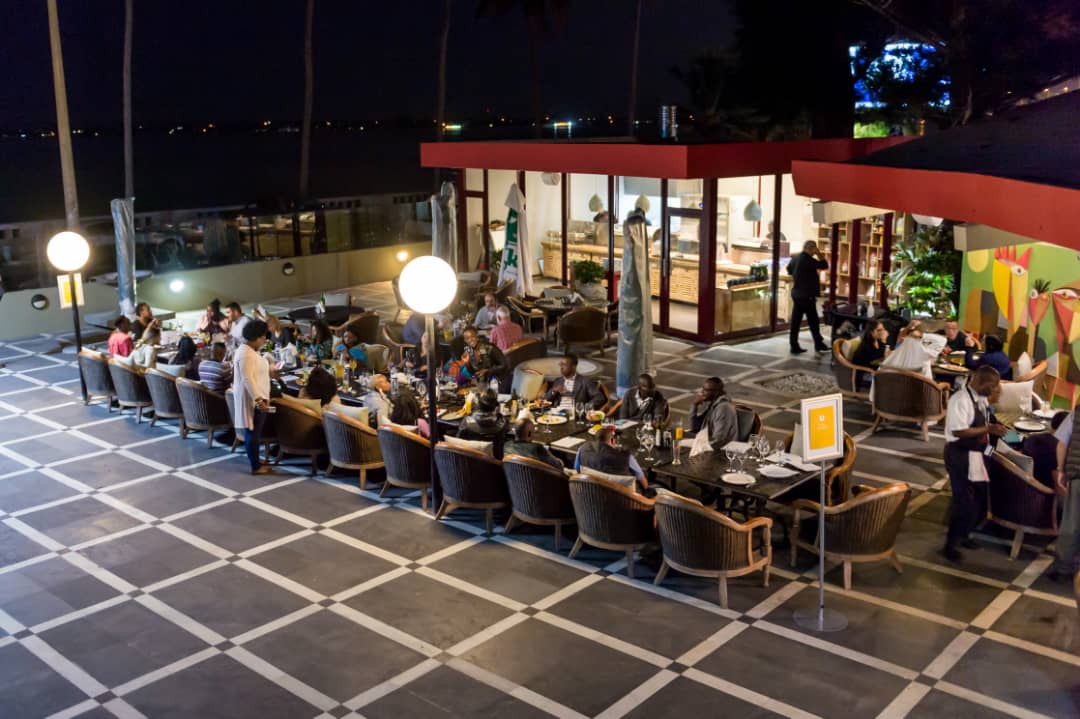 The service at Zambi was great. One of the waiters, named ”Pirish” (which according to him means small plate) taught us some keywords in Portuguese:  Thank You –  Obrigado/a (male/female),  You’re welcome –  De nada,  Hello- Olá, Goodbye – Adeus, and   Please- Por Favor. His English was not very good, so we occasionally communicated with him using the voice function of the Google Translate app.  He further entertained us by performing several songs by Nigerian music artiste, Davido.  According to him, Davido was a huge favourite in Maputo. 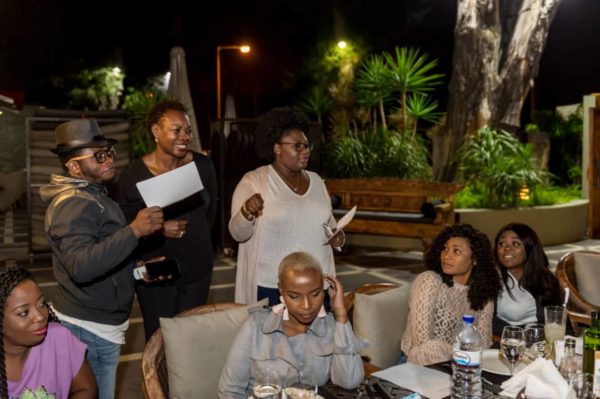 The Google Africa Team Mr. T, Dorothy and Mich dividing us into teams 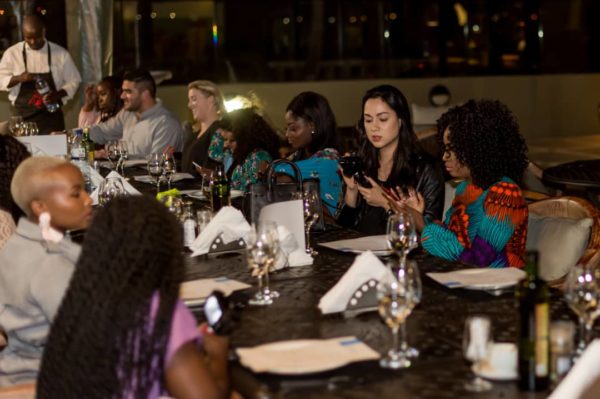 Waiting for the food to arrive 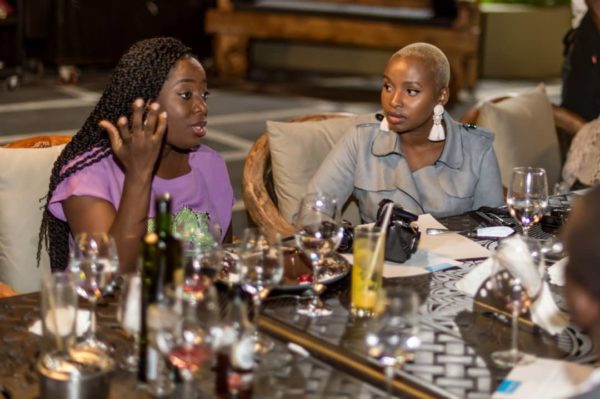 We were offered a 3-course meal. I started off with Mojito and crispy prawns then had “The catch of the day” (which turned out to be a red snapper) paired with buttery potatoes and steamed veggies as entrée, and a moist chocolate cake and Amarula ice cream for dessert. 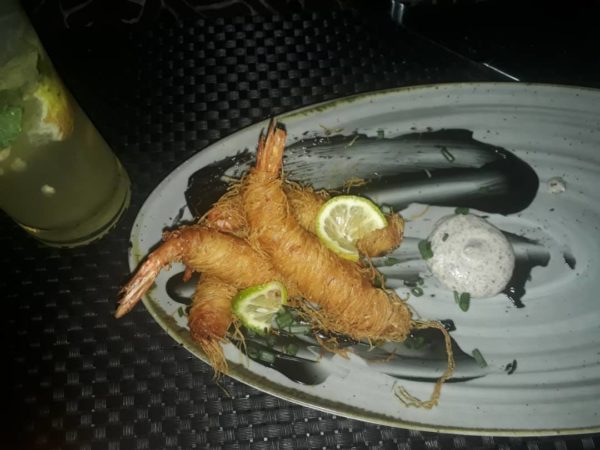 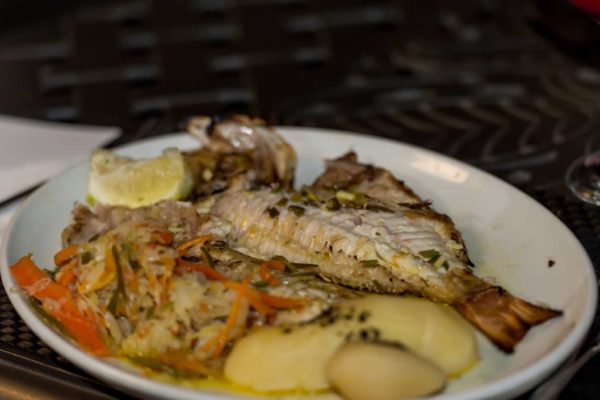 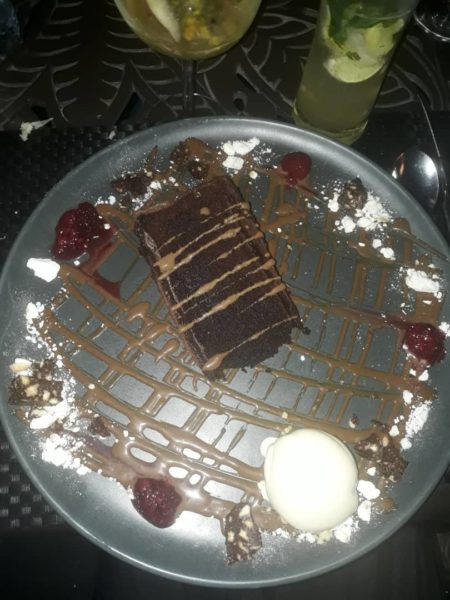 The menu was written in Portuguese and English. However, to make the experience fun, we were asked to try and use the Google translator app to translate the Portuguese texts in the menu. To achieve the task, we had to use the camera function of the app and it actually worked! 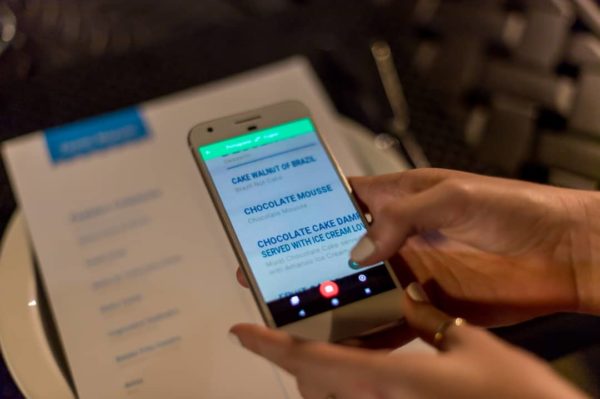 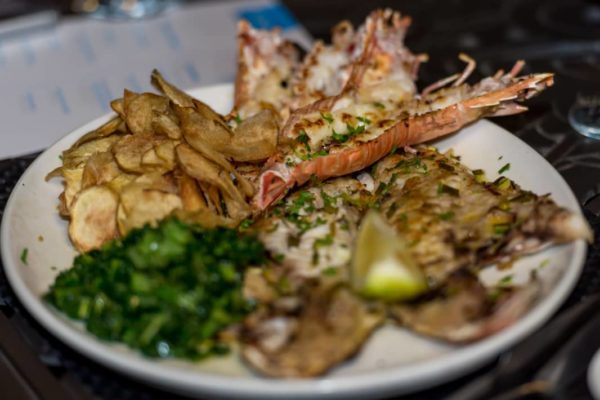 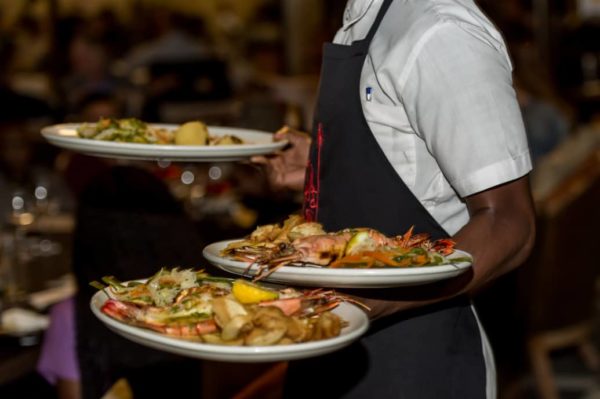 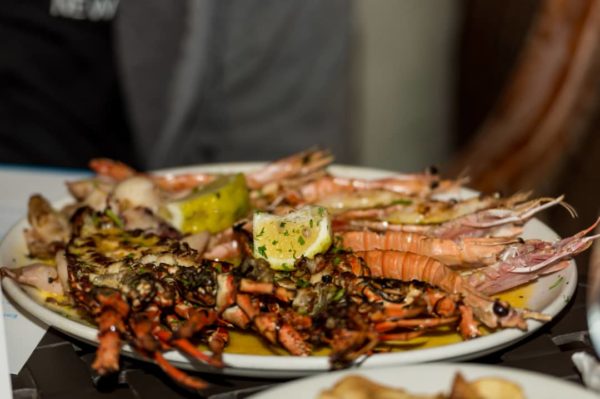 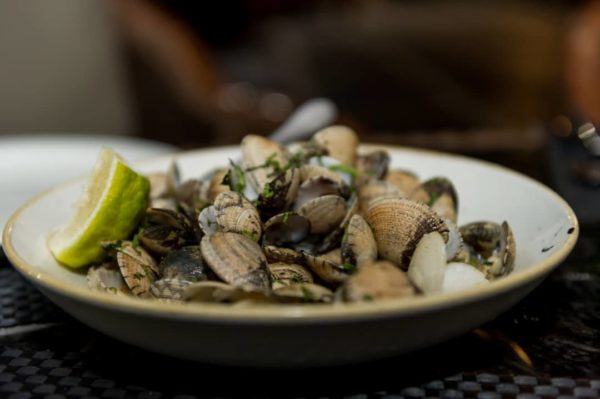 The dinner was quite an exciting event, as it offered us the chance to meet and socialize with the other influencers from Kenya and South Africa.

Do you want to find out what we got up to on the second day of our trip? keep refreshing BellaNaija for more details of my fun trip to Maputo! Special shout out to Google for making this happen.

Remy Ma & Papoose are having a Baby! Watch their Super Cute Announcement Video

Jasmine Howson-Wright: Drowning in the Now