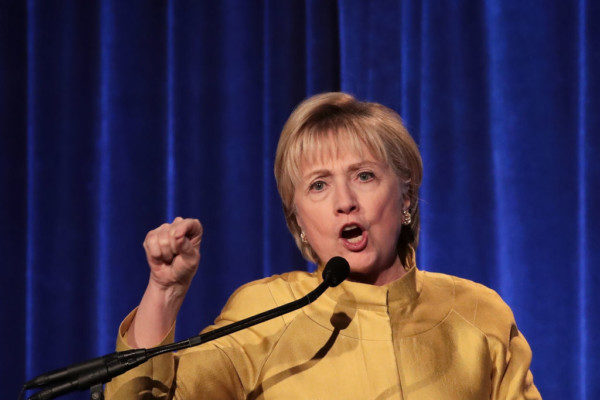 You are a woman who has inspired so many women all over the world. You ran for the highest office in one of the most prosperous countries in the world. My generation would say you are goals on every level. For me, there was something you did that blew my mind which is the focus of my letter, but I will speak about it later. I must say that one of the things I respect about you is the fact that you stood by your husband during what must have been the toughest time for the two of you. I can’t even imagine the pressure and public scrutiny that you would have endured. Why this is profound for me is that my one of a kind husband too stood by me during one of the most difficult times of our life. I faced temptation for three years and fell and we dealt with it privately, but when we published our book, The Richer Woman, we had to face public scrutiny. Thank you for standing by Him. Many women may have shamed you for standing by him but I’ve come to realize since I launched my book that it’s not just men who cheat or go through temptation; many women face temptations and cheat but the thing is we don’t talk about it.

The reason I write this letter is this: the other day, I saw a screen shot of your Twitter profile on Instagram and I was blown away. I was so impressed that your profile started with WIFE, MOTHER, GRANDMOTHER before your other accomplishments. I was so happy when I saw this and planned to talk about how amazing it was on social media. You can imagine my shock when I heard and saw that you had changed it and upon further investigation, I read that you changed it because of an opinion of an activist writer… This may or may not be the case but the point is that you changed it. This time, you listed your career achievements before Wife, mother and grandmother.

Why is this personal to me? Well let me share a part of my story. Due to challenges I faced growing up, I came from a very wealthy home but we went through financial challenges. I decided that I was going to be very wealthy. I did this out of fear. Due to my fear I put my career before my family. My career almost cost me my marriage, family, health etc. But God changed my priorities.

Today, I am still very driven but I am no longer driven by fear but by purpose. I am successful but there is a major mindset shift.

For me, I understand my role in my husband’s life. I’m Christian and my Bible says the reason Woman was created was to be The Man’s helper, so I am aware that the role I play in my husband’s life is pivotal. Bill Clinton would not be who he is today without your support and help. I also realise that the role I play in my kids’ life as their mother is one of the most important roles in my life. I cannot be truly successful if my kids do not reach their potential – and my husband, too.

See, God speaks to me through analogies and when I was writing my book I asked Him what the analogy for a wife is and He said, “Soil”. A seed has so much potential however, no matter how much potential a seed has, it cannot grow to become the plant or tree it was created to be if it doesn’t go into the right soil. The soil provides nutrients and water for the seed. It nurtures it and holds its roots down so it’s able to withstand storms, etc. The man is a seed in this analogy and no matter how much vision or potential he has, he cannot achieve it without the right soil – i.e. his wife. You were clearly good soil to your husband and even when he made a mistake you provided the support he needed. So whether or not he included “husband” on his Twitter profile, He couldn’t have been President without you. Being his wife is a great achievement. If women know how powerful we are we wouldn’t compete with men.

Your daughter Chelsea is doing well and may even become the first female President of America. Without you nurturing her she wouldn’t be the woman she is today. So you see your greatest accomplishments are being a wife to your husband and a mother to your children.

No matter how many awards I win or ceilings I shatter (trust me I’ve won some and will win even more), I cannot be said to be truly successful if I don’t fulfill my role as my husband’s helper by helping him achieve his vision and if my children are not successful.

Some people may say but is this an excuse for men who are lazy or don’t have vision, so let us go back to the analogy of the seed and soil:

Feminism, according to the dictionary, is defined as “the advocacy of women’s rights on the ground of the equality of the sexes.”

I agree with this definition. Contrary to what a lot of people think, feminism was actually God’s idea. However, where the purpose of a thing is not known, abuse is inevitable. The whole point of feminism was for women to understand that they are equal to men. Yes, we are equal in God’s eyes. Women should not be oppressed or taken advantage of. Women should not be paid less because of their sex. Women should not be perceived to be the weaker sex because though we may be perceived to be weaker in physical strength, we are stronger in emotional strength. I dare say that no man can bear the pains of child birth.

In my time in investment banking, I was treated equally as my male colleagues. My value was determined by the value I brought to the table and not my sex.

I believe God is an advocate of the true meaning of feminism because He wants His daughters to know how He sees them. He is not happy that His daughters have been oppressed over the years by tradition and culture. God has a special place for women. Even when you look at the Bible you see strong women like Deborah who was a judge and a prophet, you see Queen Esther. Even in the New Testament, women funded Jesus’ ministry; He was surrounded by successful women.

Now when it comes to the marriage union, we are equal in God’s eyes however, in terms of responsibilities, my Bible says my husband is the head. This is perfectly fine with me. It’s like in a company: employees have different responsibilities. There is a CEO, COO, CFO, etc.

See, the true meaning of feminism has been perverted. It is not about putting men down or saying we are better than them. That’s not the purpose of feminism. Unfortunately, many feminists today put men down and this is not good. Women are becoming like the men that they once complained of.

I was on the plane to Paris for my book tour when I started writing this and I’m on my way back as I complete this letter. My husband is a successful aviation lawyer and he is helping me take care of the home front while I’m away. When I get back I’ll resume my responsibilities. Last year, I travelled to so many countries and he stood in for me. We are a team. We are on the same team. We have our different responsibilities and we help each other and step in for each other.

Feminism is ALSO NOT about looking down, criticising or verbally abusing other women who choose to put their families first. It is about ensuring we are equal and access equal rights.

See, God has a unique purpose for every woman. Some are meant to be Presidents, some chief executives, some professionals, some stay-home wives, some full-time mothers. A woman should have the right to choose what she wants or who she wants to be and not be forced to be someone-else. That’s what true feminism is about. Feminism has been perverted and it is now at another extreme where the women who choose a certain path for their lives are shamed and abused by other women. Every woman – regardless of what she wants to be or chooses to be (the key word is choose not forced) – is valued and valuable to society.

As I conclude this letter I would like to let you know that your initial Twitter profile spoke to and for millions of women who society and, in fact, other women, have condemned for being true to who they choose to be. I’m not talking about women who are forced to stay at home or not allowed to work, but to women who choose to put their family first – regardless of whether they are top corporate- or business executives or a stay-home mothers or wives.

Feminism is about ensuring that women have equal rights and this covers all women – even stay home mums.

Whilst I wish this letter will make you change your twitter profile again, even if it doesn’t, what I hope this letter does is to encourage women all over the world to be true to who God has called them to be. We are powerful and we must not abuse our power but use it for what it was given to us for.

Thank you, Hilary Clinton, for being a source of inspiration to so many women and girls around the world and giving us hope that our dreams are valid – whether it is to be a wife, mother or president of a country. You have inspired this young woman from Lagos, Nigeria.

From a Hobby to Profession! Find Out How Aham Ibeleme Became One of Nigeria’s Most Sought After Celebrity Portrait Photographers

#PVCitizen: Do your Part, Get your PVC