#LiterallyWhatsHot: "Hang No Clothes" Will Show You What it Means to be a Noble Nigerian Police Officer

DonateNG's Medical Support Campaign is Changing the Lives of Nigerians 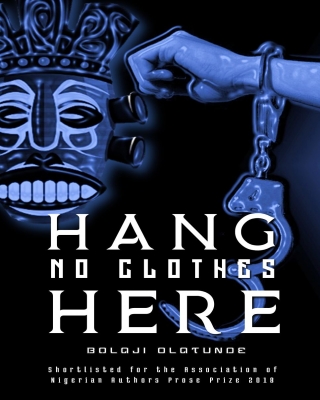 Hang No Clothes Here, Bolaji Olatunde’s second novel, was shortlisted for the Association of Nigerian Authors Prose award earlier this year. After reading it, I can see why. The book is set in two major cities in Nigeria – Abuja and Lagos. It follows John Braimoh, who narrates the story through his own voice and examines the unfolding events with a sense of shock. Really, it’s almost like he can’t believe the things that are happening to him or around him. Meanwhile, readers are rolling their eyes with the obviousness of the situation.

John is an assistant superintendent who is asked by his colleagues, including his closest friend, Dennis Omoruyi, to cover up the killings of five suspects. Despite being threatened not to testify falsely, he still goes ahead, which causes the death of his 12-year-old son. But things get worse and he seems to get more involved in the ongoing drama after he decides to act as a spy to protect his family and make some money on the side.

I found it interesting how the author took us from the grimy world of being a Nigerian police officer to the complexities of the discreet world of a drug trade. The switch was slow and transitioned while showing John’s feelings about the things happening around him. He might not have always played a willing part in events, but he nevertheless took responsibility for his role.

I will say, though, that his way of dealing with things was weird; like when his son was killed and he decided to spend the night with a prostitute, rather than console his wife. It struck me as a really weird way to get over the loss of a child. Then when John talked to his best friend Dennis who went off talking about how useless women were, I wondered why John didn’t hit him on the head with a chair, and was only “irritated.” But it eventually became clear that John’s patience with his best friend was indeed unwavering, even if it meant lying to cover up Dennis’ wrongdoing.

Although I’m not sure what to make of their friendship, at some point it seemed very toxic and not so mutual, but I had to give John the credit of being a good friend. Something that I found annoying was the way the author explained even the most basic Nigerian terms. Honestly, it became very unnecessary at some point and tedious to get through making the book even longer.

My final verdict? It was actually a really good book even though the lead character, John Braimoh, wasn’t particularly lovable or relateable for that matter. Still, the author had us looking out for him and hoping he’d get through everything alive too. I also learned a few new interesting things about Yoruba mythology too, so that was great. But, hey, don’t just take my word for it, get it on OkadaBooks and find out for yourself.

Reviewed by Diamond-Hope. She is a writer and in her spare time dedicates herself to watching as much as she can on Netflix. She might still be an aspiring filmmaker but she loves to read and review books. Catch up with her on Twitter and Medium

The Daily Vulnerable by Chude Jideonwo: You are not your Emotions Only