BN Prose: She Won't Be There by Feyisayo Anjorin 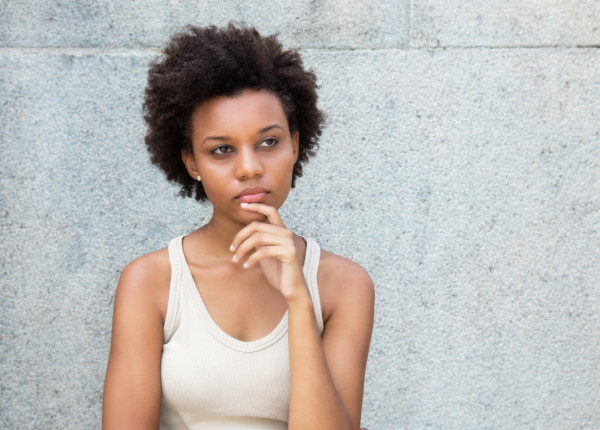 I did not believe it when I heard that you had a serious thing for Sandra. I was stunned – even though I had to pretend it was nothing to me because of the people around – when I got to know that you asked her to marry you.

Tunji, I know that I may not be the most desirable woman in your circle, but I am far more desirable than that sneaky lying witch, and you could change the “w” in witch to “b” and Sandra would still fit that ugly picture perfectly!

I was in a corner in the eatery on the 11th of August when you had your first date. I had this blue NY baseball cap on, with an oversized white shirt; you would have seen me if you had turned to look behind you, but there you were, smiling for over thirty minutes like a shy teenage girl, just because of a girl who is probably older than you.

I got to know about the date when I saw you beside the flowers by the parking lot. You didn’t see me but I saw you; you were speaking to someone on the phone. I was in my car, my headphones in place as if I had been carried to new places by good music, but I heard every word and I knew you were getting good responses from the other side. I knew from the smiles and the body language. I heard the time and place, so I made my plans and followed you to the eatery.

I didn’t know that date could birth something worth worrying about. I thought you were just having lunch. But this morning, as I was getting water from the dispenser in the passage close to the reception, I heard the talk about you two planning a wedding!

I don’t blame you. It is the veil of ignorance that is covering your face, which I hope will be gone after you have read this.

See, Sandra is a bad girl; she is not the kind of girl for a man like you. This is not about me, this is not desperation, this is just a friend looking out for a friend.

I remember when you started working here five years ago. You were stick-thin like a hungry pastor that has been fasting persistently, you had this afro that made you look like those stick men children draw in their notebooks for practice, you were really pitiful. From that time I had been smiling at you. I would come to your desk once in a while to ask how you were doing, I would buy you lunch, and sometimes give you a ride home.

At that time Sandra was at the desk next to yours, but it would seem as if you were invisible to her. I know this because one day I came to your desk and didn’t find you, so I asked her where you were and she said, “Se Skele?” Is it Skele?

That was the name she called you with a sneer. Skele. Skeleton.

When your late mother came to the office – one day a few years ago – to look for you during break time, that day you went for an official function with the boss and your mum came smelling of sweat and locust bean, Sandra was the one who shushed her off as she was asking where you could be found.

Sandra didn’t see the future as I did; she didn’t see your prospects, your bright future, the possibilities, your potentials. I saw you as a promising young man. I knew you would never settle for less. I didn’t have to wait for you to write all the professional exams that have given you the present advantages before I gave you the respect you deserved.

I’ll let you in on a secret. I have never told anyone about this, so please take it like a man. There was a day I had to work late into the night, so I was at the office till a quarter past eight. When I was done with what I was doing I decided to go to the boss’ office to place some documents in the filing cabinet. I had thought the boss had gone home so I didn’t knock the door before I entered. I saw Sandra on the boss’ lap and the boss’ head was somewhere on her chest as if she was breastfeeding him. You need to see the way she jumped when I opened the door. You need to see how quickly she started buttoning up her shirt.

I told them I was very sorry, but I could see the shame in Sandra’s eyes, even though the boss had the look of someone who wouldn’t care if the whole office saw him like that.

I even heard that Sandra is a witch. She told our former boss – the one who was sacked before this one you know came on board – that she is a white witch; she does not do wicked stuff with her witchcraft although she wouldn’t want anyone to dare her.

I hope you know that our former boss, who she was dating when she uttered those threatening words, dared her, and the man is now selling cement in a 3 by 3 iron container on Oba-Ile Road. A former branch manager in our company is now living in Ita Oniyan. That is how bad things got for him. That is the woman you want to take as your wife.

I know this could frighten you and make you wonder if you should risk Sandra’s anger by telling her it’s over. Tunji, you don’t have to be afraid. If you change your mind I will take you to a prophet that the Lord has been using to finish her kind. It would take a few days of fasting and praying, even though you could hire a prophet to do the whole thing on your behalf. Sandra may be a witch – white or black, witches are witches – but she is not God. Cases like this are a small thing for the God of Joseph Ayodele Babalola.

It is all rosy for you today, yet no one knows tomorrow. You need a woman who will be there at all times, whether you have a fat bank account or a thin one, whether you are sharing a table with Dangote and Otedola or selling noodles on roadside tables; a woman who can cook, not one whose voice would silence a boardroom full of men with fingernails painted red.

The future I see with the two of you is very ugly; you don’t want to be that man. I know you have printed invitation cards and have traveled here and there to get to know each other’s family. Thing is: what is the use of speed on the road to hell?

When the bad times come, when the storm shakes you and shakes the home, when this so-called love has been stripped of giddy feelings and ice cream and trips to the cinema and candlelit dinners and red roses and all sorts of fun and pleasure, when the time comes to face the hard facts of life’s challenges, she won’t be there.

Believe me, she won’t be there!

Akpo Uyeh: 14 Types of People You Find on a WhatsApp Group Chat