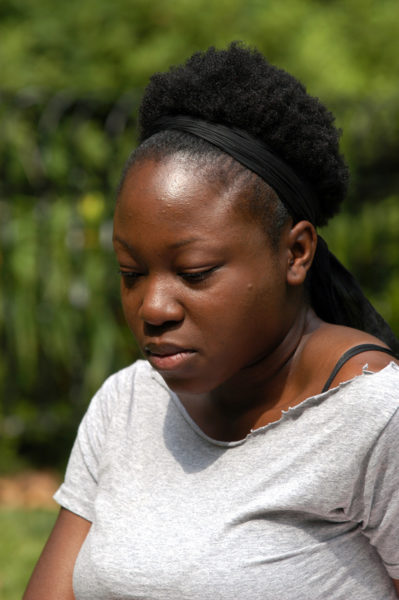 It is a very hot day, the kind of day that would make my friends and I jokingly declare that the gates of hell have been left open. The heat is getting unbearable, so Iroll down the windows a bit. This gives me a view of a cattle herder and his flock. He leads them towards the opposite direction, flogging the ones that resist his control with a crooked cane. For a minute or two, I think the cows and I share something in common: reluctance. They do not want to yield to the authority of the herdsman and I do not want to be on this journey. I cringe as the herder hits one of his cows again. What I feel for these poor animals is pity. They refuse to go on a path that another has chosen for them and they are punished. I wonder what will happen if I get down from this bus and defiantly say I am not going anymore. Would I be flogged with a crooked cane too?

As I am deeply immersed in my ocean of thoughts, I feel a hard palm rub my behind. It is my husband. He pulls me closer and rests his head above mine. We are on a journey to his hometown as newly-weds and almost half of the other passengers in the bus are his family members who had accompanied him to whisk me away to a marriage I only got to know about three weeks ago.

I clearly remember that evening. It was chilly. One of those evenings when my father and brothers would sit outside beside the fire measuring their efforts on our farm, talking politics or sometimes, entertaining visitors whose partner’s incessant nagging had chased them away from the comfort of their homes. Such gatherings never required my presence, so evenings like that, I would stay in with my mother and allow her to drown me in a sea of talks of other people in our community. I do not know how but my mother always has her mouth filled with stories of different people and their households. Her tales are never of utmost importance though since they usually hover around petty issues like steamy quarrels between a couple or a furious exchange of words between neighbors. This particular evening, I watched my mother stir a pot of boiling vegetable soup as she told me about my husband, Nnamdibuike.

According to her, he works as a clerk in a bookshop in a town not too close to us, he’s looking forward to settling down and starting a family. A mutual family friend had spread the word and seemingly, my parents thought they had the right candidate under their roof.

“His people say he is a good man, Ngozi. I’m very sure he will take good care of you and my grandchildren,” she said. It was right there I began to plead my case.

“I am not ready.” I pleaded. “I will marry the man of my choice when it is time Mama. Please.”

She called my father in and at that point, I knew I had lost the battle. My throat was full of words that could have earned me a good beating that night but I knew better, so I surrendered. A few weeks later, my body was adorned with chalk and beads and with a cup of palm wine in my hands, I searched for this husband I do not know. My praises were sung and music that narrates the joy of a new bride played in the background. The food, drinks, and gifts were surplus. Shortly after, it was a done deal and here I am, on a journey to fill shoes that will never fit.

The driver parks the bus for some passengers to empty their urinary tracts. One of them is Chinyere, my sister-in-law. She’s a university graduate married to Nnamdibuike’s elder brother, a clerk too. She is tall and shapely, with skin that shines and a tiny gap between her incisors. I watch as her children tug at her dress while she struggles to make her way back into the bus.

She smiles at me. I return the gesture.

She is actually smiling now and singing to her children. I think she looks satisfied but not happy.

I try to imagine how different her life would be if she had put her university degree into good use and not settle to marry a man who makes sounds while he chews. Maybe she would have two children who love to tug at her dress and listen to her sing to them but definitely not in a rickety bus like this, sandwiched between elders whose utmost priority was whisking an 18-year-old from the care of her parents. Or maybe she would have turned out to be one of those women my father spoke about; “those ones who have forgotten where they come from”. Those who stayed in the big city, owned saloon cars and offices, wore jingly earrings, bold lipsticks, loved cigarettes and mostly unmarried. I liked those women more. On hot days like this, I would lay on the cool floor in my father’s house with only my wrapper thrown across my chest, imagining myself wearing a wig, a bold lipstick – perhaps a very dark shade of purple – and jingly earrings.

A smile escapes my lips and I look up to find Chinyere staring at me. I feel so bad for her. She can be so much more. Then it hits me… soon enough, I will be just like her, if not worse. I really do not want to be a Chinyere to another Ngozi. It is like a whirlwind of thoughts in my head, a whirlwind of swift decisions. I quickly decide that I want to go home now. I will further my education, perhaps get a diploma or a degree. I will then get a job in the big city and send money home so my father can return the kegs of palm oil and goats he received from Nnamdibuike’s family. I will wear various shades of lipstick, drive in saloon cars and, as the case may be, have a home with someone I love. I will return home and start all over.

“Eh Ngo. What is it?” A thin line of spit trickled down the side of his mouth. He had been sleeping.

His mouth drops in shock and his eyes widen.

I ignore the look on his face and continue talking. “I do not want to marry you again.”

He grabs my arms and whispers in my ear. “I know what this is. It is fear. Don’t worry, you will be fine. Chinyere will help you settle in.”

I look up at Chinyere. Nnamdibuike’s brother is snoring loudly with his hand tightly around her waist. She looks embarrassed and really uncomfortable. She needs help. How is she going to help me when she can not help herself?

“No. I don’t need help.” I insist. “I want to go home, my father shall return your gifts.”

He looks down at his worn-out wristwatch and says, “But we have only been on this journey for 46 minutes. Don’t worry Ngozi, I will help you. We are in this together.”

I say nothing. With my bag in hand, I walk steadily towards the driver’s corner. I am going home.

Gloreea is a budding beauty journalist and also, a graduate of the Nigerian Institute Of Journalism. She can be reached via [email protected]