We're Celebrating the Nigerian Youth With our #BellaNaijaWCW Feature this Week! 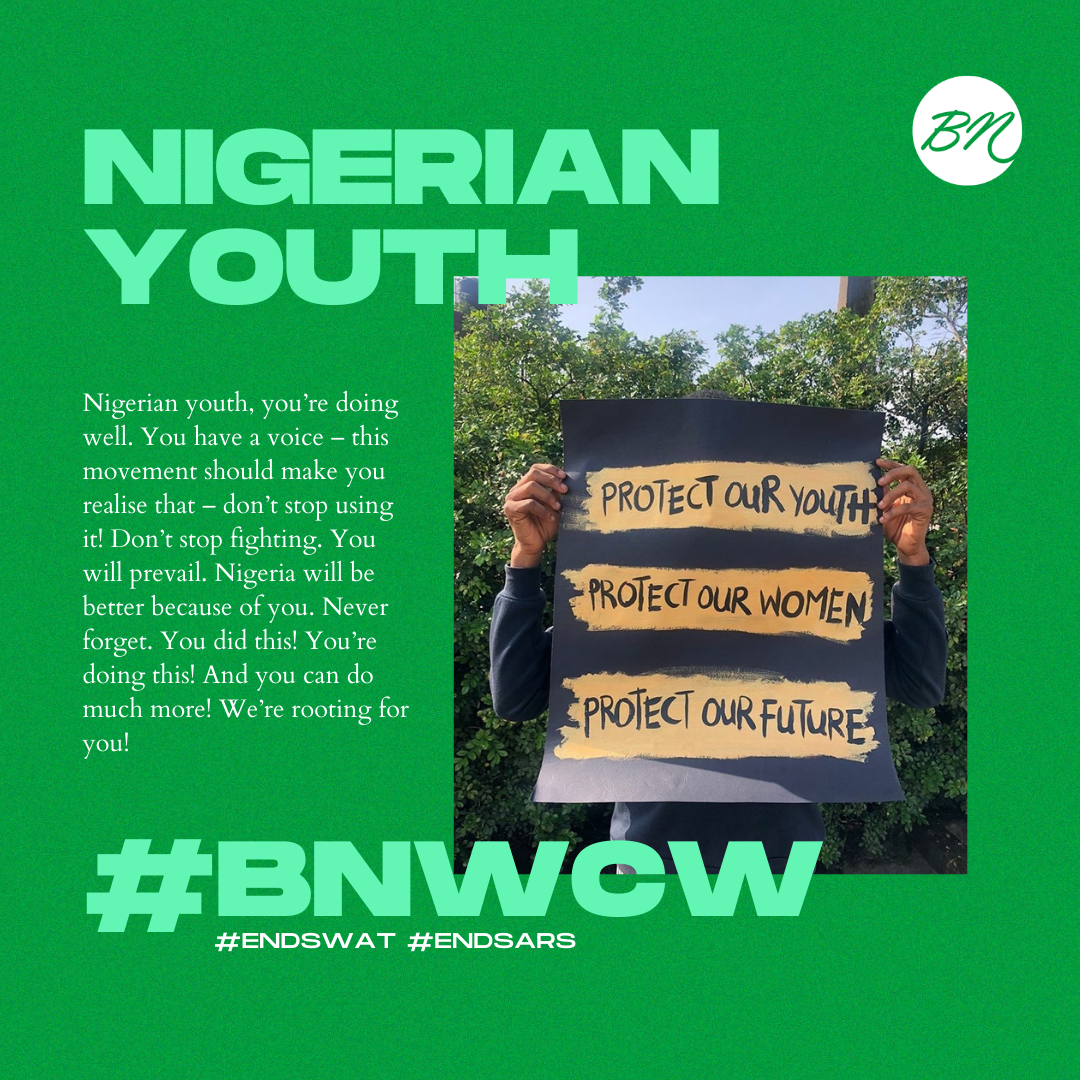 As earlier stated, our #BellaNaijaWCW and #BellaNaijaMCM features this week celebrate the Nigerian youth, the men and women who for seven days in a row, having taken to the streets to demand that the government puts an end to police brutality, especially from the hands of officers of the Special Anti-Robbery Squad (SARS) who have been assaulting, extorting and murdering Nigerians. But now, the Nigerian youth have risen up and we’re celebrating them for that!

The magnanimity of the protests all over the world says one thing: SARS/police brutality is as real as real is, and something has to be done. On Sunday, the Inspector General of Police in Nigeria, Ibrahim Adamu, announced that SARS has been dissolved, but this is not the first time we’re hearing something like this. They’ve been “reorganised” (2017), “overhauled” (2018), “disbanded” (2019) and now, they’ve been dissolved. Nigerian youth have said they don’t want to stop protesting, because after the last three times, the officers still got back in the streets doing the same thing they’re known for.

On Tuesday, the IGP announced that all officers of the dissolved SARS are to report to the Force Headquarters for debriefing, psychological and medical examination, adding that a new unit – Special Weapons and Tactics – will fill the gap created by the dissolution of SARS. Youth do not want that. “We do not want SARS with a new name” is the consensus.

This is why we are celebrating Nigerian youth:

In Abuja, protesters were teargassed and fired with water cannons, some were beaten, others jumped from moving vehicles. Cars were rammed into by police trucks, others had their tyres knifed. Some people ran away for so long, they got lost. Guess what they did. They regrouped AND CAME BACK! Nigerian youth CAME BACK to make their voices heard. On Tuesday, they wear assaulted by the military in front of the National Assembly. On Wednesday, thugs came at them, destroyed their cars and attacked them with sticks, knives and cutlasses. They repelled the thugs and even handed the ones apprehended to law enforcement while transport the injured ones to the hospital – a reminder that this is a peaceful protest.

In Lagos, protesters have been sleeping in the State’s seat of power, Alausa, for days! The Lekki-Epe Expressway toll gate has been on lockdown for three days.

Millions of Naira have been raised to support protests organisers across the country. Apart from other individual contributions that didn’t make it to social media.

Protests have been organised in the US, UK, Canada, France, Germany, Ireland, basically everywhere!

Hundreds of young lawyers have been working pro bono to secure the release of detained protesters.

Unfortunately, a number of youths have been killed in Ogbomosho, Oyo State, but the youth are still ready to make their voices heard, for the people who have passed in this struggle.

All over the country, in Port Harcour, Owerri, Onitsha, Ughelli, Kano, Calabar, everywhere, youths are raising their voices to demand a better police force!

And guess what these protesters do after every demonstration – they clean up! A responsible generation.

Again we’ll say: Nigerian youth, you’re doing well. You have a voice – this movement should make you realise that – don’t stop using it! Don’t stop fighting. You will prevail. Nigeria will be better because of you. Never forget. You did this! You’re doing this! And you can do much more! We’re rooting for you!