Long ago, I stumbled upon Tariq Tahir‘s A Tale of Two Cities on The Sun. His essay was accompanied by photographs that showed the stark split of extreme poverty and wealth. In each photo, riches and poverty sat by each other, divided by walls, tarred roads or just green grasses.

Two pictures caught my attention the most. 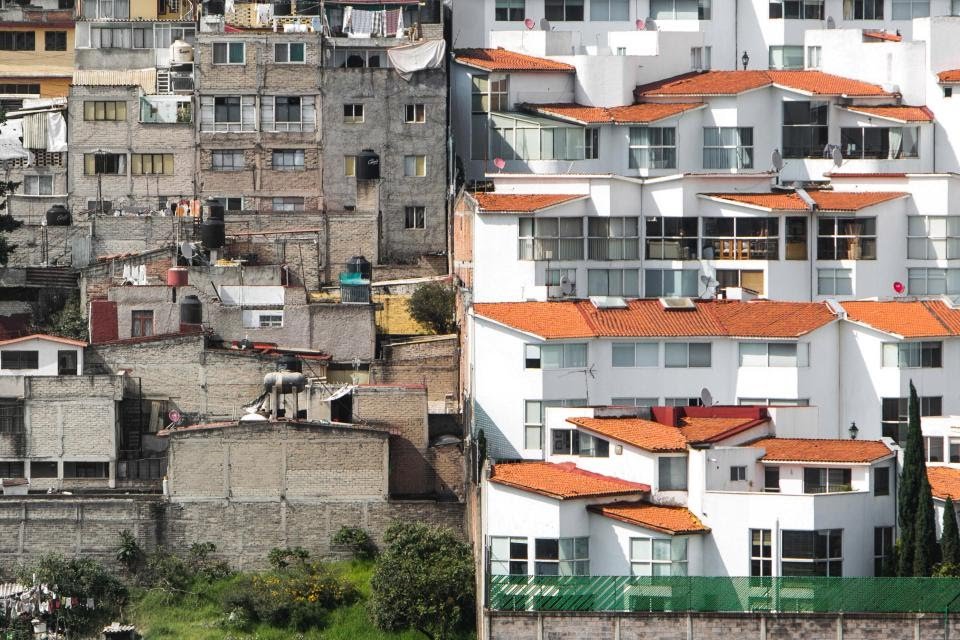 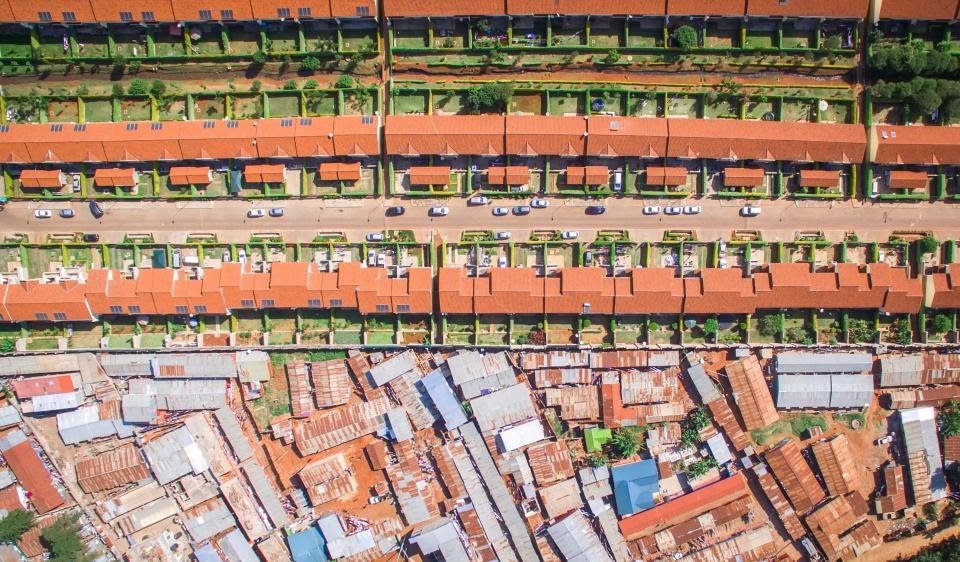 In the first photo, I imagined those who live in this slum, in the rooms directly beside this white house, peeping through their windows and seeing the quality of life the rich people live. I imagined the poor kids watching the rich ones play, speak, learn, aching to live their lives. In the second photo, I also imagined that the people living in this slum climbing the fence regularly, want and longing etched on their faces.

Sometimes, this longing might build into resentment, bitterness that the rich have what they so crave for and may never get. I also imagined what would happen if, for a split second, those walls were brought down, security all gone, and those who live in the slum had the opportunity to take what belonged to the rich.

We have something similar in Nigeria – highbrow areas surrounded by slums, divided by flimsy walls. In 2016, Urbane Aries took a photo that showed the contrast between wealth and poverty in Lagos, coexisting side by side. 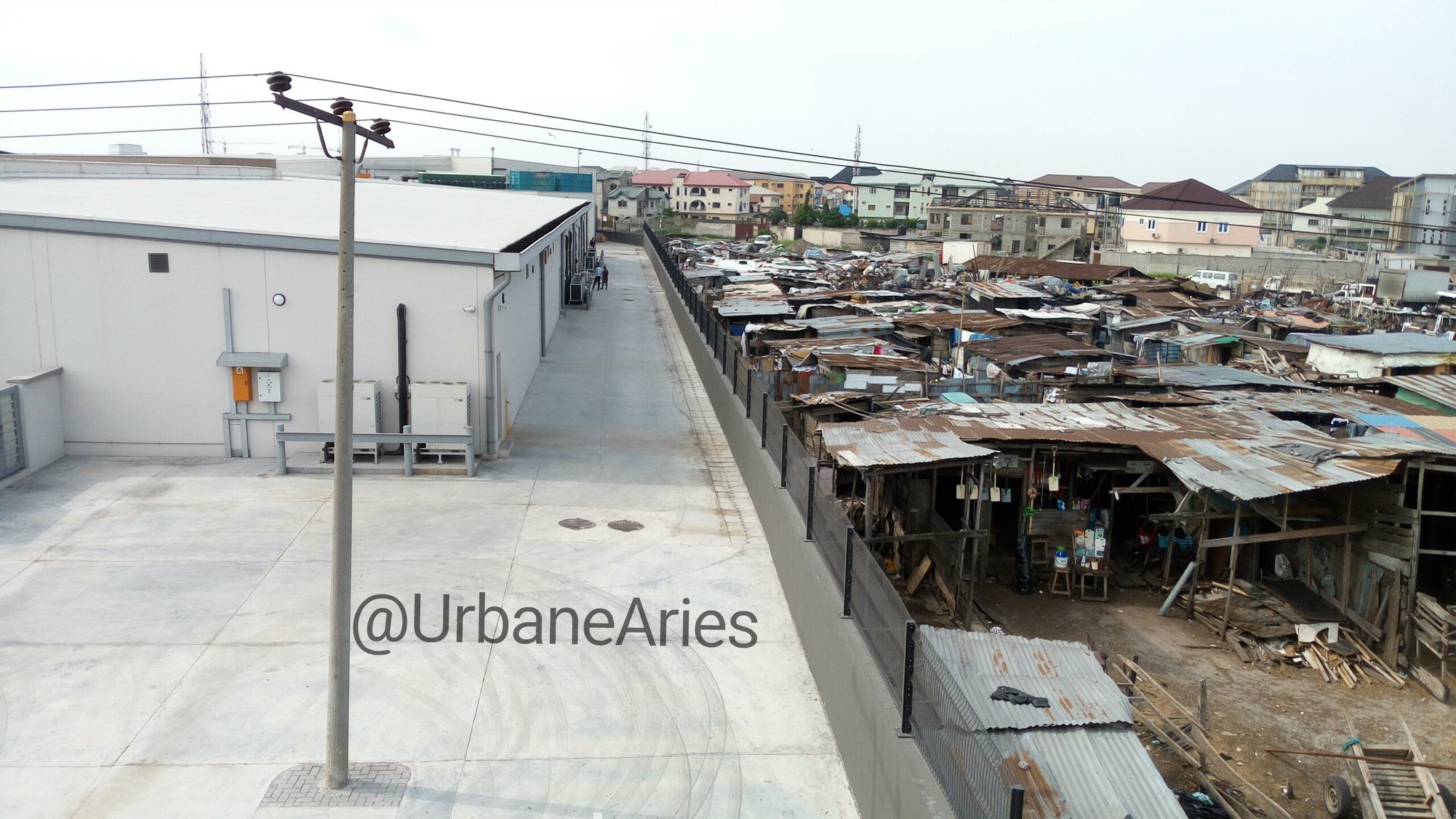 105 million Nigerians are said to be living in extreme poverty. This means that these people live below $1.90 (₦855) daily. According to 2009 statistics, 92.1% of Nigerians were estimated to be living below $5 daily. As of 2018, 152 million Nigerians were living under $2 daily. With a population of 206 million, this recent report shows that over half of Nigeria’s population live in extreme poverty.

We are an extremely poor country. Little wonder, then, that when warehouses filled with palliatives were ‘discovered’, when malls and shops were ‘available’ to be broken into, when the opportunity to cart away goods presented itself, there were so many people willing to carry out this act.

While discussing with my sister, she said, “At the end of all this, it is the Nigerian middle class that will suffer the most. The poor are angry and bitter with life, they want what the rich have, but they cannot get it because the rich have enough money to provide security for themselves. Las las, they will just pick one or two clothes and leave the country until the whole ‘riot’ dies down. The middle class are similar to the rich; they can afford to feed, wear good clothes, drive cars – even if it is an old model, but they are not wealthy enough to have armed policemen carrying their bags and trailing them like little chicks. Still, the poor envy them. If this ‘wall’ between the middle class and those who live in extreme poverty cracks or breaks, the poor will eat them up.”

We saw this play out during the curfew in Lagos. Many of the shops and malls that were looted belonged to average Nigerians who hustled to build them. They had probably saved up money for years and deprived themselves of so many things just to set up that business. I found it amusing when someone on Twitter said, “But we’re also fighting for them. It’s not fair that they’re destroying our own businesses too.” Truth is, these ‘looters’ do not care about the protests. They saw an opportunity to have what the rich have, what they have long admired and craved for, and they grabbed that opportunity. They also have nothing to lose.

While the looting was going on, Joey Akan was giving us very hilarious updates on Twitter. On one tweet, he wrote, “While they were stealing from Circle Mall yesterday, I saw the joy on their faces. Someone stole champagne, popped it while running, was drinking the bubbly from the bottle, and screaming “Omo, ma me dey drink champagne so.” On another tweet, he wrote, “Another person stole synthetic flowers and vases. Asked why he chose the flowers of all the things to steal, and he asked me, ‘Flower dey your own parlour so?’ I locked up. He was right. Flower no dey my parlour.”

On one hand, it is hunger – like those people who hustled to cart away bags of rice and cartons of indomie from warehouses. On the other hand, it is the want for good things. Those things you see the rich have every day, you long for but you know you might never get. Those things that make you pass by the gate of that big man and wish you were his son or daughter. Things like flowers and champagne. In his lifetime, he’ll be able to say, “I don drink champagne before o.” It may look stupid to you who doesn’t see champagne as a big deal, but this is the way life is. This is the way Nigeria is wired. This country beats poor people, over and over again, until the most basic things like flowers become luxuries, until they become hopeless, until resentment and bitterness for the rich fill their hearts.

We can all pretend that the looting and thievery were not caused by poverty by describing the looters as “thugs” and “hoodlums,” or we can accept that these “hoodlums” are Nigerians like you and me who do not have an enabling environment to flourish. Looting flowers, champagne, and plasma TV is the closest they have come to smelling or tasting wealth and they will do it again if the opportunity presents itself.

Lagos is a huge slum that pretends to be a megacity, like shit covered up with roses. A lot of mansions are surrounded by slums. Like what happened in Takwa Bay, we are building a megacity at the detriment of the poor people – the locals – and we are erecting walls to segregate the rich from the poor. But the events of last week have shown us just how easily these walls can be cracked and broken down, and how prone we are to destruction and vandalism.

In Nigeria, we have to start making serious moves to bridge the gap between the rich and the poor, else we will continue to have situations where once there is a little crack in the wall or a little lapse in security, the middle class will not just feel the brunt of it all, but they will also lose their means of livelihood and be plunged into poverty.

Poor people have basic rights that shouldn’t be tied to how much they make. Things like good roads, electricity, basic healthcare, security, and food are the rights of every citizen – irrespective of your status. This is not the time for Tradermoni, keke napep or 20k empowerment schemes. This is the time for building a country where poor people have hope. Where they can eat, at least, one good meal a day. Where their hard work will pay off, perhaps not now, but eventually. Where they do not have to peep through their windows or climb fences, just to have a glimpse of the good life.

Poverty, in Nigeria, is a ticking time bomb, and this level of poverty is dangerous. The destruction of properties in Lagos will be little compared to what’s to come if we don’t lift people out of poverty. Let’s break this wall between the rich and the poor and instead build a bridge.

Voting is Great, but Building a System of Accountability is Also Necessary

Tari Taylaur: We Can Self-Regulate Social Media by Being Mindful of What We Post Online