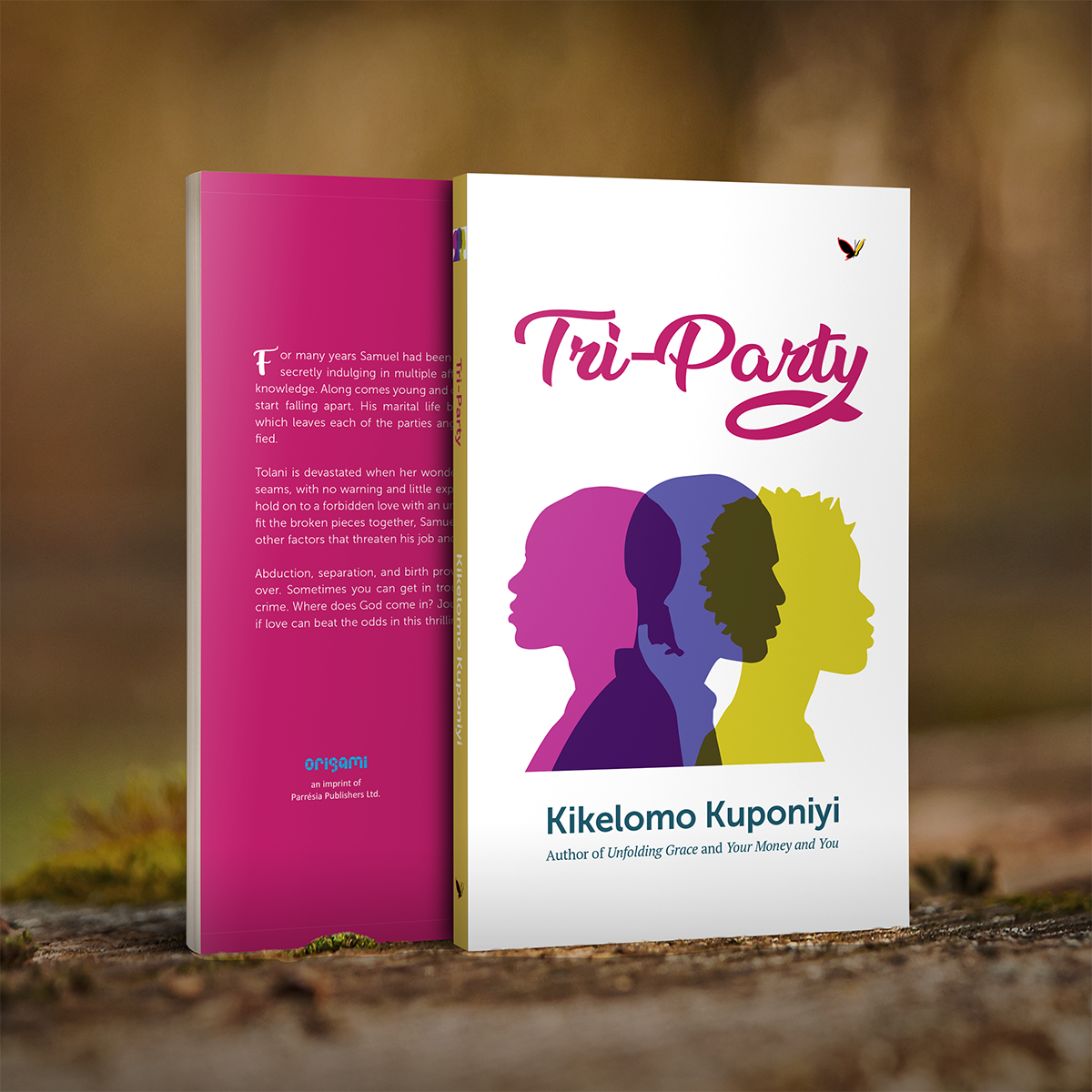 Two’s company, three’s a crowd; usually, this is said when couples need their alone time, and the third wheel has to remove herself or himself. When the third wheel becomes a thorn in the union, then we have a full-fledged party of three attendees – a tri-party. This is the reality of Samuel and Tolani, a couple who has been married for almost two decades. Outwardly, they make us swoon at their couple goals synergy, but their marriage began heading downhill from the moment Samuel decided to let the wrong third-party in.

Immediately I picked up this book to read, I knew that trouble would brew in the meanest way possible and I wasn’t disappointed. The drastic turn the plot took is unexpected and of course the main character, Samuel is one too familiar. Samuel, a lecturer and a master of ceremony, is young, rich and versatile and going by Lagos standards, a big boy. Samuel loves his university teaching job but we all know that being a lecturer alone cannot earn you the title of a Lagos big boy and so he anchors ceremony on the side, which is what gets him the real cash. This means that work, which most times involves traveling, is favoured over family bonding time, and the opportunities to have flings open up. Our protagonist embraces this with open arms.  The mind-boggling thing is how Samuel, who from the first page you’d think can do no wrong, morphed into a life-sized mess.

If you’ve read Unfolding Grace by the same author and the plot caught you by surprise, then you should read Tri-Party. It will most definitely knock the wind out of your sails. Kikelomo Kuponiyi really did a number on this one. A few pages in, I was already immersed in the chaos that is Samuel’s life and sadly, innocent Tolani suffers through it as well. Tolani does not deserve the things Samuel puts her through in this book. I mean, no woman deserves a cheating husband. She is just about her debt collecting business as a banker and taking care of her family before Samuel drags her into the hot mess that is his extra-marital affairs. One sad reality among many that this story raises is how the society blames the woman for her husband’s infidelity. She is profiled mercilessly and made to carry the weight of his extra-marital affairs. You hear things like; oh, she is probably not good in bed, she no longer excites him, she probably doesn’t clean up well, she doesn’t feed him well, she is now overweight, she doesn’t make time for him, she is married to her career, and the list goes on and on just to wash these men clean of their dastardly acts.

Tolani cooks, cleans, she is great in bed and she tidies up real nicely. This goes to say that men do not cheat because of these reasons’ society give them. I wouldn’t claim to know what goes on in the mind of most men when they decide to go sowing their wild oats where it doesn’t belong, but from our main guy, Samuel, it is pretty much because he feels it’s no big deal and he can get away with it. And I think another crucial reason Samuel lets in a third party is because the most important third party in their union is absent – God. In Christendom, the union between man and wife has God as the head, the one that anchors the boat and the one to whom the man is responsible. Both Samuel and Tolani have strayed far from His presence and so their union is adrift on the sea of life with the anchor missing and the captain AWOL. It creates a crack in their union and while they sleep, the enemy comes like a thief in the night to steal their joy.

One of the things that makes this book a gem is that Tolani’s side of the story is not rushed. Most times we jump to the end quickly where the wife has forgiven the husband and they live happily ever after. Kuponiyi meticulously takes us through the motion, showing us that forgiveness involves taking small but huge steps. It is a long, uneasy journey. She will have to keep forgiving him daily and keep forgetting as well. I also like how plausible this story is with the way both partners decided to work on their marriage. No matter how minute the issue is, if one partner is not ready to do the work, then the union is over.

Everything about this book reads perfection. From the plot to the dialogue and the characterization, you’d find very little amiss with the storytelling. If you are looking for drama and suspense with a blend of crazy characters this book is for you. If you have been weighed down by the burden society placed on women with cheating partners, this book will let down your burden gently. If you are looking to reconnect with God either in your personal life or in your relationship, this book is the ideal book to pick up. If you need a Christian fiction to curl up to on a Sunday afternoon, this is the one. More importantly, if you need a book that delves into the phases of forgiveness, just get a copy of Tri-Party.

Building a System Where Employees are Treated Better