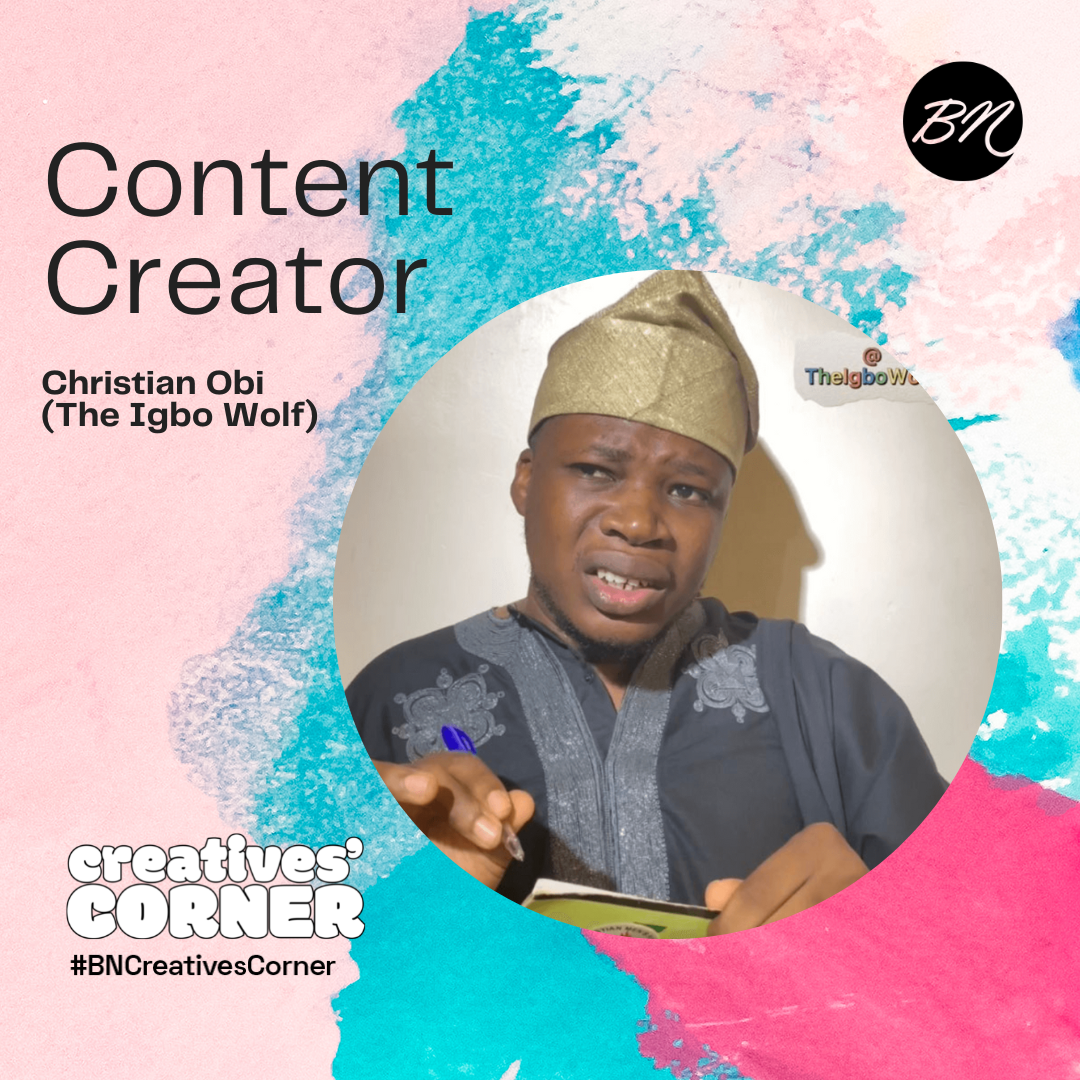 As a child, Christian Obi‘s best place was in his head. It was there he steered his thoughts carefully and delicately until they produced consumable visuals and words. Magic happened in his head.

Christian comes from a family of 6: 4 boys, a mother, and a late father. Before his younger brother showed up, he, for a very brief moment, enjoyed being the last born. But it was so short-lived that he had to seek affection elsewhere.

I know my younger brother is going to cuss me out when he reads this interview, but I had the classic middle child syndrome. I wasn’t a baby for long before my younger brother showed up and attention was moved to the new baby of the house. So my best place was always in my head. That was where everything happened. That was where I had to run to. I feel like my first show of affection came when I started writing. I still remember having to write my stories at night.

At first, I didn’t think much of what was going on, but I later realized that also did affect my whole personality and who I eventually became. 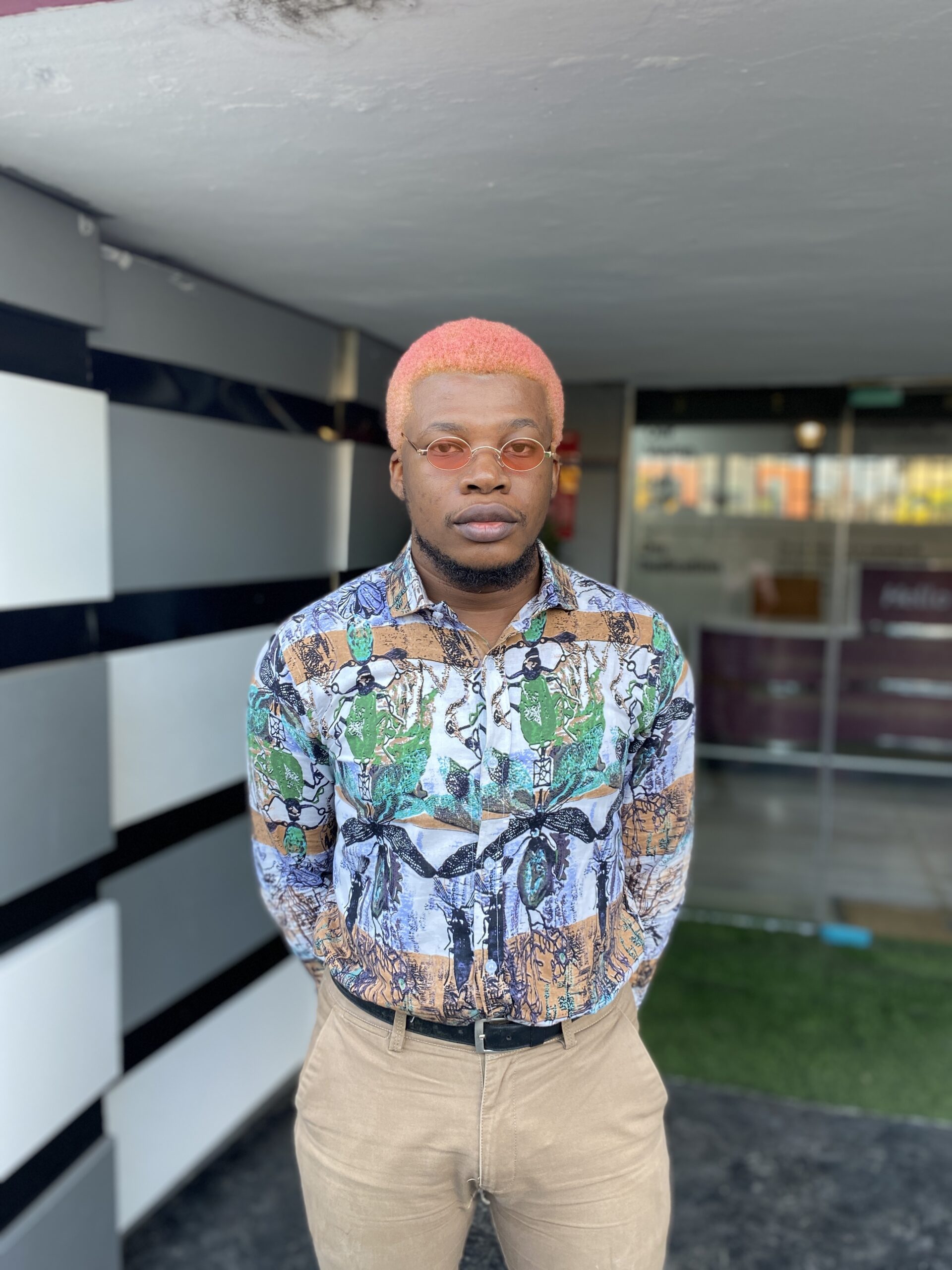 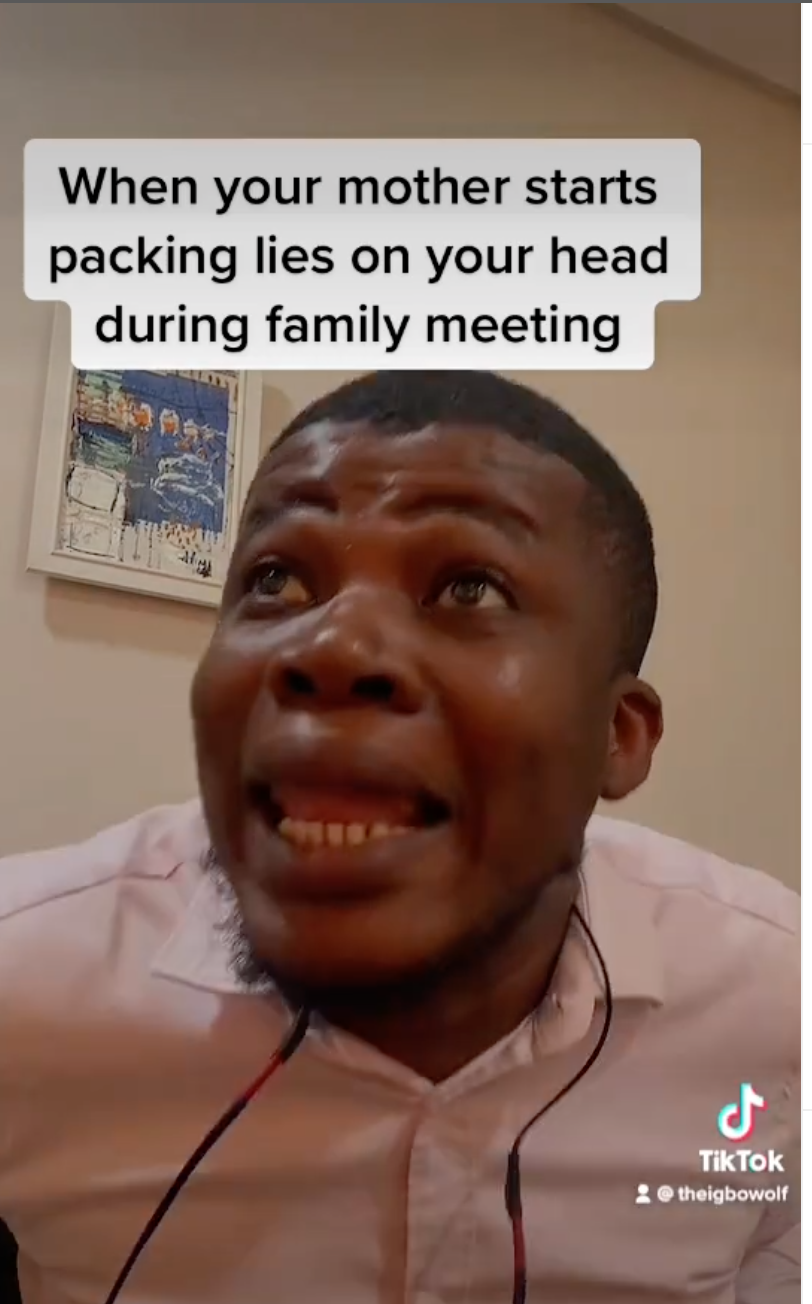 Who Christain eventually became is The Igbo Wolf, a social media sensation who fills our timelines and lungs with laughter. The Igbo Wolf is Professor Uwa – the Igbo lecturer, Chris and Ronke the HR, the remote delegate, Chimoney, and many other characters we can relate to. He is that content creator we see ourselves in. From talking about entering danfo to his happy-sad employee photos, The Igbo Wolf’s comic content is a depiction of real-life, nonexaggerated situations. To achieve this, Christain says he doesn’t try too hard, “stories are everywhere, you simply have to look and feel.”

But Christian hasn’t always been like this. To get to this point, he had to waddle past his anxiety and insecurities.

But when it came to the arts, he was a natural. “In primary school, it was cultural dance as usual. In secondary school, I dabbled into directing first of all before I started acting in plays and dramas. All that was my entrance into acting,” he said. 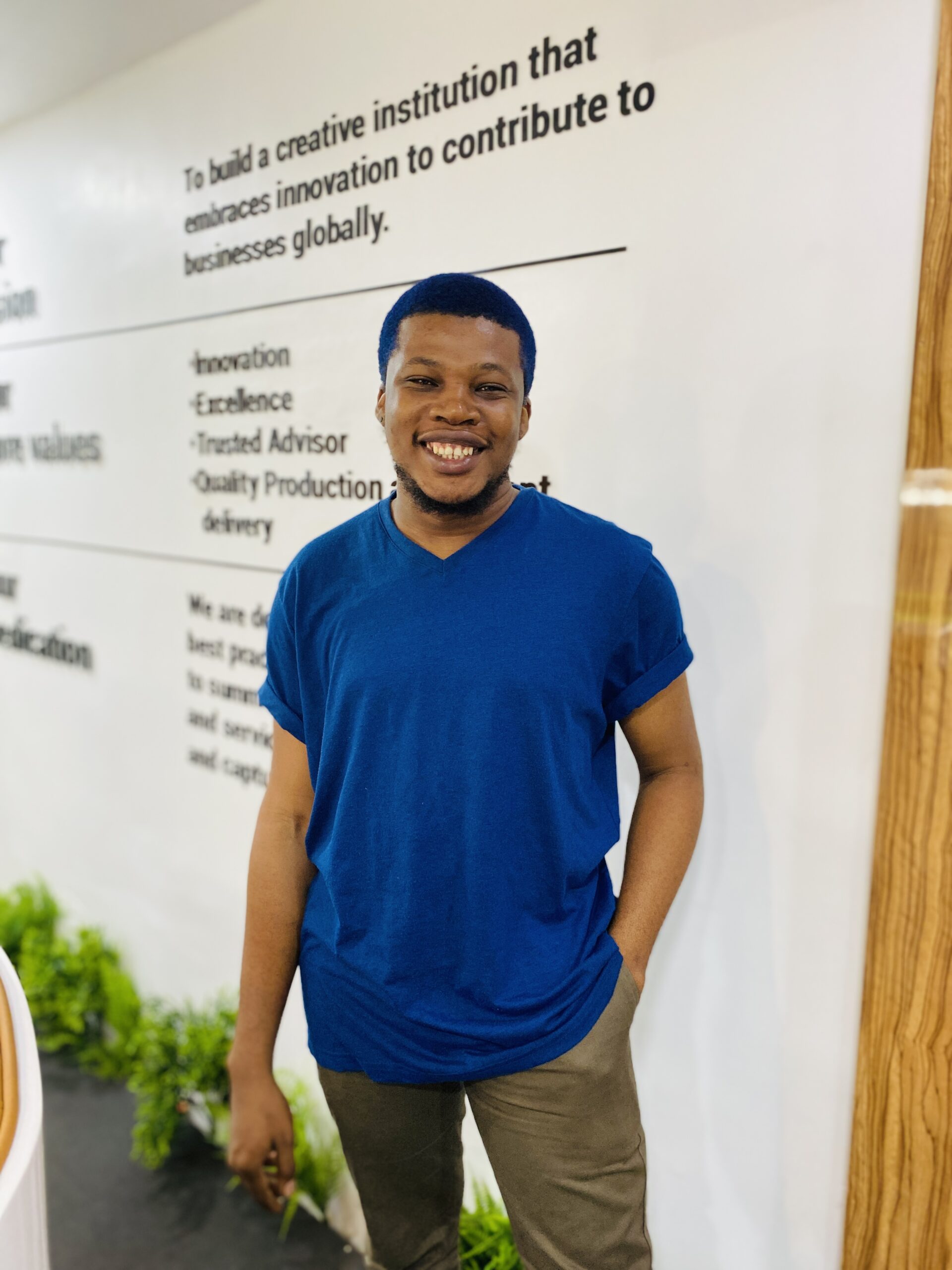 At a time when Super Story had Nigerians glued to their TV screens every Thursday evening, Christian decided he would attend PEFTI film institute. His mom was willing to pay for it but his dad wasn’t going to hear of it. It seemed like the end of his creative journey, but then…

Then I got into service in Yenagoa, Bayelsa. My mum didn’t want me to go, but I wanted to be outside the environment I was used to. In camp, I joined the cultural group, and I ate the entire team up. When I got posted to Yenagoa, I started writing for their cultural group and then dancing and acting. I eventually wrote a play for them.

All this while, Christian was already creating content for Twitter and well on his journey to being an influencer. In 2018, he thought “why not let me take this seriously?” But things didn’t go as planned. He was living in brokelyn, and his phone was breathing its last. For him, there were no resources available for good content. 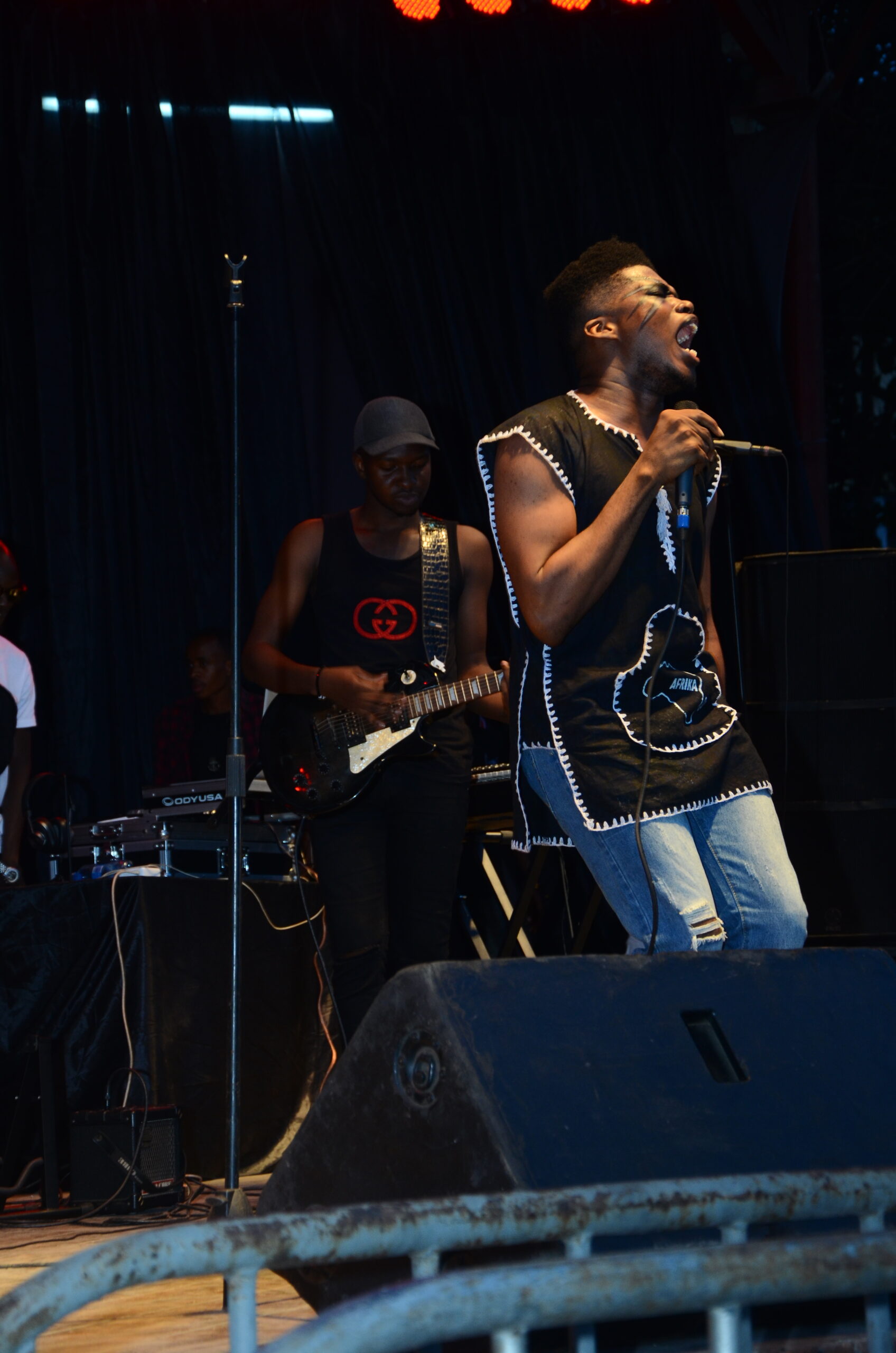 In late 2019, Christian decided to move into data analytics. He resigned from his job to take some courses, but when he finished, the pandemic started. In a period when economies were being plunged into deep contraction and companies were downsizing, Christian found himself jobless. What to do?

I decided to focus on digital marketing, trying to use my Twitter following to earn a little money from brands. It was then I started doing a video on Twitter called Twitter happenings where, at the end of the day, I’d make a video like a news reporter, and post. People enjoyed it. I still didn’t have a good phone – I was using an android phone that had really bad audio, so I couldn’t fall back again into skit-making.

It was in August 2021, when I eventually got an iPhone, that I started making skits.

And then Professor Uwa, the Igbo teacher who mispronounces Yoruba names, was birthed.

While in secondary school, my best friend’s name was Kunle Ogunfowokan, and we had an Igbo teacher who used to call him Kunle kukukonkon. I thought I could convert that ridiculousness into a skit. What I did was to make a roll call of Yoruba names and then include one that had a dirty Igbo meaning.

I don’t like to do cut and join in my skits and want to get everything in one take. But one day, towards the end of the skit, I forgot the line. So I paused for a while and just said “That’s ya name?” and left it there.

“That’s ya name” became the acme of that skit which got over 40k views. People not only loved it, but it also became one of the phrases used with memes on Twitter. To this day, Christian doesn’t understand why people love that phrase, but “they like it? Then they will have it.” 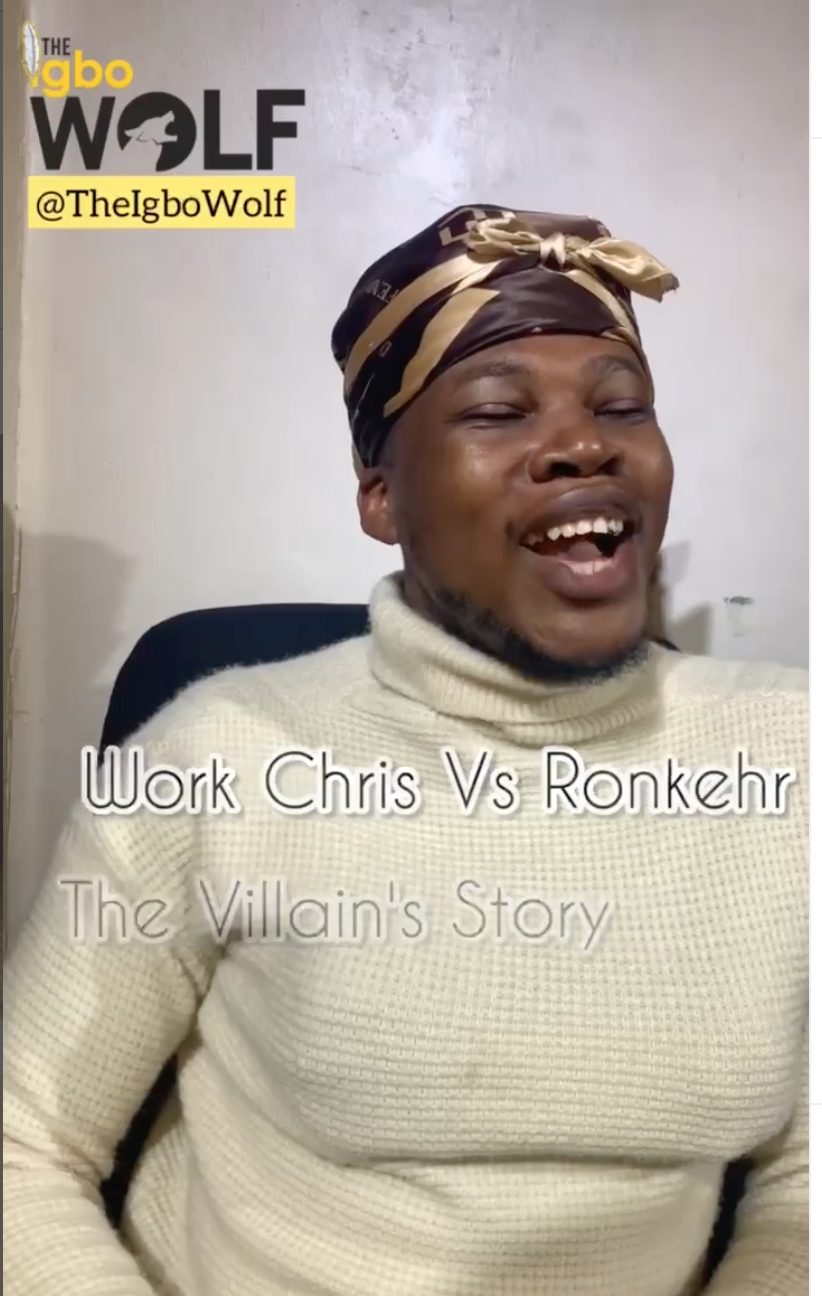 For Christian, creating content is not all about making skits, it is about telling stories. Like the Chris and Ronke HR characters, Christian wants to tell the stories people can see themselves in. In Chris and Ronke HR, he is raising issues faced by employees and imbuing comedy in it.

I battle with valuing myself, especially when it comes to salary negotiation. I’d have all these ideas on how I’d insist on a figure but when I got into the rooms, I’d get weak and I hated that. Everything Chris tells Ronke the HR are things I wish I could have said to some people at certain times of my career because I was bullied in the past.

Christian is experiencing his fears, worries, utopia, and dreams, and he isn’t shy to bare this in his content. But this comes with consequences. In 2022, after a tweet of his went viral, he became depressed. 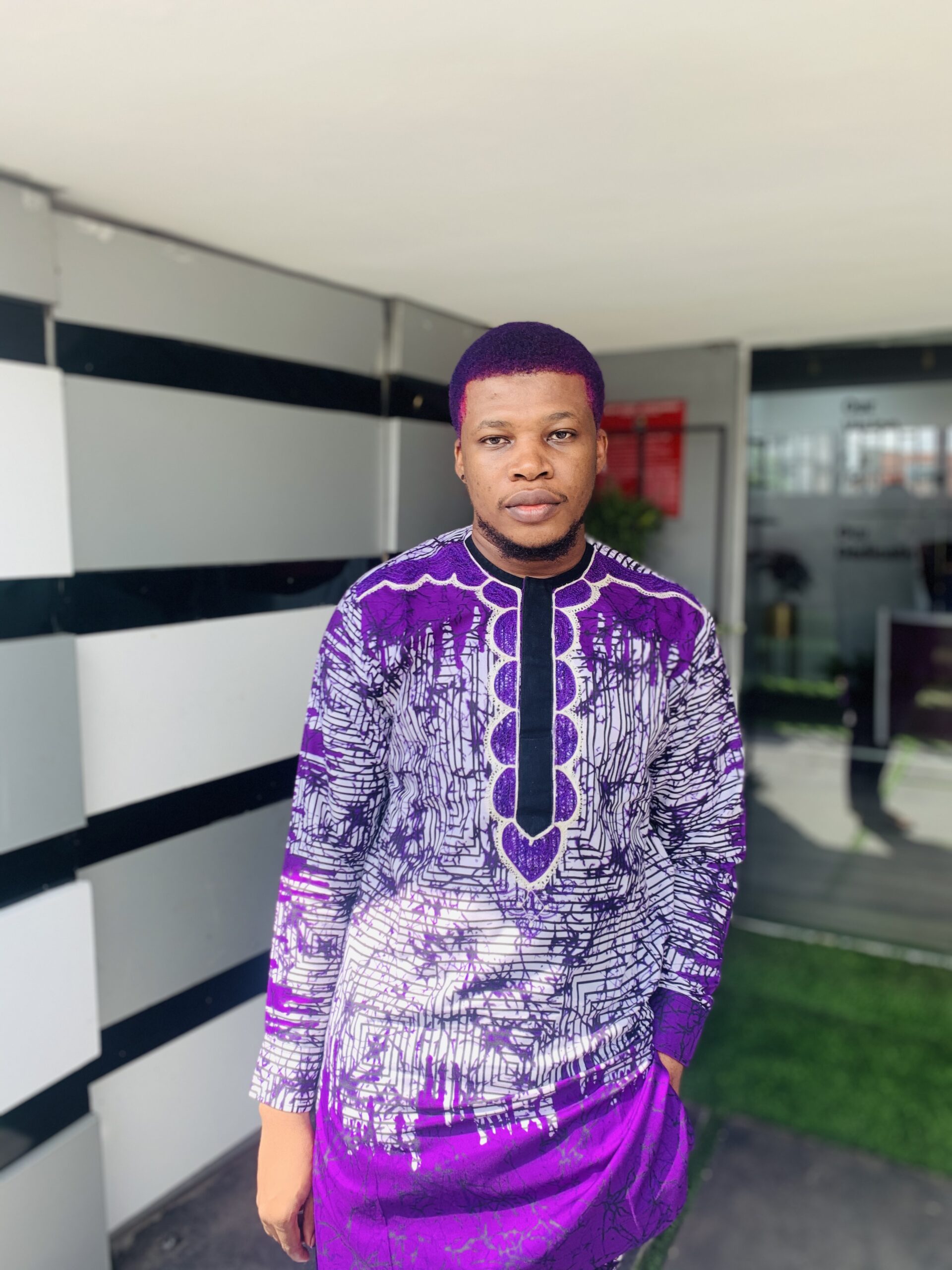 In Lagos, the job isn’t usually the hardest part; it is the commute. When Christian resumed work on the 4th of January after the long break, he realised waking up in the morning and commuting to work became too energy-consuming for him. As someone who uses sarcasm to express his worries and anxiety, Christian took to his Twitter page, uploaded a photo of his sullen face, and tweeted about how he was too happy to be back at work. That went viral. Lagosians who experience the snail-like, excruciating and exhausting traffic every day began to share their sad faces on Twitter with tweets of how work was the best thing to have happened to them.

There were 2 sides of me: there was the influencer who was happy that his content went viral; there was me who didn’t create that just for content’s sake. There was me who was battling something.

I was really happy when people shared their tweets. Even though they weren’t experiencing the same thing I was experiencing, it showed that getting up in the morning to go to work in Lagos was a lot for people. 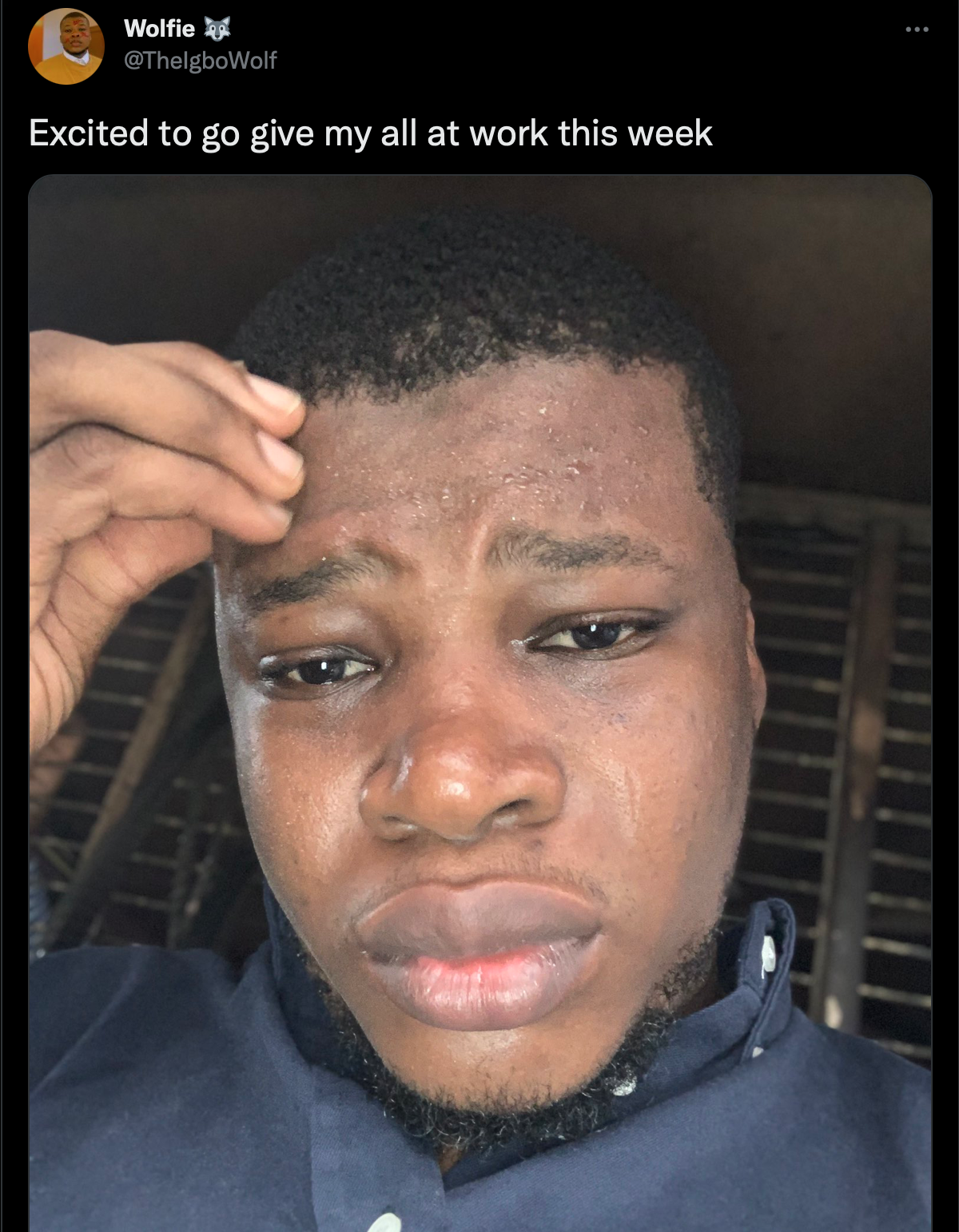 I had been posting that since the beginning of the year but when it went viral, I got stuck; does this mean I can no longer use this as an outlet for my pain anymore? It was a sad period for me. I kept feeling this way every time I went to work and wanted to share, but I knew that if I did that more frequently, people would claim I was milking the content.

And that is true. That tweet got people within and outside Africa talking and sharing their work-related pains. But it didn’t take long for some people to start quoting the tweets with milk emojis. It didn’t end there, someone quoted his tweet with, “I hope you’re not faking it and I pray you’re truly depressed and sad going to work.”

These comments made me feel bad and ask myself if sharing was worth it. But I shook it off, why should I let strangers dictate what I should or shouldn’t do? If you don’t like the content, move past it.”

Being a creative comes with many challenges, “I’m exhausted and tired all the time. As I speak to you, I have 25 pending skit ideas I haven’t worked on. There are weeks I don’t want to shoot anything.” But it also pays off for him, “I get a lot of freebies, and sometimes, people can be so kind to me. I still can’t get over the way I make my videos in the house and it affects people on layers I didn’t expect. And then they reach out telling me how much they love my content and look forward to it.” 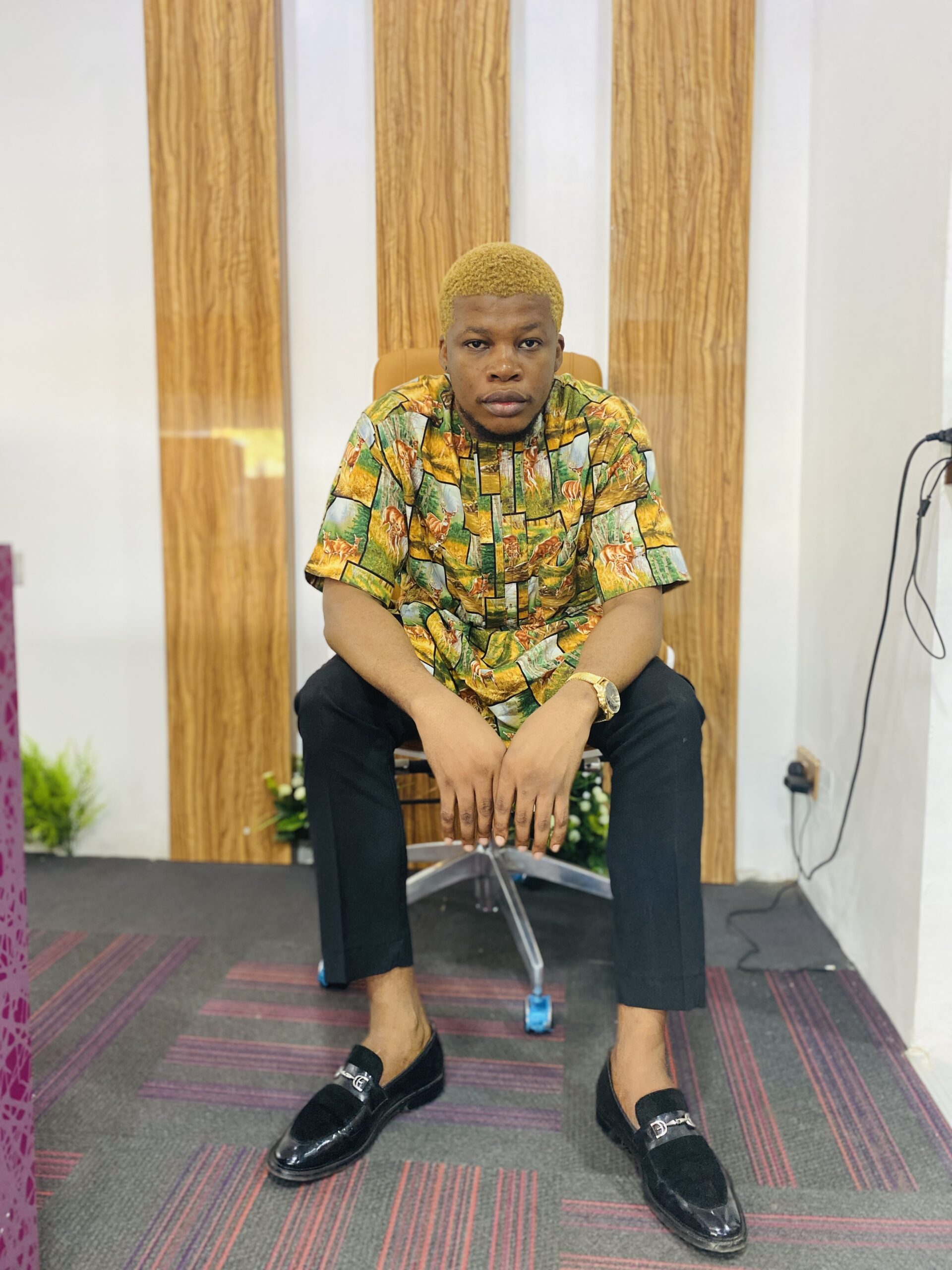 Want to know two fun facts about The Igbo Wolf? He’s a super shy person, “I’m my editor, director, scriptwriter, and all. I prefer to shoot alone. You’ll never see me shoot outside because I’m too shy.” Ha!

He also wants to go into Nollywood, especially…

Those ones we call Asaba Nollywood. I love it. They are as real as they come. All the blunders we see, all the things we mock, that I mock, are as real as they come. It’s where I saw the Genevieve, Omotola, Ramsey Nouah that I grew up to idolise. For me, the dream started from what we now call Asaba Nollywood and I wouldn’t mind contributing my part to that film experience.

Christian absolutely loves what he does as a content creator, and his 9-5 is the perfect cherry on his cake. He is at a point where he is happy with his life. And we are happy too.

I don’t look at other people’s growth and compare to mine. As long as I’m experiencing growth, I’m good. It’s not a competition.

BN Creatives’ Corner is a series that gives creatives living and working in Africa the platform to showcase their work, talk about their journey, struggles and highlights of being creatives in Africa. We have told the story of Anne Adams who bends clay to create stunning artwork, and Nana Frimpong Oduro whose art explores the many aspects of our split personalities, TJ Benson, a writer, Cera Cerni who paints life into walls, Kwame Akoto-Bamfo who is creating a repository of our history and heritage, and many more. You can read them all here.

Many thanks to Christian Obi (The Igbo Wolf) for having this conversation with us and letting us share his story. You can visit his Instagram page: theigbowolf and Twitter: theigbowolf to see more of his works.