December 10th, 2005: The Day Our Lives Were Changed Forever 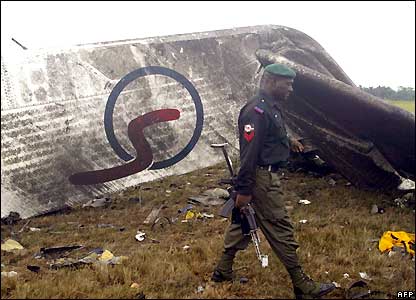 The day was just like any other day. I was home from school for the Christmas holidays. My brothers Ochai and Ogbe were coming home from their schools that day. Ochai was coming by road from Calabar and Ogbe by air from Abuja. We were all excited, but my mum was the most excited, ”My boys are coming home”, she kept saying throughout the week, she was so happy, we all were . We made chicken stew and Egusi soup which they both loved, we cleaned the house and looked forward to a blissful Christmas. We just couldn’t wait.

That afternoon, my Dad went to the airport to pick Ogbe and my sister was at a Christmas party at her school, so it was just my mum and I at home. I remember we were watching the Miss World competition. I remember that it was Omowunmi Akinnifesi that was representing us. I remember my mum ‘yabbing’ some of the contestants. She had also been feeling uneasy and she kept wondering what was keeping my dad. She called him and she couldn’t understand what he was saying, all she could make out was ‘I don’t know how to tell you’, he kept saying amidst his sobbing and wailing. Immediately she jumped up, ran to her room, wore her green bubu (she doesn’t wear it again), and drove out of the compound all the while saying, ‘God, let nothing happen to my boy, not my boy Ogbe’.

I was left alone. By now I knew something was wrong. I tried to pray but I couldn’t. I remember everything vividly. I put on the radio and by then the news was on. A plane carrying school children had crashed at Port-Harcourt International Airport. I called my father to confirm, ‘Daddy, is it true?’, I asked, hoping it was all a sick joke, ‘It’s true, my son Ogbe is no more in this world. Ogbe is gone’. He replied. hmmm… am not sure I can accurately describe what I felt, but i’ll try. My heart dropped. It was such a horrible terrible feeling.

What followed was denial, then shock, then the slow realization that all the people in your house were actually sympathisers, that the wailing and weeping wasn’t for nothing. Yup, someone had died. And death is as final as it gets.The days that followed were a blur, nothing seemed real except for the pain. The pain was and is still so real. It’s sharp, acute and physical. Nothing, absolutely nothing can hurt the way the death of a loved one can.

Ogbe Daniel Okpe was 13 (June 11, 1992-Dec. 10, 2005). Ogbe was a star. a genius. a clown. He was the light in our home and when he passed, the light went out. He was good at everything, sports, science, arts, clowning around and making people laugh, there was never a dull moment with him around. He wanted to be an aeronautical engineer from his childhood and he always told my mum he would build her a car that could fly because she always complained about traffic.

Sosoliso (the name should have warned us) flight 1145 crash landed at Port-Harcourt International Airport, burst into flames and there was no water at the airport. No water and no emergency services, that tragedy could have been avoided 100%. The plane crash killed 103 including 60 students of Loyola Jesuit College, Abuja,(some of the brightest minds of their generation), Pastor Mrs Bimbo Odukoya, Rev. Fr Aloysius Obi (who baptized my brother and 12 of his classmates) and so many others. Two people survived that crash, one of them the beautiful Kechi Okwuchi who remains an inspiration to all of us.

Its been 5 years since that horrible tragedy took place. In those 5 years, we have grown stronger and wiser. Death has a way of maturing you and also teaching you that nothing on this earth lasts forever. We have also grown deeper in our faith. A lot of people asked us why God would allow something like that, but God has not said we won’t face trials, He promised to be with us through the waters and through the fire (Isaiah 43:2) and He was with us. He brought us through and we are stronger than ever. 5 years on and I ask myself if anything has changed. Sadly, nothing has. Nigerians still die unnecessarily and there seems to be no solution. We haven’t learnt from the mistakes of the past and Nigeria’s future is paying heavily for that.

Even though the tears still flow and we still miss them, we will not spend our time thinking about what could have been. We will honour their memories by living life to the fullest and refusing to give up on this geographical mass called Nigeria for by giving up they would have died for nothing.

So this piece is dedicated to all those whose lives were changed that day, Families, friends, schoolmates, colleagues, teachers and even those who didn’t know anyone on that flight, but have faced some sort of tragedy because of our failed system, keep holding on, keep being strong and let’s honour their memories by fighting to make Nigeria a better place.

Related Topics:OmadaSosolisoSosoliso Crash
Up Next

FRIDAY TRACK: Shout your own kind of Hallelujah