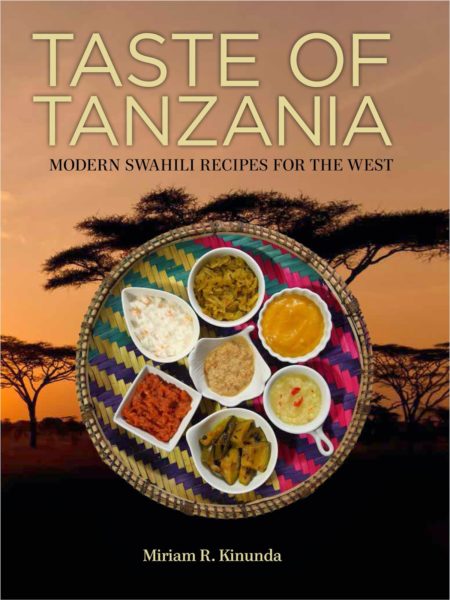 When I was told to review a cookbook, I was mightily excited. This is totally new territory for me despite spending what must be years of my life, (if the hours are added together) spent poring through cookbooks, ever since I was a little girl. First impressions of the book, the cover evokes the warmth of The Safari, which was nice, although I wasn’t sure if the front image told me anything about Tanzanian food, that may just be because I don’t know anything about Tanzanian food.

The first section of the cookbook is an introduction to Tanzanian food which was a good food-education about Tanzanian food, cooking and ingredients. Even better, there is a side by side list of ingredients in their local names, and their English equivalent. The book is divided into 16 sections with standard cookbook nomenclature such as Appetizers and Snacks, Vegetables, Rice, Meat, Sauces, Drinks etc and some sections like Kachumbari and Achali, written in the local lingua. I would do a review for a couple of the sections, especially sections which are closely linked to some aspects of Nigerian cooking and sections which contain dishes that are totally way off, which may pique your interest to try out Tanzanian cuisine.

Very common ingredients in Tanzanian cooking are coconut, garlic, ginger and cilantro (coriander). It is commonly used in very many of their dishes. I can only imagine that Tanzanian cooking would be quite aromatic, sweet with that extra special flavour that coconut adds to cooked food, and fresh too with al the garlic, ginger and cilantro (coriander). My impression of Tanzania cuisine, there are lots of Indian elements in their dishes. Examples such as Pilaf, Samosa, Bhaji, cardamom, currys, chapati, kalimati and chutney.

I will review the book in sections.

Appetizers and Snacks
In every culture, there are dishes that fall under the above named category, and Tanzanian cooking is no different. Under this category are recipes for Meat Cutlets called Katlesi Ya Nyama. Think of this dish as fish cakes, but made with ground beef and spices such as cumin and black pepper, and fresh aromatic elements such as garlic, cilantro, onions, hot pepper and lime juice. As expected, there is a Fish equivalent called Katlesi Za Samaki, using the same ingredients.

Other meat recipes under this category are the Swahili Kebab called Kababu, Samosa -Samosa Za Nyama

There are also vegetarian options such as Achali Ya Mboga, which is basically a fruit salad. Bhajia, (which is similar to the Indian Bhaji) and Kacholi – made with potatoes.

It was interesting to find that Cassava plays an important part in Tanzanian cuisine. As we would have Yam Chips and a dip of some sort like Ata din din (fried tomato stew), there was a recipe for fried cassava called Mhogo Wa Kukaanga, served with Pilipi Masala ground spice powder. As we would have Boli (roast plantains) for a snack, In Tanazina they also do, and they call it Ndizi Za Kuchoma, and it is served with our own version of ata din din

Soups
It is quite interesting to note that soups in Tanzanian cooking is seen as a one pot dish like our Peppersoup, but more interestingly as the Bachelor’s breakfast. Most meat and fish soups in Tanzania are known as “mchemsho” meaning something that is boiled. Mchemsho can also have anything mixed to make it. Common ingredients to make Mchemsho are green bananas, cows feet, ginger, garlic, onions, lime, tomatoes, beef bones, back pepper, tamarind, potatoes, cabbage and so many more ingredients that are common in cooking all over the world.

Recipes to try under this category are Makongoro Soup – Supu Ya Makongoro. Makongoro means cow’s feet. This is what we would call Cow leg pepper soups, eaten with boiled potatoes. There is also the chicken version called Supu ya Kuku and the fish version called Supu Ya Samaki. The ingredients are basically the same save for a few additions and subtractions.

Seafood, Meat and Rice
The most fascinating sections of the book are Seafood, Meat and Rice. The pages are leaping off with delicious looking stews, curries and sauces. We as Nigerians do stews, but not like the Tanzanians do it. We would have a pepper mix, and our choice of meats and fish, but they bulk theirs up with lots of other flavour packed ingredients.

Seafood – I particularly loved the Mchuzi Wa Samaki Na Mboga Za Majani – Fish Stew with Vegetables. Quite a mouthful isn’t it. It is simply a fish stew marinaded, fried and then stewed with potatoes browned in a pan, sautéed onions and garlic, which are all stewed with tomatoes, carrots, spinach, okro and coconut cream. It looks just as delicious as it sounds. There are other fish dishes such as Fried fish with Tomatoes called Smakai Wa Kukaanaga Na Nyaya, Fish In Coconut Sauce, and Fish in Peanut Sauce. The Prawn equivalent is , Kamba Wa Nazi – Prawns in Coconut Sauce, which is basically a Prawn curry cooked with tomatoes, onions, garlic, ginger, black pepper, turmeric, tomato paste, coconut cream and cilantro. Grilled fish is also popularly in Tanzanian cuisine, they call it Samaki Wa Kubanika

Meats – As with fish, meats in Tanzanian cooking is made into rich stews, sauces, and currys. It is also roasted, grilled into Kebabs, barbecued and cooked with eggs. I would not twist your tongues further with the many names of the dishes.You have to buy this book, if for nothing but to impress your guests with the names of the dishes. Watch their faces light up and their tongues twist with trying to pronounce the names, and then finally wow them when they realise it is familiar food, but cooked Tanzanian.

Pilau La Sikuku also called Holiday Pilau, is similar to the Nigerian fried rice, but with extra ingredients such as coconut cream, sultanas (raisins), and cashew nuts. I can already imagine this tasting delicious. Many of my favourite things all in one plate. Yum. Other variations include the Meat Pilau and Vegetarian Pilau. Included in this book are also recipes for Coconut rice, Peanut Butter rice, which made me jump out of my skin and Wali Wa Mseto which is our Rice and beans.

There are other very interesting sections in the book including Bananas, Cassava and Potatoes –. You really want to buy the book to see the rally delicious ways Tanzanians cook with bananas and plantains. It makes our Dodo, Plantain Moin Moin and Mosa pale in comparison. Potatoes and cassava are definitely not boring in Tanzanian cooking. I would leave you with those teasers, while you look forward to reading it yourself in the book. Also look out for the section, Kachumbari, which means Salads in Tanzanian Cooking, Achali which means hot sauces. Here you will find recipes for chutneys, masala and other spicy hot sauces.

Review Summary
Reading this book has really opened my eyes to East African cuisine. Even though I am anti the term – African food, because I would like each food culture in Africa to be represented for their individuality, just as it is in Asia and Europe, I wasn’t expecting that many similarities at all, so it was a nice surprise. Is this book a modern twist on traditional Tanzanian recipes? Yes, Yes, Yes. If you have never tried out Tanzanian cooking before, the recipes are simple and easy to follow. The ingredients can also be locally sourced, wherever you live.

Maybe this is me being a food purist, who likes to see truly local or should I say native ingredients in a dish from an African country, this was lacking. That may either be because Tanzanian cooking is very cosmopolitan, or the author of the book wanted it to come across that way, I don’t know.

I would also have loved to see better quality images, but overall, for a first time publisher, I salute the effort that went into writing this book. Well done Miriam Kinunda.