Yane K: These Streets Have Names 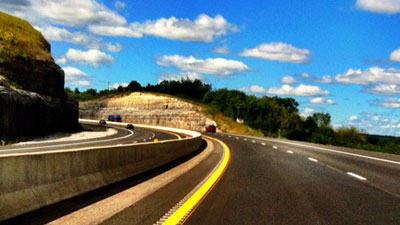 Dad floored the pedal and the Peugeot 405 sped down the 2-lane expressway. There was hardly a soul in sight on this dark rainy night but he didn’t want to take chances. I said a silent prayer as I kept my eyes peeled, scanning the horizon. I needed to see what was coming. But tonight the streets were empty as most people had retired to watch their favorite TV shows before they turned in for the night.

“You would have to be crazy to drive on Bauchi Road” they say, “Don’t you know it’s the Gaza Strip?”

The mere mention of Bauchi Road sends shivers down the spines of most residents of this great city but not my dad. Mr. 007 as I prefer to call him. He never took “No” for an answer. With him there was always a way and so I usually trusted in the decisions he made. Not tonight though, I wasn’t feeling as confident as my plastic smile suggested. It didn’t really feel like I was riding with James Bond,  it felt more like we were riding through the ‘valley of the shadow’ and I needed to stay focused on the task, we get there, do the pick up, and head back. Who knew you needed to calculate logistics just to pick up your sister from the motor park at Terminus. But our paranoia was justified. You see, Bauchi road has always been ground zero for anything riot oriented that was jumping-off in my beloved Tin city. If the students of the University of Jos where staging a demonstration, their “Great Josites” clarion call would echo throughout Bauchi road. If there was a religious uprising, Bauchi road would be the vein that either fed it or starved it. You see, Bauchi Road was the artery that brought commerce, economy and life to Jos and I have had the absolute pleasure of growing up on that road. However, what I saw a few years ago totally disrupted my well preserved memories of this peaceful town. It was once known as the home of peace and tourism, sigh, there has been anything but peace there, lately.

A few days after our daring Terminus trip, while mum and I rode into town to run some errands, the message really hit home for me. My mum being the risk averse wise woman that she is, would usually take an alternate route, the ring road which takes twice as long to get into town to run her errands while dad in his stubbornness will take Bauchi road (the only person alive that takes that road twice a day everyday).

Apparently, there is an unwritten rule now in Jos that certain areas are forbidden to people of a certain religious orientation. For example, while Muslims ply Bauchi Road with ease, Christians would rather take the longer, less congested Ring road to get into town and so on. It is an unwritten agreement and everyone seems to know where you can or cannot go except returnees like me. Frankly it’s upsetting to know that this once peaceful place has been carved up on a butcher’s block of segregation and left to rot, but I digress.

As mum and I sped down Bauchi road on this fateful day we came to a searing halt, as we were immediately caught up in serious traffic with crowds lining the streets. Panic started to rise as we both craned our necks to see what was happening ahead, what was causing the traffic and why there were so many people lining the sides on the streets (these days in Jos when you see people running, you don’t stop to find out why or what is chasing them, you just run like they do). Just then my phone rang and as I answered, I saw my mum quickly reach for her veil and wrap it around her head and shoulders. It dawned on me that I was wearing jeans and a t-shirt and if it came down to a ‘car inspection’ I may be dragged out of the car and harassed depending on who is doing the ‘apprehending’.

I tried to sound as casual as I could so my friend on the phone would not panic but courage failed me and he could hear it in my voice. He even suggested I carry a change of clothes with me always, just in case I needed to ‘adjust’ my dressing to suit the ‘occasion’. But hang on, when did Jos become this place where people get attacked solely on the basis of how they are dressed? I did not recognize my town anymore, it had become a distant foreign land and only time would tell if it can be pulled back from the brink. Until then, I will reminisce on the by gone memories of sweet bitterly cold Christmases in Jos where if you close your eyes just so and linger in the harmattan winds blowing through Eucalyptus and Fir trees, you just might believe you were in a winter wonderland.

I miss you J-Town.