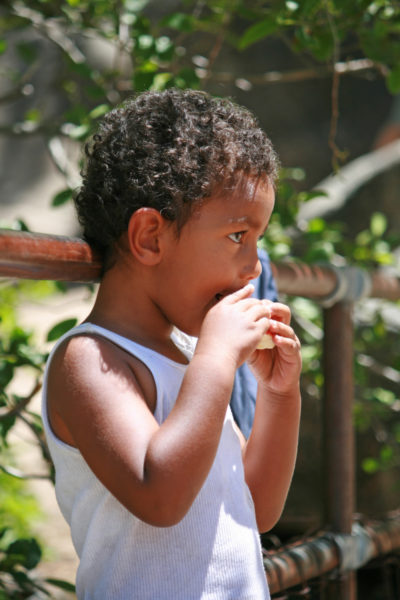 The sun is high up in the sky; they say it rises in the east. He imagines this must be the east because it has blasted down upon his face each morning in the last five days at the same angle, jolting him from his sleepy reverie to face the harsh realities of life as he knows it.
A nomadic existence is what he knows, not his parents, not how he came to be on this planet or to whom he belongs except for the old man. He follows the old man from every village and shack they are chased out of to the next, day after day, month after month, year after year. They are each other’s family thrown together by no known explanation. The only reason they have stuck together so long is because theirs are the only pair of eyes to welcome each other with a nod of recognition each day.

Words are hardly spoken between them; it would seem the only understanding needed between a poor 70-year old man and a timid 10-year old boy is the age-old fundamental necessity of every man – food in my belly, water on my tongue, clothes on my back, and a place to rest my head at night. Thus, they would spend most of their days begging from driver to pedestrian, scavenging the dumps for a meal or scrap to recycle into bedding.

Five days has been the most time they have spent in any one place in a long while. They must have run into some luck at last, the boy thinks; this place seems much better than the last one- it is in a forgotten part of town so they may be less likely to be chased out sooner. This one has an old plastic rug overhead which is better than pretending that the pelts of the rain are his mother’s hands stroking him to sleep. The mosquitoes also seem to be on some kind of vacation; although of course, there are always the rodents and insects to contend with.

It is another Saturday, he is not sure if his sleep was interrupted by the harsh flash of sunlight or the loud growls from his belly or perhaps the murmured sobs of the old man in the corner. He turns on his side, pulls his knees to chin level and tries to shield his eyes and ears simultaneously with his hands to no avail. Saturdays are usually good days to acquire ‘substance’ with the myriad of wedding parties that take place around the metropolis but of late things have been hard. People seem to have little or no tolerance for the ‘beggars’ and they are often chased away by the security officials. Last week, he went the whole day with hardly a drop of water and might have passed out if the old man hadn’t saved some water from the previous day. With their little stroke of luck, he hopes today would be different.

He gets up, picks up his unfinished chewing stick from yesterday and proceeds to give his mouth a quick scrub. He then takes the remaining water left in their jar and feeds it to the old man before he steps out into the streets. He would travel by himself today; he has to, or they would both starve to death. He has watched his singular pair of trousers which he obtained from the waste thrown out by a local tailor several months back, get bigger each day. Today, he has to use a rope to hold it in place. The pair of trousers, the torn old school shirt on his back and the worn out unmatched pair of slippers on his feet are his only possessions in the world. He has never been within the four walls of a school; sometimes he would watch his mates as they filed out of the school gates all chatty and exuberant, and he would wonder why he was so different.
Anyone who looked down the street would probably notice the cars parked alongside, the lush trees that surrounded the area, possibly the stray dogs that barked occasionally but they would hardly notice a frail-looking kid in worn clothes strolling down the road with all the hunger in his eyes, who may not live out the week if he cannot find food to feed on today.

He walks on, relying on his hearing to lead him to the ‘sounds’ of food. He has walked for an hour and can’t seem to move any further. He considers going to ask the road-side bean cake seller to spare him a piece of her bean cakes or perhaps he might be able to snatch one and run as far as his legs would take him but considering that he can hardly take another step, he discards that thought. Suddenly he hears the sounds he has been waiting for; somewhere down the road- the sound of gregarious laughter carried over the public address system- the sound of people partying. He slowly makes his way towards the location hoping to sneak past the security without being noticed. He can tell it is a wedding party by the fancifully decorated cars lined up along the driveway. Before he can get within seven feet of the entrance, the menacing voice of a security guard warns him of his impending doom should he take a step further. He hides in the shadows, waiting for a moment of lapse when he can sneak past the guard and make his way inside in the hope of getting some of the food remains of the guests.

After hours of waiting and threats from the guard, he is about to give up- he lingers on the dangerous precipice between giving up on life and turning into a deranged child who will do anything to survive. On the verge of tears and anger, he is not sure what to do. Just as he turns to walk away, a beautifully dressed lady walks out of the venue with an armload of items (purse, wedding brochure, phone, souvenirs, and so on). She stops abruptly and looks around in a state of exasperation, then she turns and notices the boy, walks up to him and hands him a little nicely wrapped package and then walks away briskly. The boy is surprised at first, and then becomes giddy with pleasure at whatever the package might contain. He clutches it tightly and runs to find the nearest bush covering where he can open his gift privately. Quickly, he tears apart the wrapping to reveal a sizable chunk of yummy-looking cake and as he beholds it, he almost cries in relief. Just as he is about to gobble it up, he looks up and finds a pair of eyes much bigger than his, staring down at him- a boy about his age, only shorter and thinner with a more protruding belly. He can tell they are about the same age because the face looks older than the body that carries it. The thinner boy is at the brink of tears with his eyes intently fixed on the piece of cake in the other boy’s hands.

The boy cannot imagine how the thinner boy came to find him here; perhaps he had been following him. He looks at the piece of cake in his hands, looks up at the hungry face of the thinner boy, puts his hand over his belly as he hears the growls once more but then breaks the cake in half, gives a piece to the boy waiting on him, and together they collapse on the ground and eat their first and perhaps only meal of the day.