Seun Akinlosotu: We're Going to Have Sex... But Let's Say a Prayer First! 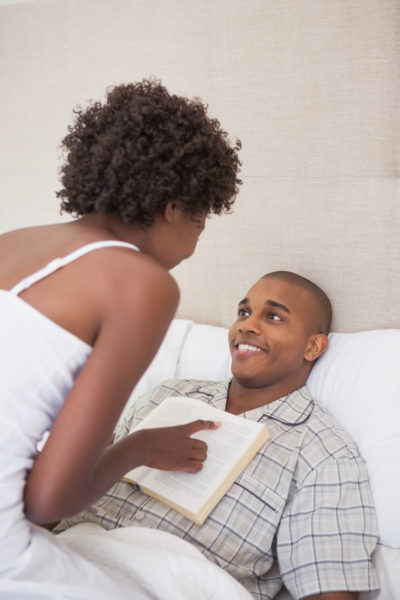 Jerusalem Trip, a.k.a Jeru Trip is sort of a coded word or lingo used to describe sex. You are more likely to hear this word used among women, especially the shy ones who have a problem directly using the word “sex” due to the flushing of their cheeks, sweat forming beads on their forehead, or heck – their whole body doing gis-gis at the mere mention of sex. Yeah, those women. I don’t know who coined this alias but I’ve heard it many a time on various social media groups and frankly I love it. What I don’t understand though is the need to share a prayer before embarking on the journey.

As usual my thoughts are provoked by conversations I may have been a part of, or overheard; and you bet I was very much in this one since I brought it up in a group anyway.

In order not to throw someone I respect much under the bus, I won’t go into 100 % details here but let’s just say an upcoming social event amongst an under 40 Youth group I’m a part of, was to be preceded by Prayer, Praise and Worship. When I first heard the instruction I was like you’re kidding right? Do we really need to?

Prayer and Praise calms people like me down and frankly knocks some sense into me, but sometimes I don’t want any sense! I just want to be “Extra” but now I can’t be because this event will start with my “medicine” Arghhhhh. Anyway sha, I have since gotten an explanation as to why that is necessary because of the location of the event so it now makes total sense to me.

However, my thoughts did not stop right there. I then started wondering about what other things those of us very into our various religion – be it Islam, Christianity, Buddhism, etc. supposedly pray about before engaging, and so I decided to post it in my Youth group’s page. I went to sleep and woke up to almost 100 messages back and forth between 8 people. Please what just happened? All I asked was a simple question and the group was on fire.

My question was simply this:

For the married folks who had some form of marriage counseling, was there counseling per sex? And if so were you and your spouse told you have to pray before engaging in “Jeru” trips? Is there anything you do during Jeru Trips that’s influenced by your religion or spirituality?

I mean, it’s just a question now … I think. Needless to say, the group was divided on the necessity of sharing grace before Jeru. As absurd as I personally think it is, someone said, “Yes you need to pray to ensure you don’t end up shooting blanks”. Someone else said most definitely to prevent “hit and run”, while another said “yes, to create a spiritual environment”. Someone else said “Please why are you praying before Jeru trips? It’s meant to be spontaneous”; and so it went on and on. Now I should mention it’s the men in the group who are advocates of Grace before Jeru.

As I was reading through the arguments which eventually took another dangerous turn, (can I just chip in here that I really feel bad for men, especially Naija men. You people have suffered in the hands of Naija women sha. This is another story for another day) lest I digress.

I started thinking about what I would do if during marriage counseling the counselor does suggest sharing Grace before Jeru. If the counselor were to be a man, would I go corner the wife in the hallway, drag her into the utility closet with me and ask her to confess how Jeru really goes on in their house. Is her husband trying to pull a fast one on me? Does it make a difference if we pray or engage in any other spiritual ritual? Will my Jeru be unauthentic? Does it need to be sanctified? Is it more enjoyable – you know how there’s bread, and then there’s Agege Bread and we all agree Agege Bread is the shiznit because of that extra chemical they put in it. Well, will our “bread” be like regular bread or will it have the “Agege Bread” extra satisfying factor?  Will there even still be a Jeru trip after we’ve prayed?

Yes, we know Jeru trips involves an emotional and spiritual connection between 2 people but do we need to go this far?

I’m a Christian and I know myself quite well; if my honey says oya let’s do the Lord’s Prayer before Jeru and we actually do it, I would most likely be staring at the four corners of my wall wondering if there are Angels in observance. Any slight breeze like this, I would take cover sharply, thinking we are not alone. Ahhh … nah, no way, I don’t think so. I think Jerusalem trips are meant to be spontaneous, and enjoyable; not on a time table with invited guests. How can you go and invite your parents to come and watch you while boning? Isn’t that’s kind of the same thing with praying before? I also decided to ask one of my besties and after laughing at my weirdo question she says “Oh, you haven’t heard of reading Songs of Solomon before Jeru trips?”

As foreign as this idea sounds to some of us this could actually be the right thing to do, so you who’s wrinkling your nose at the idea, and me who would be seeing Angels on walls could have a lot of learning to do.  I would like to actually ask if there’s anyone – regardless of religion who does this, has done it or has been advised to do so. If you do share pray or engage in any other form of religious or spiritual activity before going to Jerusalem, what and how do you do it? Do you hold hands and pray outwardly, inwardly, or pray separately without it being obvious to your spouse? Incense maybe?

Please do tell, educate the rest of us.
Love is a Beautiful Thing.

Young Love! All You Need to Know about Davido’s New Girl, Sira Kante