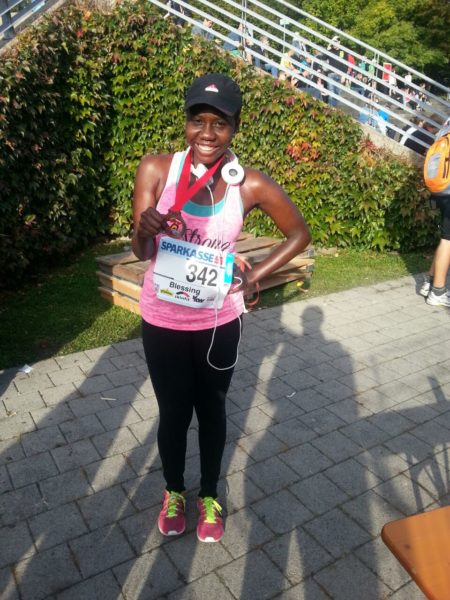 If someone had told me I would run a marathon across 3 countries a few years ago, I would have laughed till I peed in my pants. A few years ago, I was so overweight that I could barely walk up a flight of stairs without gasping for air. Everything changed one day my second year in university, when I had to do a BMI test as part of the requirements for my health class. The results I got shocked me- I was clinically obese. That day, I reached a turning point. I started by making small changes to my diet, and by going to the gym for a few minutes every day. Slowly but surely the pounds started to fall off. The first time I ran a full mile in the gym without stopping, I had tears in my eyes. It was something I never thought I would be able to do, and in that moment, my definition of possibility began to expand.

Fast forward to October 4, 2014: that day, I finished the Sparkasse Marathon. The 42.2km race began on the picturesque island of Lindau (a southern Bavarian city in Germany), and took me through several towns in Austria (Lochau, Bregenz, Hard, Fußach, Höchst), over the Swiss border to St Margrethen (a town in Switzerland) and back to the finish line at the Casino Stadium in Bregenz, Austria.

During the 6 months prior to the marathon, I trained as much as I could. From the Lekki-Ikoyi Bridge to the Brooklyn Bridge; from Millennium Park to Central park- I ran hundreds of miles through Abuja, Lagos and New York in preparation. Those miles gave me many hours to think, and many opportunities to learn. Running is such a metaphor for life!

Here are 5 life lessons that I learned while marathon training:

Just Do It
There were many valid reasons why I should not have even dared to set this goal for myself. In 2013, I got a lung infection that made me sick for a good portion of the year and unable to do intense exercise. By the start of 2014 my health was much better and I asked myself: What would you do if you weren’t afraid? Run a full marathon was one of my answers. The first few times I tried to run, I got bad asthma attacks because of the fumes from all the old trucks and cars on Abuja roads. But I was determined. I got the medication I needed from my doctor, and woke up super early when the roads were mostly clear of vehicle exhaust to begin my runs. There were many mornings when the last thing I wanted to do was wake up for an early run. There were many more, when I was terrified of the running goal ahead of me. The hardest part was always just getting out of bed. Once I made it past my front door, 50% of the battle had already been won. What I learned? Discipline and consistency are much more important that intensity. Do it tired. Do it afraid. Pray through it if you need to- but Just. Freaking. Do. it. 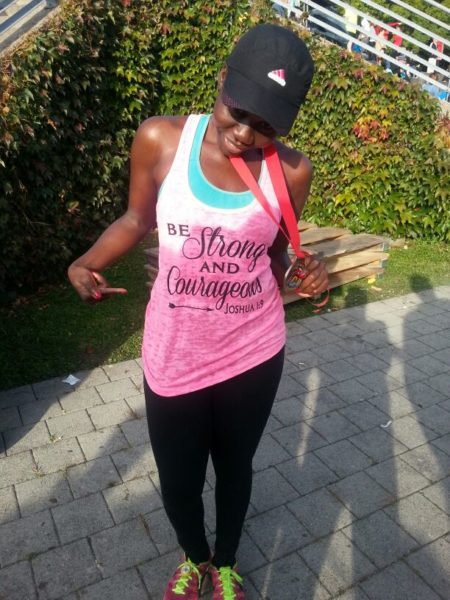 Be Your Own Cheerleader
13.1km. 16.25km. 20km- to some, these are just numbers. But to me? These numbers represent running goliaths that seemed insurmountable. They represent hours of training coupled with prayer, endurance, self-talk, sweat, pain and sacrifice. I remember the first time I ran 22km (which is a little bit more than a half marathon) on my own. I was so excited and couldn’t wait to tell everyone when I got home. “Oh, that’s nice” they said and went about their business. I was so furious! When I calmed down though, I realized that my family meant no harm and just simply had no frame of reference for what I was doing. I quickly learned that I would have to be my own biggest cheerleader and not wait for anyone to celebrate my small victories. As my runs got longer, other runners or people on the streets would smile, clap or high five me, and it was encouraging. The day of my marathon- my family made me feel like I was an Olympics gold medal winner, and it was truly humbling. But before any of those moments came, I had learned to celebrate myself.

Push Past the Wall
Every long distance runner has at some point ‘hit the wall.’ The wall is a period during long distance running when fatigue begins to transition into diminished mental faculties. It can cause dizziness, hypoglycemia and even hallucinations. I will never forget my encounter with the wall. I was on a 30km run, and somewhere in midtown Manhattan I started getting dizzy. I could barely put one foot in front of the other or remember my name. I had had other stressful running experiences, but this was different. I wanted to break down on the street and just start sobbing. I questioned my sanity and all the life choices that had brought me to this moment. But my spirit remained strong (even though my flesh and mind had tapped out), and I completed my run. It was such a scary experience that I didn’t run for a week after that. Somehow though, the next weekend I was back at it. Mind Spirit over matter. The next time I had a long run, I made sure that I a healthy breakfast before I left, and that I was properly hydrated and prayed up. I made it through my longest training run- 35.5km- without hitting the wall. In fact, I smashed the wall: I felt exhilarated- not exhausted after the run. If I had decided to give up after encountering the wall the week before, I would have never known the joy that was on the other side of it. 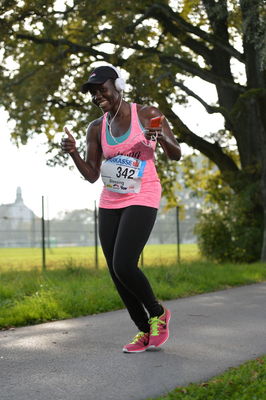 Always Remember The Finish Line
What kept me going throughout my months of training, was imagining what it would feel like when I crossed the finish line. During the last few yards of the marathon, I was on my last leg. Two European women who could barely speak a lick of English, grabbed my hands and ran with me to the finish line. It was such a beautiful, surreal, life-changing moment. As the announcer called my name, I realized that all I had imagined for months had finally become a reality. I was amazed not just that I had finished, but that I had found the courage to start.

Enjoy The Journey
Getting my marathon medal was such a proud personal moment- but it was also a fleeting one. What I enjoyed most was the journey. The feelings of accomplishment when I said no to the snooze button, and strapped on my Nike’s. The high I got from puffing my inhaler and telling asthma it could not stop me. The days when I learned to stay in my lane and not compare myself to other runners. The weeks of finding rhythm in the monotony of consistency. The constant recognition that in all things, God’s grace is available. These are the moments that light up a life.

Princess Simysola: Letter to the Superstars

Blessing Omakwu is a Lawyer/Writer and lives in New York City. Find her on social media: @BlessingOmakwu.