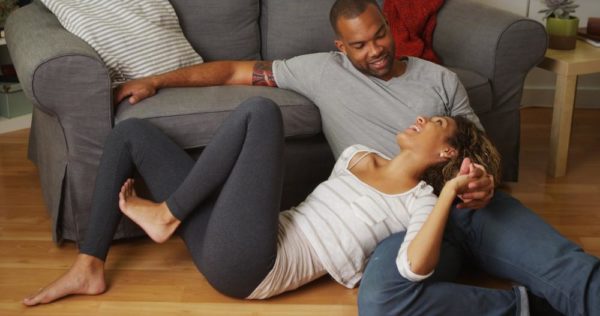 Macy sat beside me on the 2-seater sofa in my sparsely furnished living room, my hand resting in her lap as she absently rubbed her fingers over mine. Spending time with her, just us two, was one of my favorite moments.
All was quiet except for the indistinct conversation coming from the television. I glanced briefly at her and I noticed her eyebrows were drawn close, and even though her eyes were fixed onto the TV set it didn’t seem like she was actually watching. I made to ask her if all was well with her, but then I decided against it. In the short time we have been together, I had come to understand that sometimes she just let her mind wander and so I settled back into the sofa and continued watching the movie.

A few minutes later, in an almost inaudible voice she asked “Can we be friends?”. With eyes glued to the TV, I answered with an amused smile on my face “friends? Aren’t we that already”? But as no response came, I turned to look at her and I noticed the seriousness in her eyes. “I don’t mean this type of friendship” she said gesturing to our clasped hands “I want us to be good friends”. At that, I began rubbing my palm across her thigh as I quipped, “Oh, you mean like girlfriend and boyfriend?”. But she stilled my wandering hands and gave me a puzzled look that made me immediately realize she was trying to dump me.

Well ‘dump’ isn’t the best word to be used here because we weren’t technically in a relationship. We hung out, we made out a couple of times but we were never decisive as to what we were doing. “I haven’t been entirely honest with you Ike”, she said “and I will come to dislike myself if I continue being dishonest” she continued. I turned fully to look at her as with misty eyes she plowed on “I wasn’t truthful with you and even though I know you never quite asked, I hid from you the fact that I had a boyfriend”

“W-what are you saying Macy?” I stammered as I withdrew my hand from under hers. At this point, I could feel the sound of my pounding heart in my ears, so much it seemed to be buzzing. Then she responded, “We’ve been dating on and off for 2 years, but last week he asked me to marry him and I said yes”.

I felt my body start to shake with anger so I got up, and with clenched fists shoved into my trouser pockets, I paced the cool tiled floor as I pondered on a response. I could feel the anger rushing in as I walked back to her and bellowed, “And you just decided to tell me now? After what 4 months? What am I to you? A pastime?” All of a sudden it seemed like my throat was closing up and my breath was coming in short gasps, so I walked to the window, raised the blind and inhaled the cool evening air. I heard her rise from the sofa but I couldn’t turn around to look at her and then I felt her wrap her arms around me, resting her head on my back.

I desperately wanted to turn around, grab her by the shoulder and shake her until she admitted that it was all a joke, but deep down I knew it wasn’t because I had never seen her more serious. It was then she spoke softly “I will totally understand if you hate me, but I’m hoping you don’t. I can’t stand knowing you hate me. I value your friendship and I have come to care a lot about you”. For a brief moment, all i could dwell on was how warm her bosom felt pressed against my back. So instead of giving in to my baser instinct, I leaned my forehead on the cool window glass and with a terse voice I said “Macy, I really can’t do this right now, please leave”. She clung on for what seemed an eternity and then she slowly unclasped her arms and stepped back. I could hear her soft almost hesitant footsteps retreat slowly as she picked up her purse and left.

***
Macy and I met at a party in May. It was one of those crowd packed events where everyone who was cool in Abuja attended. My friend Deji who was among the organizers had given me an invitation 2 weeks before which I had halfheartedly agreed to go. As a matter of fact, the monotony of Abuja social life had begun to bore me. I knew this party was going to be same as others, with the same faces over and over again. A blend of young women with skirts too short despite the possible rainfall and guys in jeans and T-shirts with funny text stenciled on, holding one glass of drink throughout the party pretending that they were having a good time. But I figured, if I became bored on that day, I just might pop in for a little while.

As it so happened, the FA Cup had just been concluded the day before, with my team Arsenal recording its 11th title. Still pumped up from the previous day’s victory over Hull City, and as there was nothing interesting showing on TV, I decided to pop in. As soon as I got in, I quickly found my friends at a table and after sliding through the hard pressed crowed, I was finally able to reach them. While pulling out a chair to sit, I knocked over a glass on the table and it spilled its content into someone’s lap. I immediately expected an angry outburst but instead she flashed a pearly white smile as she collected the serviettes I had grabbed and began dabbing on the stain. As I apologized, I took the opportunity to take in her appearance.

Dressed in jeans and a T-shirt, with her hair swept up with a ribbon, she was quite an oddity in the bare skin room. As we settled back into our seats, I introduced myself and struck up a conversation. I soon had her leave the company of her friends and sit by my side the rest of the evening. We talked about everything and I came to find out she was an Architect. She looked petite and delicate for such a profession, she was soft spoken, with lean arms and a geeky looking glass perched on her small nose.

By the end of the night, I had learnt that she was an only girl with 3 elder brothers, her best colour was blue and we shared the same star sign-Aries. She enjoyed staying indoors playing video games than going out. I got her number with a promise to invite her out the next day and since then we had been inseparable.

****
Months have gone by since that day in May and as I stare at the Spring themed pre-wedding photo of her and her fiancé on my phone, I realize that as hard as I have tried, I still feel a burning desire for her. But with any luck, time will quench whatever lit ember remains, even as I make an effort to stop torturing myself with thoughts of what could have been.

Jemimah-Nikky Jates is a Mass Communications graduate and a Public and Media Relations Consultant- specializing in Strategic Communications and Reputation Management. She writes short stories and feature articles and has ran a Human interest Blog for 4 years. Blog site : http:// jemimah-nikky.blogspot.com ‎Contact her via email: [email protected]  Twitter/Instagram @nikkyjates