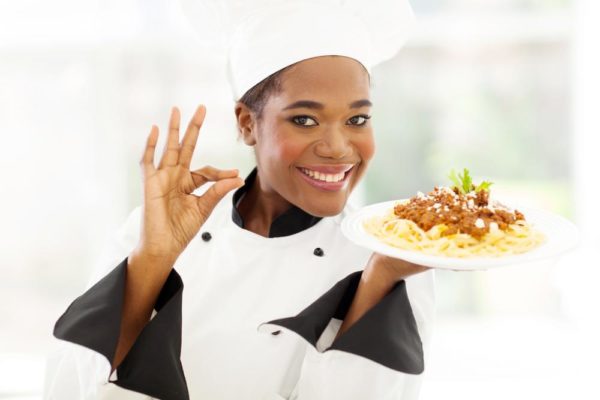 I went to Whitehouse Buka in Yaba, Lagos recently and I ate Amala and gbegiri and ewedu with goat meat and cow tail and a bottle of coke. Yes, I know, I gorged myself. But I felt good and I took my time enjoying this food.

By the way, White House Amala is not the best I have ever eaten; it was one I had in Sokoto that beat this record.  I think the satisfaction came from the going back to my roots feeling.

Anyway, in settling back to savor this meal, I started watching the cooks and since I had the idea for this write-up in my head already, I wondered if these people were chefs since the meal I had eaten in their establishment was great. I mean should that not be the aim?

What makes a great Chef? Why should we call anyone a chef instead of a cook? What does it entail really to be become a chef? Is it a function of education, experience or “packaging”? (This is a lot of what I see in the Nigerian food scene and which also inspired the write-up) In trying to research for this article, I asked a friend on what his thoughts were and he said he in a nutshell that anybody who cooks professionally can be called a chef. He believes even the women who cook for parties can be called chefs (in Yoruba, we call them “alase”). I totally disagreed of course; but then I realized he won’t be the only one who has this mindset and therefore it’s important to make the distinction.

According to Wikipedia, a chef is a person who is a highly skilled professional cook who is proficient in all aspects of food production. This definition is pretty self explanatory. A true chef, even if you are a pastry chef, has to have an idea in most if not all of different types of food.

A chef should be a sum of the following:

Education
Now if you have the big bucks to attend a top culinary school, then by all means, you are almost halfway to being a great chef. These programs have everything (or most things) that will equip you to be a great chef. There is also nothing wrong with having a great “pali” – certificate. Na your money kill am. It’s a good pedigree that anyone should be proud to have; and in life, you need all the advantage you can get.

In Nigeria, I doubt if we have world class ones (I stand to be corrected though). I know a lot of what we have are catering and hotel management schools. This in itself is not inferior education per se; as long you know what your long game is and you don’t stop learning. Even if it’s getting short courses from abroad, the bottom-line is that you have to invest in your education to become a chef.

I think it’s also important to note that an education in a top culinary school doesn’t guarantee financial success. Jamie Oliver, the English chef (the man behind the #Jollofgate brouhaha) never went to a formal culinary school, although he worked his way up the ranks in different kitchens. Today, he is one of the most successful English chefs with his cooking shows, cookbooks and cookware.

Expertise/Experience
I believe this is the most important component in the making of a chef. You should have proven your mettle in some tough kitchen or situation for us to acknowledge you as a chef. In Western countries, getting a fancy degree doesn’t automatically qualify you as a top chef or to head your restaurant (except you come from money, and that is still risky). You would have to be trained under a great chef, have the very humbling and sometimes degrading experience and prove your worth. I heard a chef talking on the radio once that she went to Europe to train under a gifted chef and she had plates thrown at her and lots of swearwords to accompany it all because she wanted this man’s tutelage. I hear Hell’s kitchen, the show with Chef Gordon Ramsay, is actually how some European kitchens are run. You have to have nerves and backbone of steel to survive and triumph.

In Nigeria here, there are very talented people who have worked under Caucasian chefs for years in hotel kitchens and are not recognized. Now this can be quite sad because some of them have been well trained and are gifted, but have no money or backing to own their own restaurants and be recognized as chefs. But on the other hand, some people get this experience and then begin a small scale business with no imagination or creativity.
I personally know a church member who worked at Golden Gate restaurant for years and when he left, he started a small chops catering business. This seems to me like a waste of experience, but like I said earlier this is very individual in execution and this could be his passion.

There are many self trained, self taught chefs but they paid their dues heavily. Chef Martorano is an example; a poor Italian American kid who grew up on the streets and now owns several restaurants across America. So for anyone out there who has Chef dreams and does not have the money for the education or opportunity to train under a great chef, do not give up, there are a million ways to acquiring the expertise.

Career
The totality of your career (resume) or your journey in the culinary world is also an important component in the making of a chef. I admire Chef Fregz’s culinary career( if you ever read this, know I have a huge food crush on you), I first saw him on Studio 53 extra years ago when he showed us how to plate a dish of eba and seafood okra and from there I was like who is this and through a great PR strategy, he is becoming a brand we can easily identify with great food; even with his Cordon Bleu education he didn’t just open a restaurant and paste this “pali” on the wall and so everyone should come and eat his food, I like his approach.

Now every budding chef can’t be this way but it’s important to study the careers of chefs you admire and aspire to be like and have a long term strategy to bring this to fruition.

Reviews
Reviews are very powerful in making or marring a Chef’s career. In Nigeria, it is not so popular yet. What we have are mostly restaurant reviews which I guess is also a reflection of the chef’s work I guess. But it’s not exactly a determinant of whether you will go the restaurant or not.
We have bloggers who chronicle their food experiences of different places to eat. I like the folks at eatdrinklagos.com; I like the tone and critique of their website.

In the western world, reviews are a major bane of their culinary world. Food critics are revered, feared even. If you become a MICHELIN STARRED chef for example, it is a big deal. This automatically guarantees a level of success. Even a big shot chef like Gordon Ramsay said it hurt him deeply when he lost a star in a list published.

I was arguing with my siblings once that if I must go to a fine dining restaurant and part with my hard earned money, it is important for me to know who the chef is and his/her pedigree. A review will help me in making this decision; but sometimes, food critics are not really objective and sometimes seek destruction of the chef’s career. If this happens, I believe the chef must take it in stride and keep being the best he/she can be. The work will speak for itself.
My siblings said it doesn’t matter… so far the food was good and the ambience was nice. I guess to each his own, but a Chef will be reviewed by some expert of food lover in the course of his/her career, the fame it garners can’t hurt anyway.

SO WHAT IS THE DIFFERENCE BETWEEN A COOK AND A CHEF?
It is a thin line in distinguishing the differences honestly. Cooks and chefs both do it for the money. They can get very famous e.g. Rachael Ray and Nigella Lawson (who both claim they are talented cooks and not chefs), have very long and successful careers. I believe a chef must love food, be a good leader (it’s not a joke coordinating so many cooks and delivering great food), extremely passionate about his/her work, extremely talented and gifted, supremely inventive and must be ready defend that chef title any day anytime.

What do you all think? Love and Chocolates.

Nicole the Fertile Chick: I Married as a Virgin But I Can’t Conceive