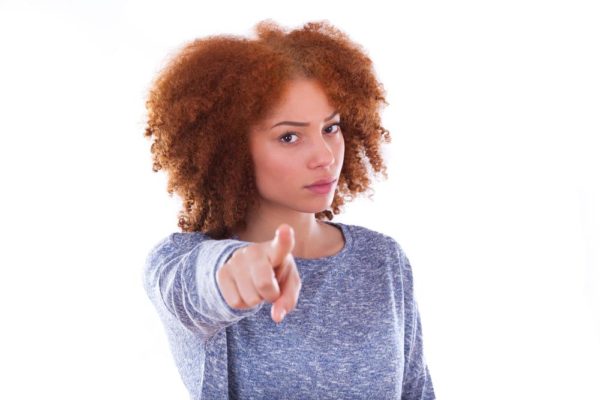 It seems like to be female in Nigeria is to be the butt of jokes. I had put off writing about this for a while, but after the hashtag “BeingFemaleInNigeria” recently took over Twittersville, I decided it was time to hit the nail on the head.

I’m sure you’ve all seen those comedy show adverts which I now loathe. These comedy show ‘ads’ are nothing new. It’s been the norm for so long that I don’t even remember when I watched the first one. You know what I mean na, those adverts that begin with a ‘sexily’ dressed babe that during the course of the ad leaves her broke boyfriend for another who is financially better off.

At first such ads were sort of funny, you couldn’t help but laugh at the boyfriend’s plight and sigh at the girl unabashedly leaving her partner just for better material prospects. Usually, once such scenes end, the ad cues in the standard booming voice letting the viewers know where the comedy show would be taking place, tickets prices and where to purchase them from.

But my people, please tell me, at what point does it become one joke too many? Really, how many times can we laugh at the same old joke? Or how long will it take for us to realise that stereotyping females in such ways ain’t just cracking it?

If not the sour taste of the subtext of such adverts, even the lack of creativity is appalling. Na since nineteen gbirigbiri wey we don dey watch the same adverts to go watch comedy show. Abeg, Mr comedian, you can do better.

You might be wondering what has brought about this outburst, so let me explain myself. I was scrolling down my Facebook newsfeed one afternoon when I came across a video a friend had just shared. The title of the video was unsurprisingly sensationalised and due to curiosity, I clicked the play button and what ensued left me disgusted. As usual, it started with a lady and her man. In the video, she had asked him for a huge amount of money(I don’t care to remember the actual amount) but he could only afford to give her 15k and she was very displeased and demanded for more because the money wouldn’t be enough for what she needed it for. A minute later, the scene cues in a guy driving an expensive looking car and the drama that followed was ever so predictable. The guy rode past the babe and her boyfriend and overheard her insulting him for giving her just 15k. He then asked her what she was doing with such a cheap guy and told her that she could do better. What next? He offered her a ride and she jumped in, leaving her boyfriend in dust as the car sped away.

As expected again, while in the car he sweet talked the babe and got her contact details, and then moments later, he drove into an impressive gated community, and of course the babe was impressed and fawned over him. However, he parked the car in front of the gate of one of the houses on the street and the owner of the house came out to attend to the guy. During the course of their conversation, I, as well as the babe who was easily listening in on the conversation because the window was wound down, learned that the guy was only a mechanic repairing the car for the house owner. As the guy rounded off the conversation, he promised to return the car once it was fully fixed, and then returned to the car. Immediately, the babe jumped out and started to accuse him for not telling her that he was a mechanic and that the car wasn’t his. Again as expected, the guy began to insult her for leaving her boyfriend and driving off with him. Then I heard the cued laughter from the “audience” and then the scene cut into the guy directly facing the camera to give information about the comedy show and other details.

As the video ended, I couldn’t even laugh at what I had just watched. Not because I made an effort not to, but because of the realisation of how pointless and vile the content of the video was. It left me thinking: ‘how long will women continue to be the butt of these types of jokes?’ Can these so called comedians not come up with any other material to advertise their shows? When will the subjection of the female folk to such stupid stereotypes as the average Naija babe end?

I’m not naive enough to think that such babes don’t exist, but when these are the only types being pushed by our media, what sort of portrayal then are they making of Nigerian females?

Not all Naija babes will date a guy for his money, and moreover there are other “types” of females they can portray out there that gives a positive reinforcing image of Nigerian women. All these simplistic stereotypes have been over flogged, and simply put, are lacklustre, demeaning and not funny. We are tired of the same old scenes and plots.

Mr Comedian, please get over yourself, because we’re over it.

Nneoma Obialo: Accepting Who I Am