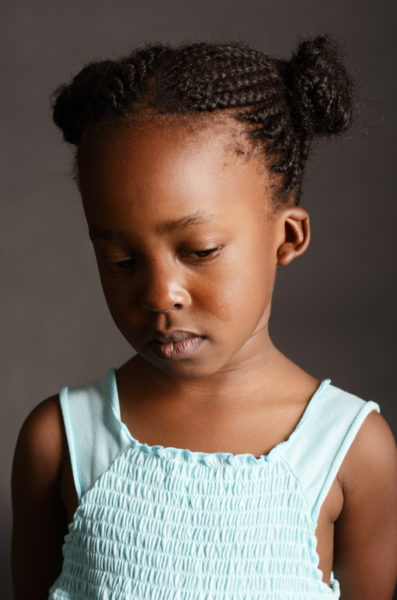 As I stood on a stool peeping out the window, I saw Aunty Katherine flanked by papa and mama on the bench at the back of the house. Mama was looking into Aunty Katherine’s face, while Papa was looking straight ahead. It was in this position that the decision concerning my life was taken. I heard mama ask: Sister Kate, you have three daughters, why do you need my daughter to come with you? Aunty Katherine replied: Mama Blessing, it is true I have three daughters, but all of them are in school. The last one is leaving for school too in the next two weeks. I need somebody to stay with me in the house – someone I can talk to and would help me do some house chores.

Mama asked aunty some more back and forth questions which she answered. Papa cleared his throat and spoke up: Katherine, you know I can take care of my family to the best of my ability. Even if I do not have in excess, I do not go around begging. I’m a comfortable man and I’m very content that way. The child you’re asking me to give you is my last child and a very precious one to me, she’ll forever remain my baby no matter how old she grows. I’m releasing her to you because of the relationship our families share. Please take good care of her.

Aunty responded: You have nothing to worry about. Thank you sir.
I packed my bag excitedly that night. In my heart I thought, no matter how much of everything I wanted was given to me by papa, Aunty would do better because she has more money. In fact, I couldn’t sleep.

We left for Auntie’s place early the next morning. The moment the car drove through the gate and I saw the beautiful house, I began to imagine how beautiful my life would be in it. My life would even be more beautiful than the house.

Auntie’s voice changed immediately we got into the house, and I thought it was the stress of the journey. I was told I’d be staying in a small, dark room – packed with stuff. I didn’t think too much of it; I only wondered why I wasn’t allowed to stay in the same room with Maria, Auntie’s daughter.

My first major surprise came that evening when Aunty asked me to go and prepare a pot of egusi soup. Everything you’ll need is either in the drawers, cupboards or refrigerator in the kitchen.

I was lost. Though I helped my Mama out in the kitchen, I had never had the responsibility of preparing a whole pot of soup. I concluded Aunty had forgotten I was only 10 years and a few months old. Maybe she forgot that it was her daughter Maria who was 17 years old.
I made the mistake of asking her if she was talking to me or to Maria. The question earned me a ‘clarifying dirty slap’ with the statement, you think I’ll send my precious daughter into that kitchen to have that heat spoil her skin? I had the bad luck of having a quick tongue, “am I not precious to you”

This earned me a snarl; Who are you to be precious to me? Do I look like your mother? Go into that kitchen and prepare me dinner before I cut that tongue of yours and feed it to you.

Wondering how she was going to do that, I walked with resignation into the kitchen. Maria wasn’t going to join me, and I was getting no form of physical or moral support. That day, I successfully prepared independently my first pot of soup, and it didn’t taste so bad I must say.

After some days, I adjusted to the fact that my one decade and a few months old life had taken a new turn. I had to wake up at 5:30 to clean, scrub, wash and cook. I always wondered where the dirt came from considering we were just three in the house. I learnt to reduce the pace of my rather fast tongue so as to reduce the number of hits I’d get in a day. I was expected to know all and do all at my little age because I was from a managing family, while Maria was excused because she was from a wealthy family.

I got injured almost on a daily basis. Unfortunately, most of those injuries were at the same spot, reopening the ones already healing. I even got burnt “mistakenly” with a hot iron by Aunty because I “mistakenly” burnt her expensive lace material which I had already said I couldn’t iron. I began to grow lean.

Whenever my parents called, I was always unable to tell my predicament because Aunty was always there with that, ‘don’t try any rubbish’ look. I prayed earnestly for

Aunty bought me long clothes to cover up the scars, but the ones on my face could not be covered. People on the street always had a look of pity on their faces for me, like they knew what was going on in my house, but they never spoke up or reported to the authorities. One person asked me if I didn’t have other relatives I could live with. In my usual fast response mode, I told him I have parents. He didn’t believe me. He even said Aunty brought someone younger this time so she wouldn’t be able to run away. I was going to try to convince him that I had my Papa and Mama in my hometown, but then I remembered the drying saliva on the floor and that I was running out of time.
Visitors came all the time, but I never got to have any conversation with them; not like many of them were interested in a conversation with me. I was always expected to be covered from head to toe. I’m sure, if there was a way Aunty could have made me wear mask, she would have. There was a particular woman who always came visiting with another woman, I noticed she and Aunty were not best of friends, but she always made it a point to say hi or respond to my greeting.

One day when Aunty and the other women were engrossed in a conversation, she slipped into the kitchen and began to talk to me. At first I was too scared to reply because of auntie’s threat and how was I so sure she wouldn’t go back and report the whole conversation to her?
She told me she was a lawyer and an activist (though I didn’t know what an activist meant then), that I could talk to her. I realized she might be my only escape route from hell. I decided to take the risk and began to pour out everything. She told me she was going to help me. Some way somehow, Aunty found out and I got the beating of my life. I landed in a hospital.

The house I excitedly went to expecting a bright future became my darkest sunset. I hungered for the peace and quiet derived in all the paying and noise making in my house.

I heard Aunty was taken away by the police, but not before Aunty Lawyer made her provide for all my expenses. I saw my Mama and Papa’s face and tears began to flow down my cheeks. My Mama joined me, but my Papa was being a man.
Aunty Lawyer was saying what Auntie’s punishment would be, but I wasn’t listening; I was too happy just seeing my Mama and Papa.

Everyone could see the outer scars on my body, and wondered how someone could be so wicked to do such a thing to a child like me. But nobody, no one could see the scars in my heart, my mind, my soul and spirit at such a young age.

Shout out to all the people who still believe in George Orwell’s animal farm theory that “all animals are equal, but some are more equal than the others” thereby treating other people like trash; your day of reckoning is coming.

‘Tale Alimi: Step Out of Your Comfort Zone! 5 Tips for Business Growth

Toby Nwazor: My Experience with the Vampires Called Lagos Mosquitoes