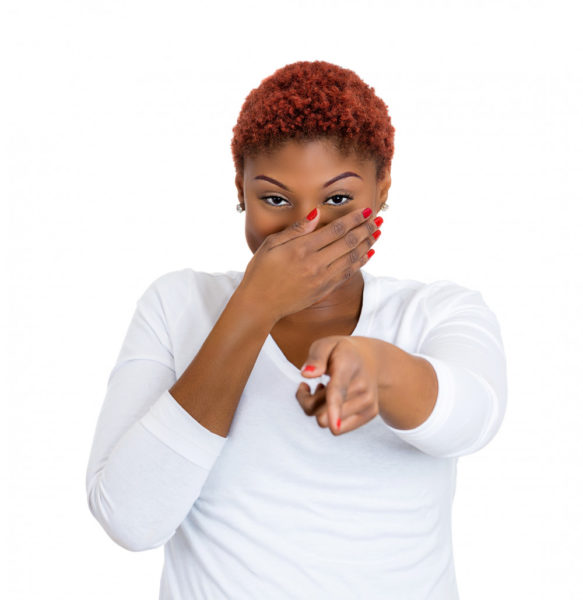 Being a public figure in Nigeria requires one to be thick-skinned. Like bokoto that just would not go tender when the heat is on. A life of celebrity in our dear country is a calling for those who strongly desire fame, adulation and fortune, above the scrutiny and invasion it brings.

Trolls (see definition below) have been winding up celebrities, since the days of Mungo Park. Let us start with 1995.  Video jockeys Keke-Kenny and D-One used to host a music request call-in program on Raypower. This was during the “It is a Fubu, mehn” era.

A listener called in, garnishing the hosts with faint praise “I like your show. You two remind me of my two favorite American acts…”

“Thank you o. Which ones?” Keke inquired, with a prodding eagerness in his voice.

The radio duo retaliated with curses on the mischevious caller, and then cut him off, as the program went to paid adverts.

Years later, there was a night-time movie program on DBN TV channel called “Night-Shift”, where callers could nominate a movie out of a line-up which was then aired based on votes. It was a very popular program, as the movies showed were new box-office hits, and it was either that or a struggle to find that movie to rent at Video-Mart. Some new blockbuster movies required “man-know-man” connections before you could locate them for rent. So the “Night Shift” was a welcome alternative.

Some mischievous callers made Eva and Galilee’s work hellish.

One criticized Galilee’s ankara shirt, and safari suit fashion choices on live TV, causing him switch to up the next day. He looked crestfallen the next day.

Another caller tried to chat up Eva on live TV too, by telling her she was kinda cute and asking for her phone number.

Then another day, a caller phoned in. He was trying to get fresh with Eva, but she stayed professional, and started outlining the choice of movies: “We have a nice line up today. You have a choice to vote for one of the following movies: Armageddon, Con Air, Face/Off, Air Force One, Enemy of the State. Make your choice..”

The caller’s choice was exact “You.”

Trolling in the context I am speaking about is sending a barb in a public forum to a public figure, with the intention to ridicule, humiliate or draw the subject into an unsavory reaction. Some trolls get a kick out of getting a rise out of celebs. These days, it is more usual on the internet, and is a virtual form of winching someone. It is the physical equivalent of poking an animal at rest with an electric prod. Unwell-wishers from your village send otumokpo, or jazz your way if they are not pleased with your stature in life.  Trolls send an electric electronic comment to your Instagram page or a Tweet fit for a twat.

Trolls used to do it in person, back in the day. I was once a show at Lagbaja’s Motherland at Opebi Ikeja where comedians were performing. One guy from the crowd tried to heckle Ali Baba, the grand guru of Nigerian stand-up comedy when he came on stage, by yelling “Baba, abeg go chop shit jare! You no funny!”

Babanla mistake of life. Ali Baba faced him squarely, and finished him with yabs. The heckler was soon moved to tears, and even the crowd pleaded on his behalf, like “Ali , e don do, abeg leave am” I muttered under my breath “Ali bomaye”

With advent of online forums, the widespread use of the Internet, and the popularity of smart phones (which makes some people do un-smart things), almost anyone has access to online media content. At the drop of a hat. Or at the re-charge of a phone. The flipside of that is that everyone is seeing everyone, everywhere and in every way. Celebrities or those in the public eyes are just one “iPhone send-button” away from a reducer, an insult or unwarranted criticism from viewers operating under the cloak of anonymity or from a social media account created just for that sole purpose. Sometimes an amebo who knows the celebrity personally may choose to reveal their life-story on a social forum even though the celeb has not appointed anyone to commission an official biography. And boy do we lap it up. Stories of alleged runs-girlism, or adulterous rumps or bankruptcy are shared about the public figure, some of which are frivolous at best.

Anyone with WiFi connection could tell you what Buhari wore last week, or how many Boko Haram fundamentalists were slain in a counter-attack by the Nigerian Army, or where Tiwa did her baby shower, and the amount of grains in each sachet of the Koko Garri D’Banj launched last year, You get the feeling that some people set out to trip up those in the public eye. It is a sport, and you need not show your face.

And celebs react in different ways. Some face their detractors head on, like Sallah rams at war. Some ignore the trollish behavior. Some seem to court it, as infamy is still a form of fame. Like the fire needs the air, I won’t burn unless you are there.

A certain mixed-race TV presenter whose first name rhymes with Oleku, has to be the most dignified celeb in Nigeria. Oleku put up a photo of herself on Instagram and one abuser criticized she had no breast and no bakassi. Her response was dignified like “Really bruv?” It was uncalled for – just like flashing someone

Other celebs react like a cornered catfish if you drop a bad comment on their social media page. One famous video vixen whose first name rhymes with Sunita really dishes it back immediately with blind fury like a blindsided buffalo. Like, your papa! She does not hesitate to decend into the arena if a follower tries to come at her sideways.

If it is a criticism of their professional work, then maybe it is fair enough and should be aimed at them at their area of operation ie a stage, football pitch etc. If for example leave a comment on his Instagram page that, Dr Sid’s “Chop Ogbono” tune has no draw (no pun intended), is that taking it too far?  On the flipside, if you complain about the way Davido screws his face up when singing, like he is trying to extract juice from a dry orange, is that a legit criticism of his craft, or does that go too far? Is a celeb fair game for any kind of verbal attack, since it is part and parcel of their profession? Personally I feel it is putting bad karma out there.

Maybe it is best to have a therapy session in the comments, where we let it all out for all posterity.

Anike Afolabi: 5 Principles To Teach Your Child Who Has Made a Mistake