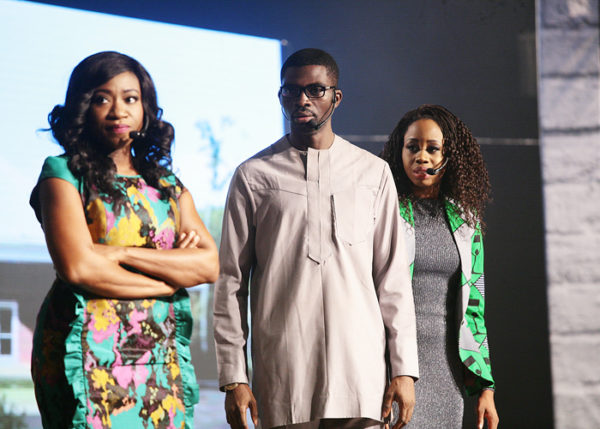 I knew by the long line of cars in front of MUSON Centre that many people in Lagos also thought that seeing ‘WAKAA, the musical‘ would be a great way to spend their Sunday afternoon. My friends had seen SARO, another musical by BAP Productions, when it premiered the year before, and by their raving reviews I knew I was in for a good time. More exciting for me was the fact that Bolanle Austen-Peters was piloting this. I was faintly familiar with her work in the Arts in Nigeria and at TerraKulture, so I was sure that I wouldn’t be disappointed.

My ticket was for the penultimate show, by 3PM on January 3rd. A large crowd was milling around the Shell Hall, the venue of the musical and the air literally buzzed with excitement. When the doors opened at past 3, we shuffled into the hall.

Bleachers had been added to the back of the hall, to give a raised, amphitheatre-like appearance. My friend and I made our way to the front of the hall, searching for the perfect seats that would help us catch every word and every movement. Seats found, we sat back and waited to experience what was going to be the highlight of my holidays.

By the end of the show, I had one word on my lips that I repeated again and again – AMAZING!! I’m not going to give a review of the play – you have to watch it yourself next time it shows! But, my head was spinning with delight at what I had just witnessed and I immediately began talking to my companion about the lessons I could draw from my experience.

Excellence Is Not A First-World Privilege
I have a background in the Arts so I could be eagle-eyed at creative events like this. However, I was blown away by the masterpiece that I saw. The creative use of contemporary and ‘old-school’ Nigerian music, the development of the characters, the right use of lighting…I could go on and on! Excellence has an unmistakable voice, and I heard it loud and clear while watching WAKAA.

We often complain about how difficult it is to do business in Nigeria or to get certain things done on a world-class level. Watching WAKAA thrashed that argument. I dare say it was a world-class performance. It may not be easy, but it can definitely be done. Mrs. Austen-Peters stands as a witness that it can be done.

It Takes A Village To Raise A Child
We celebrate Bolanle Austen-Peters’ dream today, but I dare say that it would not have been easy to materialise without the help she got from the cast, crew, friends and organisations who supported in one way or the other. The back drop at the red carpet area was filled with the logos of the plethora of companies that saw value in the vision and pitched in. She acknowledged a number of these vision-helpers in her vote of thanks as well.

As you travel the path to fulfilling your dreams, be mindful of the relationships in your life. Invest in people. Acknowledge and treasure those who bear your vision with you and labour along with you for its fulfilment.

Consistency Has A Big Pay Day
When Mrs. Austen-Peters started on this path in 2003 with the establishment of Terra Kulture, I wonder if she knew that her name would be mentioned when speaking about Arts and Culture in Nigeria. I’m so sure that if she had told someone then that a time would come when Nigerians would pay a minimum of NGN5,000 and as much as NGN50,000 for one ticket just to watch a stage play, they would have laughed uncontrollably and called her names. See who’s laughing now!

Whatever your dream is, without consistency, it will probably never see the light of day. Everyone with a success story also has chapters of tears, disappointment and failure(s) in their tale.

Mixing Business With Pleasure Leaves Everyone Happy
A problem many artistic people face is finding the balance between their creative, artistic side and making the numbers add up. If the numbers do not add up, the show cannot go on. A good mix of business and marketing strategies can be the kiss of life to a creative project. The hall was filled to capacity that day; that means that about 1000 people were in that hall. Someone did something right!

I definitely will see WAKAA next time it shows and I will take as many hostages as I can along with me! I guess that’s another lesson – Getting customers emotionally invested in your business turns them into your brand evangelists!

When Sharon-Ann is not training on Diction and Etiquette, she can be found crafting words at Stratum Pages, an editorial and content development company. With a Master's Degree in English, she has interests in the Arts, enterprise, technology and personal development. She can be reached on [email protected].