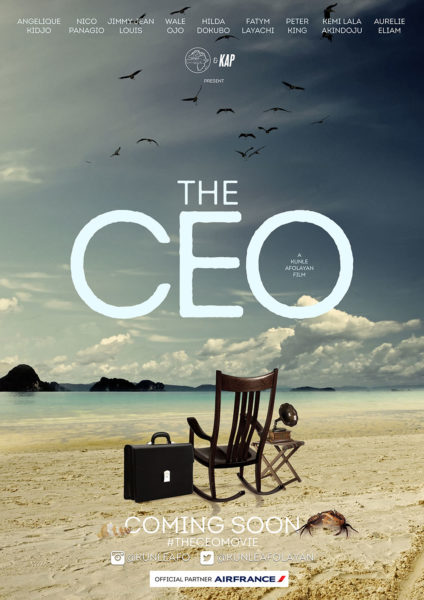 Ok so yesterday, I took my pretty self to the cinemas at 8:30pm to see Kunle Afolayan‘s “The C.E.O”. I can think of a million other things I could have been doing at 8:30pm but it’s Kunle Afolayan so I’m thinking, yeah, this should be worth it. Mind you, I paid full weekend price, popcorn, the works. I like being completely armed so if I don’t enjoy a movie, it’s the movie’s fault. No excuses.

Now, let’s begin with the pros, you know, because positive vibes. The picture quality was good and there were a lot of scenic shots. They made great use of the beautiful ocean scenery and natural light. Loved it. The set, of course, was great (I should have led with this.) Most of the movie was shot in Inagbe beach resort, a really great spot on the outskirts of Lagos. There were a few scenes outside Nigeria as well. The entire production was great; location, casting, et all.

Something else I found really impressive was the dialogue. Tade Ogidan did an excellent job there. I’m always particularly interested in phrasing and diction, and I was not disappointed at all. There were little or no signs of struggle in the back and forth. It’s important to pay attention to all the nitty-gritty of a screenplay, which is something Nollywood movies have shown to lack, so I really appreciate Afolayan’s effort in keeping it clean.

It doesn’t end there. I’d have to give props to the team on appropriate casting. Wale Ojo is always a good choice. The man is just a delight to watch and whatever fitness regime he’s been on is paying off nicely cos that body looking really good. He gave us that sexy sugar pappy vibe playing Kola Alabi. Give me a sugar daddy with ambition and heart any day. Also make sure that bank account fat cos what’s the point if not, right? But, I drift.

Though I was just introduced to a few of the other actors, they showed professionalism and such a wealth of experience that was a delightful relief. Many times, when Nollywood decides to cast non-Nigerian characters they pick the first one they find and call it a day. The result is always a ludicrous mess but it’s good to see the effort put into bringing the best performances.

Still on the casting, I think the most impressive performance, in my opinion, was Nico Panagio as Riikard Van Outen. No, not just because he’s one sexy slice of vanilla; he’s also a great actor. Facial expression for days, body language for years, the man set out to, as they say, killummmm. I, and my ovaries, were mighty impressed. Fatym Layachi and Aurelia Eliam both brought their A-game as well. Oh, and Angelique Kidjo. With charisma like that, it’s hard to find any faults with the music veteran’s performance. Ugh and all that sexy french. Mon dieu!

If I’ve learned anything from Kunle Afolayan, it’ll be the fabulous delight that is a multi-lingual movie. They don’t say variety is the spice of life for nothing, you know.

It’s important to note the classy way product placements were inserted during the film. Driving a Peugeot in the opening scene (Peugeot is one of the official sponsors), flying with Air France (also an official sponsor), nice touch. Even premiering the movie first on an Air France flight was also a sweet move. I love where Nollywood is going business-wise. It’s important that brands take advantage of the movie audience by partnering with movie producers for in-film product placements. Who knows just how many people would patronize Peugeot or fly Air France after “The C.E.O” goes mainstream. *shrugs*

I enjoyed watching “The C.E.O”. For a largely conversation based film, it was surprisingly entertaining. I’d never have thought Nollywood could pull it off. When Hilda Dokubo (who played the police inspector) said, “Seat your nyash down”, I felt myself sink in slightly deeper into my seat. Oh and the sex scene between Kola and Eloise (played by Aurelia Eliam), whoot whoo! He threw those legs in the air! The angle of the shot was good; conservative enough for Nigerian society *insert extreme eye roll*, yet passing the message across. And it was a rather *cough cough* interesting message. I’d give enormous props for believable performances. When great casting, a nice tinge of panache and topnotch cinematography come to play, what a fantastic soiree that could make! But, I hate to say, the movie did lack a certain je ne sais quio. I say that but what I really mean is this; it had a rather disappointing ending.

Kunle Afolayan has shown to have a thing for the darker side of life. You know it’s Kunle when there’s an unexplained murder and a plot twist waiting to happen. Before now, he has managed to clean up nicely, tie all the knots and give us a befitting denouement. Which is why it’s rather surprising that in what was intended to be a career defining moment, we were handed such a weak cessation. I’m always very critical of murder thrillers. To me, if you’re going to kill people, make damn sure you tell us why. If the motive is not convincing enough, it could mess up the entire story. Many guilty people have walked away unpunished because the prosecutor could not whip up a convincing motive. No one wants a murder without a proper, “why”.

It’s difficult to accept that two top company officials were murdered in a C.E.O hunting programme and the course was not discontinued. Ok fine let’s say that happened, at least give us a solid reason behind the murders, not just some feeble tale. Hey, I love an ambitious Chinese business man tale as much as the next guy and I can sincerely see what they tried to do there, but this is what makes a bad film; struggle. If the story does not flow, dead it. Rather a simple clean story than some complicated mess.

Remember when I talked about believable performances? Well, not entirely. Kemi Lala Akindoju is a great actor in her own right. But her performance as Lisa, the mole and murderer, didn’t quite do it for me. Never seen a person wield a knife so comically. I literally laughed out loud at the hand-to-hand tussle between herself and Kola towards the end. Looked like a joke, really. Ah mean, but a wah di rass! ef you’ve deliberately killed two bloodclaat smadi, yuh should know ou to wield a knife. Gwey!

Okay, happy thoughts and positive vibes. It really was a good film. Just wish it cleaned up better.  But hey, I could give it a second watch and see how that works out.

You know, somewhere down this little singsong, I intended to count down to the last T, spelling E.C.C.E.L.E.N.T but life happens. If you haven’t seen “The C.E.O” you should head down to the cinema and do that. And if you’re going to get a DVD, please do buy a certified copy.

Chioma Nnanna is a writer, video blogger and media pundit. Her work has been published with Aphroden,The Naked Convos, Brittle Paper and various other platform. She is the owner of promising movie blog; www.notinkansasanymore.tv as well as a connecting youtube channel. She loves music and film and is a pretty decent singer. She sometimes sings with a band in Lagos for fun but looks to begin writing music for a living. You'd likely find Chioma at a cinema drowned in popcorn or in a bar downtown sweating it out; or really, just at home in embarrassing clothing.