The southern Nigeria state of Cross River used to be known as an area with some of the oldest tropical rain-forests in the West African region, with mangrove swamps on the coastal zones and some of the rarest species of organisms to boot. However, that reserve is being threatened including the famous Cross River National park, Ukpong and Ekuri forests identified as a biodiversity hot spot. 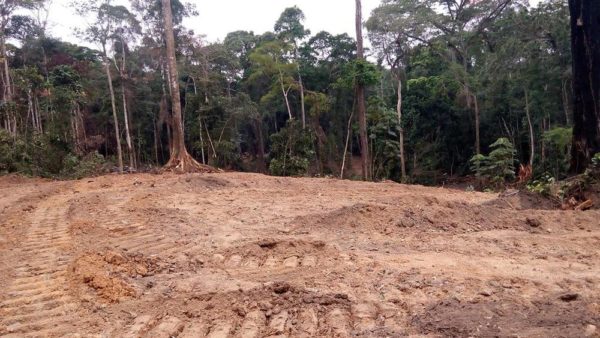 This is because of the planned construction of a high tech super highway from Calabar, the state capital to the neighbouring Benue State, through the forest. Complete with anti-slip features, speed cameras and Internet connectivity, it would cost the state a whooping sum of $3.5bn.

Beyond that, there are the implications directly and indirectly for thousands of families and their livelihoods.
50-year old, Alice Bassey sat on the trunk of a felled tree while talking to me, her eyes fixed on her visibly cracked building – on the outskirts of Calabar, Ikot-Opkoene Akpabuyo community – originally owned by her parents and passed down to her immediate family. She was flanked by her kids, as she described how the wall cracked the same night men acting on the instructions of the state Governor, Ben Ayade, invaded her community with bulldozers.“I was sleeping when we heard the trucks (bulldozers) clearing all the economic trees, my only means of survival”, she reminisces. “I don’t have where to move to, they want to take my land, without notice, this house as you can see the demolition marks, has been revoked.” 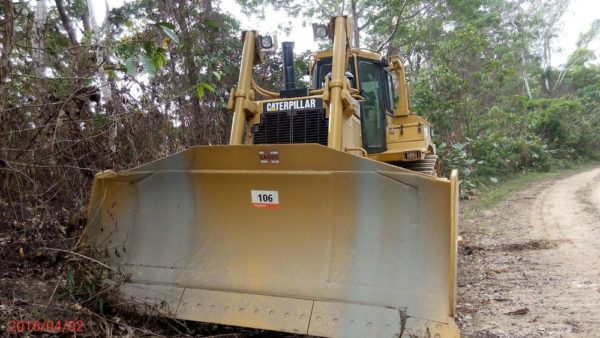 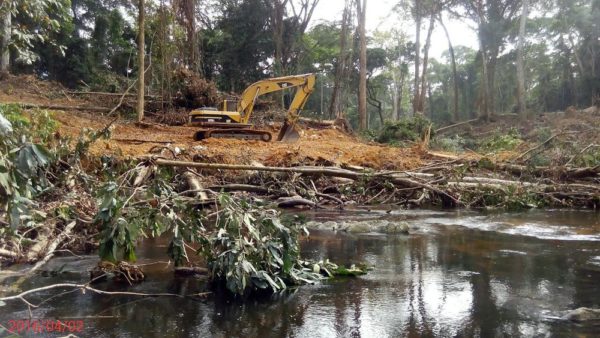 On 22nd January 2016, the government published a notice in the Weekend Chronicle, a local newspaper announcing the revocation of all land occupancy titles within a 20-kilometre wide corridor of land along the highway route. This revocation means that government has acquired all farmlands, forests and even houses owned by the communities.

Bassey and her kids are helpless, their means of livelihood destroyed by a government elected to make life better for the citizens. “At no time were we issued a notice. The actions by the authority remains shocking”, she sobs, pointing to the debris of trees she claims had been in existence for over 150 years. Since the destruction of her cocoa, palm trees, guava, mango, and orange trees, the only means of survival for her and her six kids, they have had to rely on friends and families to eat.”

The invasion of his community has left Elder Okon James Ukpong, 76, who I met in downtown Ikot Ndareke, stranded.

Asked if he was willing to move, as his home had the demolition sign from the authorities, the unperturbed senior citizen said, “I am not leaving, they’ve destroyed my means of survival, and I am waiting for them to come for my house, so I can die with the bulldozer that day.” 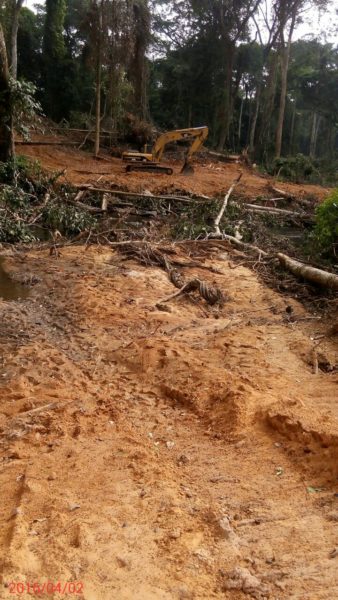 During the interview, he would wonder aloud why the government was insensitive to the plight of the people – repeatedly questioning why over 50,000 people will be displaced, and most of them without prior notice.
***
Environmental Impact
Umo Isua-Ikoh, an environmental activist working with the group, Peace Point Action (PPA) a local NGO in the state condemned the demolitions, saying there was no due process followed by the government. In a clear contravention of the act, the government has however, started clearing forests in Bakassi, Boki, Apkabuyo, Obubran, Akampka and elsewhere.
“Over 185 communities were affected”, he emphasizes. “The EIA act of 1992 states that no land clearing should take place without Environmental impact (EIA) assessment permit from the federal government.”
The government seems to be dismissing all the concerns though.

Governor Ayade is widely quoted to have said Cross River has “over one million hectares of pristine forest and that forest which is an asset that has remained unexploited and this forest has been conserved over time without exploitation. That is not the way we are going to go forward, we are going to move from forest conservation to forest management; which means we are going to be needing 2000-3000 young men who will be responsible for regeneration of forest. As we are deforesting for development by processing it into ply wood and vinyl for export, we are also correspondingly investing hugely for regeneration.”

In the fact sheet made available by environmentalists and scientists to the press, the state has much less than 1,000,000 hectares of forest – perhaps only 600,000 are standing.
“The existing highways, if refurbished, could fulfil development needs without loss of any forests, and at a much lower cost”, the document reads. “The existing highways have an established system of feeder roads, linking communities to the trade route – The proposed super highway would likely cause the construction of its own network of feeder roads, and thus cut a grid of smaller roads into what is left of the rainforest – This slicing up of intact ecosystems would severely affect animal migration, and the gross loss of habitat would further threaten their survival – Sustainable human use of non-timber forest products in many areas would be eliminated. Nigeria would lose its REDD+ status.” 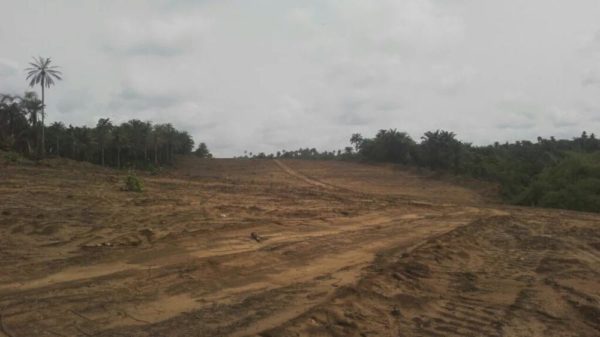 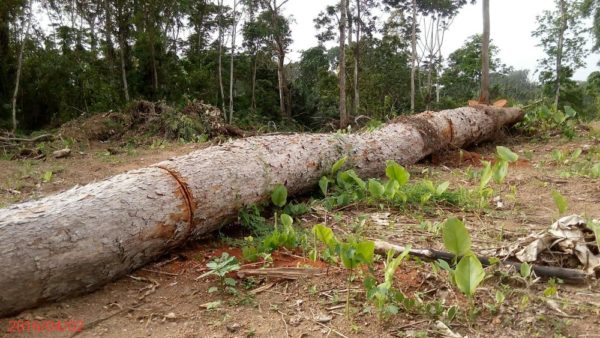 From the interactions in the affected 7 communities visited, it was clear that notice of revocation of land rights was not widely publicised and many individuals affected never knew about it; thus, no prior consent was sought from the communities.

Compensation and Demands
Ekpo Abasi, 37, tells me he has no problem with a government that seeks to construct roads for the people but questioned why his land ownership had to be revoked overnight without due diligence.
“We need roads but not this level of expansion, and the governor should restrict himself to the highway act – and I need to be compensated, I can’t just be asked to leave, leave to where?”

The GREENCODE movement is another NGO liaising with the people and the state government, over the superhighway project, led by Comrade Edem Edem. The group is demanding that the government stops the revocation of land rights within 10km.
“We want a stop to all activities directed at the destruction of the means of livelihoods, homes, heritage, artefacts and religious spots, wetlands/forest of the indigenous people of Akpabuyo/Bakassi communities until the following studies”.
Edem also wants a “transparent and participatory environmental and social impact study – Transparent and participatory compilation of schedules of compensations of valued items (already and yet to be destroyed) would have been accomplished in compliance with the subsisting laws of the Federal Republic of Nigeria as well as related International treaties and conventions that Nigeria is a signatory.”

38-year old Nku Enu, a subsistent farmer in Boki Local Government of Cross River State, questions why the said superhighway project is shrouded in secrecy.
“They’ve been moving the woods to where? Who is buying the woods? These are some of the questions we need answered”, said Mr Enu. He alleges that the government has reached a deal with a foreign firm to buy in the woods in exchange for money.
“We have also heard rumours of a certain Chinese firm buying the woods, a deal only the governor and his foreign collaborators know about”.

Donald Ikenna Ofoegbu of Heinrich Boll – an environmental Foundation that supports initiatives that are environmentally and politically green in the search for low-carbon -argues that the justification presented by the state government is insufficient.
“Nobody is answering where the money is coming from, where are the compensation plan, were the people involved in arriving at this choice project or are we just feeding a man’s dream; why is no one asking what the people need.”

And Ofoegbu has more questions on what has been labelled a white elephant project: “How long will it take to make profit from the proposed toll gate, where is the business sense; are they any cost-benefit analysis. If we fail to answer these questions and follow due process in the choice of developmental projects, we would end up having lots of community forest destroyed, their timbers logged and sold by people we do not know. We would end up not having a road and the forest disappears.”

Related Topics:Mercy Abang
Up Next

Gloria Kambedha: How to Make a Career Action Plan That You Can Actually Follow