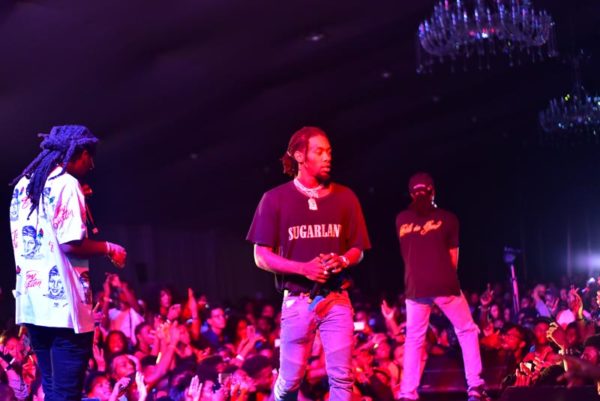 ‘Bad and boujee’, American hip hop group singers, Quavo, Takeoff and Offset, collectively known as ‘Migos’ came to Nigeria, performed and had the effrontery to bite the fingers that fed them!

They watched their brother open his marijuana-ridden smelly mouth in an interview about their visit to Nigeria and to say something as hypocritical as “…and their English wasn’t even that good”. How dare they? Imagine a pot calling a kettle black. When we could barely hear the one that voiced the rubbish? Abi? 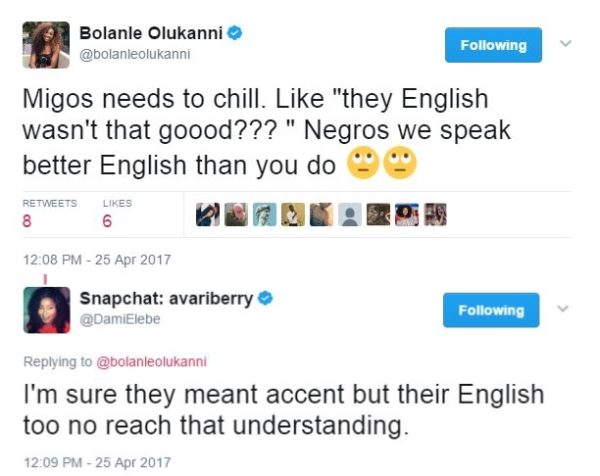 Apparently, Nigerians have taken extreme offense over the comments made by these rap stars and have taken to Twitter, Instagram and Facebook to express their heartfelt anger an irritation.

Number one, they are angry that they have been referred to as third-world. Two, they are feel belittled that these the oyibo Africans suggested they were suffering; and most importantly, three: they are peeved that the street boys judged their English and rated it sub-standard.

First question: are any of these observations made and voiced by the young men untrue?

Second question: was their entire comment negative or did they also include good aspects of their visit to Nigeria as well?

Nigerians need to calm down and stop taking offense over every little thing, especially when they know the facts are true.
If we could channel all the energy we spend arguing over trivial matters to debating over serious matters, maybe we would advance and be better than we are right now.

Migos’ comment was most probably directed at the Nigerian accent, as they mentioned the English in reference to how the people repeated their songs or sang after them. It was not necessarily that Nigerians do not understand the rules of English grammar.

Think about it: the average Nigerian who grows up in the country either learns to speak a local dialect first, or learns to speak English like their parents (who, most times, speak a local dialect). Whichever way, the English the Nigerian learns to speaks is flavored by the pre-knowledge of the local language and as such, can never sound American or British, no matter what. This is also why no matter how good a Nigerian who has never lived outside the country tries to fake an accent, you still know. He/she is bound to pronounce a few words differently.

Accent matter aside, how many of Nigerians who have been raised to neglect the local dialect for the English language can raise up their hands and say that they can speak as well anyone in England? You see young adults who claim they cannot speak their local dialect still make a mess with the precious English language they claim to only speak.

They still say “I am coming”, “it is scratching me” and other common Nigerian phrases that typify out unique kind of English.

The anger Nigerians are exhibiting over this whole issue is not justified. If anything, they should be proud of their originality. So you sang “bad and boujee” with an Igbo, Yoruba or Hausa accent, so what? Would you rather ignore our local dialects because learning them first, affects how we speak English in the long run? Because neglecting them, would mean you sound more like the oyibo (depending on who teaches and what school you go to), right?