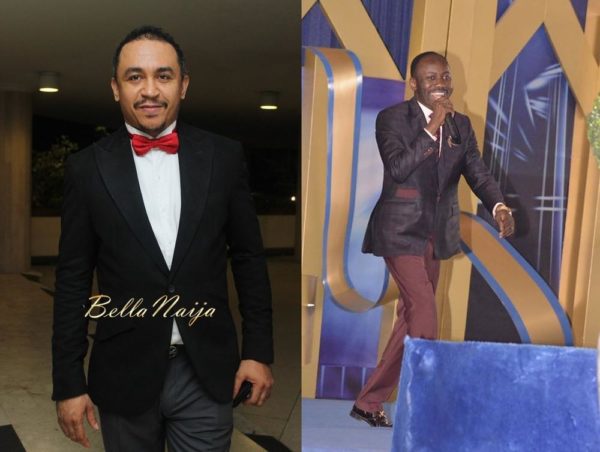 OAP Freeze has reacted to a video clip making the rounds on social media of Apostle Johnson Suleman, the General Overseer of Omega Fire Ministries (OFM) Worldwide where the cleric said that biblical David faced a lot of challenges in life because his mother was not legally married to Jesse (his father).

The mother of King David was a Harlot……Who knew? pic.twitter.com/4EXzmdeWmw

Dear Apostle Suleiman,
As a biblical teacher, let me enlighten you on some issues you raised.
–
Firstly, there is no such thing as a ‘biological marriage’. Marriage is a legal or customary institution, which has absolutely nothing to do with biology.
–
Furthermore, David’s mother Nitzevet, was only mentioned twice in the entire bible and never for once was her profession declared.
–
David’s mother was never explicitly ‘named’ in the Bible either, Rather, she was mentioned in Psalm 51:5 KJV
[5] Behold, I was shapen in iniquity; and in sin did my mother conceive me.
As we are all aware, the book of psalms is a book of songs and poetry, which affords both the writer and the reader the luxury of a ‘poetic license’, to take the context either literally or figuratively as the case may be.
–
Thus it’s never a good idea to base any judgement on a verse taken out of psalms or proverbs, to arrive at a conclusive doctrine, since the ‘poetic license’ often robs that verse of the clarity enjoyed by other more defined scriptures, enabling the reader to arrive at all sorts of crazy conclusions.
–
When David claims in Psalm 139:13-14 KJV
[13] For thou hast possessed my reins: thou hast covered me in my mother’s womb. [14] I will praise thee; for I am fearfully and wonderfully made: marvellous are thy works; and that my soul knoweth right well. I don’t know how I can reconcile something that was ‘conceived in sin’ to be ‘wonderfully made’ as we are all aware that the conception of a child, is the biological ‘making process’.
–
If you read 1st Samuel 16:16-18 where Saul required the services of the best musician in the land, you can liken the biblical ‘David’ to ‘DAVIDO’ of our time, therefore, taking a psalm literally, can equate to taking “taty billion for the akant” as hard core evidence in a court of law.
–
Although the ‘antiquities of the Jews’ and some other historical books might ‘suggest’ a very slight similarity to what you preached, without any biblical or concrete historical evidence, should David’s descendants be alive today, we could risk lawsuits from both Israel and Canada. ~FRZ (Convener, #FreeTheSheeple movement, leader of the #FreeNation)

“I went to school because it was obligatory” – #BBNaija’s Efe speaks on His Music, TBoss/Kemen Issue, Marvis & More in New Interview