Moses Obroku: An Encounter with Khadijah 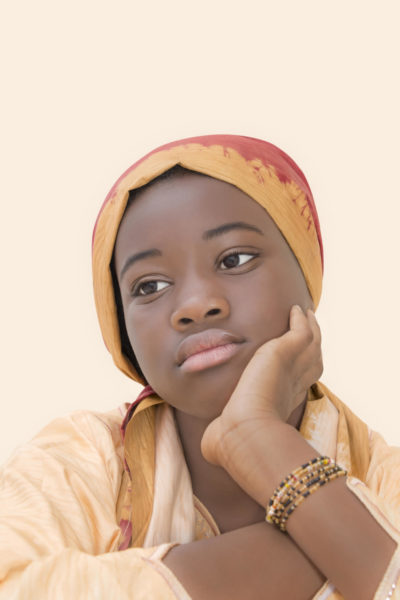 As I groped for the ignition switch of the car in the dark, I heard a rap on the window by my side and saw momentarily a girl with a tray on her head trying to sell me her wares.

I did not pay her any attention, but went right back to starting the car. She knocked again, louder this time, which irritated and forced me to look up, as I saw her lips moving. Having started the car, I wound the window down to hear what she was saying even as I spat out the words ‘I don’t want to buy mango’ –
seeing that was what she had on her tray.

‘Brother please I am hungry’ she said. It was about 9:15 pm on Tuesday May 3, 2017. I had just left the grocery store in my neighborhood, trying to get home when that young girl emerged from nowhere.

‘Why are you hungry’ I asked, ‘is that not fruit you have on your tray?’

‘I have not eaten since afternoon, and I have not sold today’. I noticed her spoken English was good, and she had started to cry at the same time; so I fired a couple more questions.

As I listened and looked closely at ‘Khadijat’, I realized  she may not be more than fourteen years old. The mangoes she had on her tray were the black unattractive type that looked like someone couldn’t have any more patience for them to get ripe naturally. They were the type I would not give a second glance to even if they were offered me for free. As I listened to her story, my heart broke. I gave her some money and watched her walk away, as I swore under my breath.

The little money I gave to her would at best feed her, maybe her aunt and God knows who else in her house for that evening. I got terrified when I wondered about the many more days of hunger ahead that Khadijat may be forced to endure, the criminal child labour she is subjected to, and all the unimaginable dangers lurking in the streets that she gets pushed to daily to contribute to the family’s upkeep.

I wished there was something more I could have done for that little girl to improve her situation permanently. I wished I could have called an existing Government social welfare agency that could have come to rescue the poor child that night.

While it was not impossible, Khadijat’s answers to my questions may have been half-truths; contrived or not, her standing in the street begging, having failed to sell the mangoes on her tray was real enough for me.

Her situation was surely not one any child anywhere should go through. But the cash needed to fix the country to create social security for her and many more children like her are all turning up in some cabinets in flats in Ikoyi, or buried in some graves, storage tanks or abandoned in several bank accounts in and outside Nigeria.

This cash is held by people who were supposed to administer those resources in trust for Khadijat and everyone else. And what is worse? She may even knock on the windows of cars driven by children of those who had stolen her present and future away to beg for food and get ignored, or looked upon as less than human undeserving of any attention.

The abject poverty in the country is getting unbearable. As Nigerians groan under the unnatural hardship being experienced at the moment, more people are increasingly resorting to begging to feed and meet up other basic financial obligations. I fear people can remain hungry for so long before they eventually use every means necessary to assuage their hunger.

Khadijat feebly knocked on my car window to draw my attention. Her male counterparts who are slightly older don’t knock when they appear from nowhere like apparitions during traffic gridlock in Lagos. They smash all your car windows, grabbing and making away with any of your valuables they are able to lay hands upon during daring roadside robberies, brandishing knives or even local guns should you feel stupid enough to attempt to resist them.

As she walked away, I shuddered as I wondered if she would be on the street the next day, and the day after that still trying to sell her unattractive mangoes from the tray on her head, still knocking on car windows to beg to feed if sales were poor.

I wondered too, if she would ever go beyond primary school, and eventually make a decent living; even if it is from acquiring a skill from learning a trade, just to stop begging random strangers like me.

But why is living such a difficult thing in Nigeria? How come we still grapple with stuff people in other countries take for granted as basic necessities of life? I asked no one in particular as I pulled out of where I was parked and slowly drove home.

Iniobong Umoh: It’s Better than Nothing