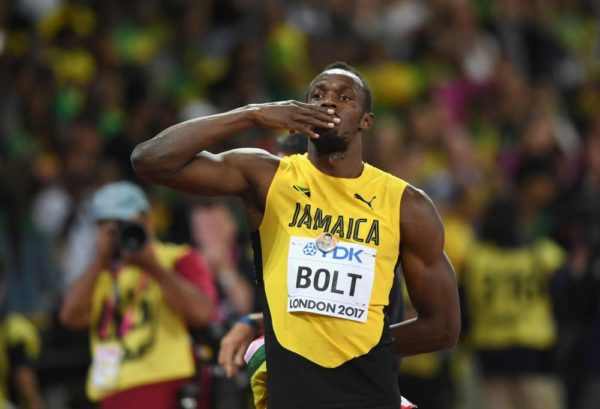 Usain Bolt earned a feat during his athletic career that may be difficult for anyone to repeat for a long time to come. He was the first to hold the 100 meters and 200 meters world records, since fully automatic time became mandatory. Bolt was part of the records holding 4×100 quartet of Jamaica. An eight-time Olympic Gold medalist, he won 100 meters, 200 meters and 4×100 relay races at 3 consecutive Olympics.

At the World Championship; Bolt has eleven medals to his name and is regarded as the most successful athlete of that competition. He was so successful, he was his own competition-breaking own records and setting new ones. With such unprecedented success, Bolt was a celebrity that ruled the athletics world in his time. Raking up endorsement after endorsement, he was also adept at showmanship. He understood the yearnings of his fans and gave them enough drama on the tracks. Who can forget the ‘lightning bolt’ display after a win on the tracks? Usain Bolt would raise both hands at different angles to demonstrate the symbol of lightning, and prance like a peacock to the glee of the fans.

But like most times, all good things come to an end. As he approached the twilight of his shiny career, injuries began to get in the way of his performances. At the just concluded 2017 World Athletics Championship in London, the sun finally set at midday for our champion. Bolt had a slow start in the heat and came second in the semi-finals, losing first place to Christian Coleman. At the final race, the man we had all gotten used to seeing as number one came a distant third.

American athlete, Justin Gatlin breezed into first place while Christian Coleman beat Bolt again to claim the silver medal. I saw the footage of that race and noticed the shock on Gatlin’s face when the scoreboard confirmed he had beaten the world champion. He could not even rejoice in his victory excessively. Rather, as he saw Bolt approaching to congratulate him, Gatlin with both hands raised high bowed and worshipped the legend.

But I also remember the response of the crowd to a-Gatlin win over Bolt, their champion. There were boos and jeers at Gatlin. The crowd did not appreciate his victory. It was as if they were angry at that audacity. They kept chanting ‘Usain Bolt’ in solidarity of the one they regarded as the true champion. The irony was glaring- a new champion won a race, the former champion got celebrated. Analysts suggested it may not be unconnected with a failed drug test by Gatlin some years ago. An important note: people hardly forget or forgive an integrity deficit. But I digress.

While the World was still trying to come to grip with a-Usain Bolt bronze medal win, we all hoped he will redeem his fading glory at the 4×100 meter relay. We were sure it would be one last opportunity for Bolt to show Gatlin and Coleman, why he was king of the tracks. But fate had other plans for Bolt. The hamstring injury which had always been his nemesis showed up one last time. Bolt had barely hit the 30-meter mark, when he winced in pain, limped a few times before aborting the race. He further made a somersault, rolled on his back and finally lay face down on the tracks. There was a gasp from the crowd. Goliath lay fallen.

No doubt the pain was beyond the hamstring. There lay the all-time champion who needed that final race as a glorious curtain call to an illustrious career. Surely, that wasn’t the kind of end the champ had envisioned. I saw the flurry with which the cameramen rushed to get shots of Bolt lying face down on the tracks. It felt like that shot was more important than who won the race. I made a mental note: bad news make bigger headlines.

With Bolt down, the British quartet cashed in on it and won the gold. Truly, the moment one falls from a coveted position, there are always those waiting to take that spot. The British team that won that race had Chijindu Ujah of Nigerian parentage, at the starting block. Clearly, another national asset lost to the British. Nigeria could not even muster a male team to qualify for that race. I digress again.

The image of Bolt lying on the track is heart crushing. It would have been better if we got that ‘lightning bolt’ hand thing one last time. But it’s never going to happen. When a wheel chair was brought to assist the fallen giant off the track, he declined it. Instead, he hobbled across the finish line with the assistance of his colleagues. The symbolism again is obvious. Though the race did not end well, to picture Usain Bolt getting taken out of the tracks in a wheel chair would have been too much to bear.

But then, that is life. There are absolutely no guarantees. One can be at the peak of a career, relationship or health one day. The next day, they may all come crashing down. I wondered if it may not have been better for Bolt to have refrained from participating at the World Championships 2017. He would have had a graceful bowing out.

Regardless of the brutal comments and memes that may follow that lackluster final performance by Bolt, he remains a legend. He came, gathered an avalanche of gold medals, set records and raised the standards quite high. As the sun has set for him on the tracks, it will surely rise for someone else. We are waiting for that individual to make his marks. Till then, we shall keep relishing the entertainment Bolt provided the world at the peak of his career.

BN Contributor Okechukwu Ofili of Okadabooks is our #BellaNaijaMCM this Week

Dr. Urenna Onyewuchi Takes BN on a Journey into the Exciting World of Being a Nigerian Woman in STEM