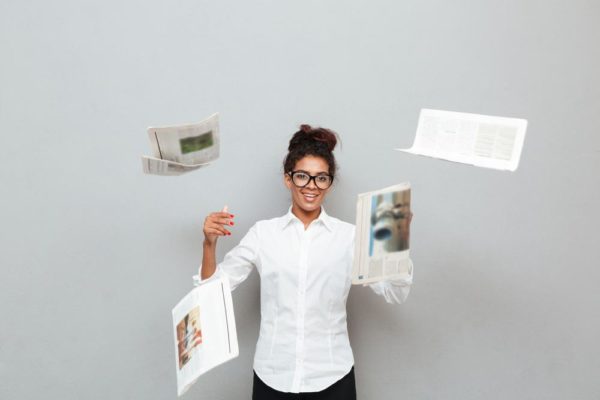 The organization where I work is in the process of moving to their building. Having stayed in this current location for over ten years, a lot of materials and equipment have been accumulated. We are days away from getting into the new building and it is that time to pack. Putting together all the documents can be a hectic and tasking job but thankfully it is a joint effort.

As a senior colleague began browsing through the reports and separating relevant from the irrelevant, the irrelevant ones amounted to over a hundred documents containing thousands of pages. Now, you have to understand that we have several departments and units, so imagine the amount of documents that will be left behind, thrown in the trash or shredded upon leaving. If I am to give an estimate of the number of documents that would be left behind, it would range from five hundred to a thousand. Now that’s a lot.

Paper, as we know it, is a material derived from wood. Other products gotten from wood are toilet paper, newspaper etc. Wood is one of the most abundant raw materials in the world, but the abundance causes a lot of waste to this material.

Paper is a blessing to the environment because when the trees are grown in the environment, they tend to absorb CO2, and continue to store carbon throughout their lifetime. Studies show that the forests in Europe store approximately 80 billion tonnes of carbon in their biomass, thereby, reducing GHG (Greenhouse Gas) in their region.

Prominent paper companies only grow tress with the intent to cut them down for their business. Paper is produced as a result of bleaching of wood pulp using chlorine. The dioxins released from this chemical is toxic to both humans, animals and the environment. They are known to be carcinogenic and cause several adverse effects to the human health. Another major factor why paper is a curse is because of the amount left un-recycled, especially in this part of the world. Most of the used paper goes to landfill contributing to the amount of waste in the environment. GHG such as sulphur oxides, nitrogen oxides and particulate matter (PM 2.5) which pose as a threat to human health is also released into the environment during production.

Paper production also contributes negatively through particulate matter (PM 2.5) which enters into the nostrils and brings about respiratory diseases. All these factors contribute to climate change. In under developed countries such as Nigeria, when deforestation (felling of trees) occurs, afforestation (planting of trees) is rarely carried out, thereby, leaving the land bare for erosion and leaching to occur.

Going paperless is definitely the future, but for now, it is important we identify ways of reducing paper usage/wastage and preventing the health effects.

A few ways are:

Finally, ladies, avoid using toilet paper every time. Some contain Bisphenol and Formaldehyde, can be toxic to the human body. Try dabbing down there, instead of wiping it.

Adefolake Adekola is an Environmental and Social Development Specialist. She is currently the Social Safeguard Consultant on a World Bank Assisted Project (SFTAS) across all 36 states and the FCT. Her experience spans across different sectors as she has worked both in the Public and Private sector. She has a Masters’ degree in Environmental Assessment and Management and hold numerous certifications. She is also an Independent Consultant for top companies in Nigeria and has work experience in Nigeria and the United Kingdom. She is the author of a book titled “Functioning in the knowledge of who you are” and a website where she and a few others talk about everything and anything www.adefolakeadekola.com. She loves to watch series when she is less busy and write articles based on extensive research.