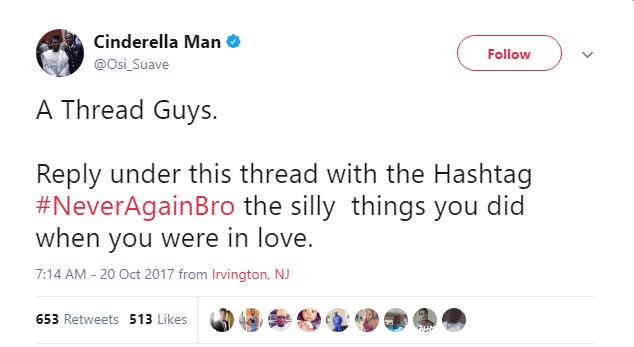 Have you ever looked back at a time in your past when you did some unbelievable things for love and wondered what went wrong with you?

These Twitter Users are definitely doing just that on this thread.

OAP Osi Suave had sent out the above tweet asking guys to give accounts of “the silly things” they did for love, with the hashtag #NeverAgainBro. The replies are hilarious as well as shocking.

See some of the replies below:

My guy babe carry him shirt.

After the break up we saw her new man rocking it on IG ???? #NeverAgainBro

My guy was still paying for full bouquet for dstv for him babe after they broke up.

Baba went to calabar to suprise his babe

Madam was camping another corper. Na we contribute bar make he for come back lagos

Was getting busy with ex in her house until her popsi suddenly returned early.

I hid under the bed for 4 fucking hours #NeverAgainBro

I was formatting and buying accessories for the desktop PC another guy bought for her #NeverAgainBro ??????

My first girlfriend wanted go lock up sex till wedding night, but when she got pregnant, even she didn’t know the owner of the pregnancy #NeverAgainBro ??

I just remembered one that used my money to abort the pregnancy that the guy upstairs, directly above my room gave her #NeverAgainBro.

went on a date, she saw another guy she knew, went to his table and sat on his laps. Came back, asked if I was mad, I said no, she returned

lol I used the last N200 in my hand to buy her Yoghurt. Couldn’t beg for money so I trekked from Yaba to Gbagada. She never called again.

Was helping babe to keep her virginity till marriage until she met someone she really liked and decided to busss it open. #NeverAgainBro

As in when things got all steamy I’d say “baby we need to chill you know we’re keeping your virginity.” ???

Saw a Micheal name on her status and asked who is that and she said just Angel michael ??

After i caught them, She told me not to talk rudely to the guy she’s cheating on me with because he has a tender heart. #NeverAgainBro

I was always paying for her monthly BIS at 5K/month back then while I was using Symbian Phone Opera Mini cheat. ???#NeverAgainBro

Drove from lekki to ife around 10pm to pick up a girl cos she claimed no transport. Got there,babe phone was switched off. #NeverAgainBro

I just sat in my car crying,catarrh was coming out of my nose. ??

Borrowed nearly half a million 4him 2rent an apartment bcos he got a new job in a new city. Dude moved in with his baby mama. #NeverAgainBro