Lota Ofodile: The Kind of Breakups No One Ever Talks About 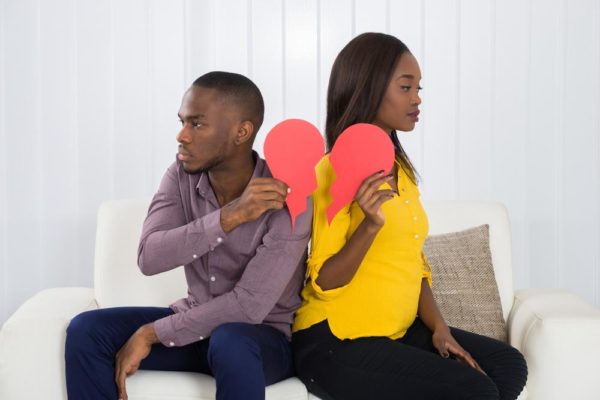 Breakups are by far one of the most painful experiences in life. And depending on how deeply in love or how much time was invested in the relationship, the pain can be anything from mild to excruciating.

I have had my fair share of breakups, so I am no stranger to them. And being the relationship junkie that I am, I have come across the million and one suggestions that exist for getting over breakups, so I felt prepared enough to handle them however or whenever they presented themselves… or so I thought, until a friend of mine, Ndidi (not real name) broke up with me. A very good friend I might add. And it hurt so much.

About this time two years ago, I was in a very bad place in my life as I had made what was easily my dumbest decision yet. I was romantically involved with someone who was in a complicated on/off relationship. Granted, I didn’t know about it at the beginning, but I found out a few weeks later and still stayed. Because I was neither proud of myself nor the situation, it wasn’t something I could tell just anybody about. So I told only a few people—my really close friends—the people I feel most comfortable with, and I know I can trust with just about anything. Ndidi was one of them. My mom and I are pretty close and she didn’t even know about it; that’s how embarrassed I was about the situation.

Anyways, it was a few weeks into the flawed relationship when I had the most awkward Facetime conversation with Ndidi. During the call, she straight up told me that she could no longer be friends with me because of it. It’s been almost two years since that Facetime call happened, and I’ve still not successfully processed that “breakup”, so I honestly don’t even remember what my reaction was. But she wasn’t kidding. That was the last of our everyday Facetime conversations.

I felt pain, betrayal and sadness, but mostly confusion. Confusion because I suddenly realized that no one had ever taught me how to deal with losing a close friend. What are you supposed to do? How do you react? Do you get to ask them why? Or talk about “remember how we did this and that?” Do you beg them not to leave? Remind them of the memories and bond you have together? I didn’t know what to do. It was something I never thought I’d have to experience. And don’t get me wrong, obviously friends come and go. Life happens in phases right? And there are people meant for each phase. But there are some friends that are there for the whole ride, or at least you hope they will be. I thought she was one of them so I didn’t know how to handle it. Just think of one of your closest friends. Someone you’ve been friends with for a really longtime. Someone you were sure you’d still be friends with 50 years from now. Then imagine doing something so stupid that they are so disappointed with you that he/she decides to end your friendship. Yeah, it sucked. I was genuinely hurt and lost.

I remember being so confused because I honestly couldn’t believe that was it for us. This was a friendship of over 8 years, and at least 3 out of those 8 years were solid. I cried because I wasn’t sure what else to do and crying is weirdly one of my hobbies. I called up two of my other really close friends who were also good friends with her, and told them what had happened. They weren’t sure how to react to it either, but their response was something along the lines of “Lota, you messed up so you can’t really blame her,” and “everyone has their limits”.

And it’s so true! Everyone does have their limits. And we all should. I really screwed up. Like I said, it was my worst decision ever, my biggest regret. So in the end, even though I was hurt and I wished our friendship didn’t have to end, I got it. I get it. And I am learning from it. The decisions we make affect the people in our lives. You can’t just live your life without considering the repercussions it might have. Everyone has their limits and it’s important to be aware of that. But more importantly, be sure to know yourself well enough to know what yours are, and try not to lower or cross them. Not only will they save you from unnecessary headache, they’ll also serve as a foundation for what your values will be, and the kind of life you want to live. They will essentially determine the kind of person you are.

It is so important that we know our limits. It is what separates the person that leaves a problematic relationship, marriage (or in my case, friendship) from the person that stays and continues to suffer in silence. It is what enabled anyone that has made his or her way out of any less than ideal situation. That and courage and self-respect obviously—they all go hand-in-hand.

It took my friend breaking up with me for to realize the importance of having limits. Do I miss her? Of course. But it is what it is. It is difficult losing a dear friend, but maybe it needed to happen so I could learn from it.

Love without Boundaries with Bukola Ayinde: All Children are Welcome