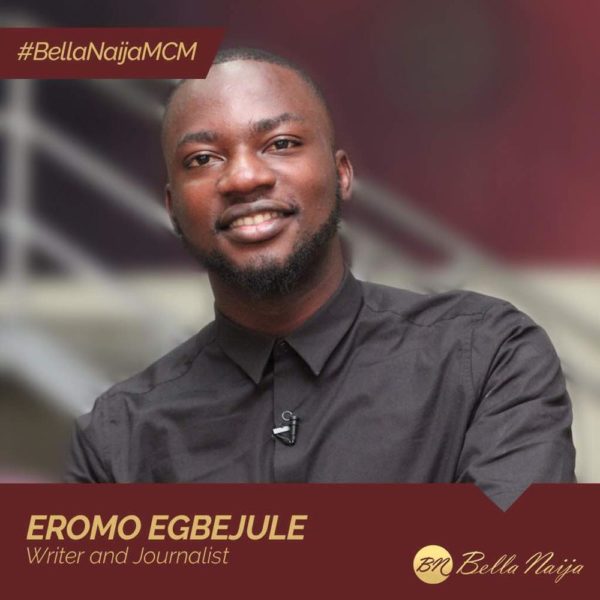 It was Pulitzer Prize winner Walter Lippmann, who, in the 1920s wrote: “There can be no higher law in journalism than to tell the truth and to shame the devil,” and that is what our #BellaNaijaMCM this week Eromo Egbejule has been doing for nearly a decade.

Eromo is a freelance journalist whose work has been featured in Reuters, The Guardian, Ventures Africa, The Africa Report, as well as Guardian Nigeria.

Eromo, who describes himself as a storyteller, had always loved writing, being a voracious reader from an early age. As it usually is with kids, Eromo was a jack of all trades while growing up – trying our web design and learning how to trade forex at 15, dabbling into graphics design at 16, and learning German and planning to travel the world by 18.

It was in 2009, at 19, that he got into the journalism profession at The Guardian Nigeria. Prior to this, Eromo and his friends founded/funded a campus newspaper. A chance reporting, as he describes it, of a riot within the school premises led to him being published in The Guardian Nigeria.

After this time, Eromo took on roles as freelance journalist, editor, corporate communications, and content creation in a diverse range of industries – from the media, to the movie industry, and non-governmental organisations.

In 2017, Eromo became a visiting lecturer/research fellow at Malmö University, Sweden where he “taught seminar classes and gave lectures to students of the Masters in Communication for Development degree, regarding (his) work in Northeast Nigeria, alternative forms of storytelling in the developing world and more.”

Eromo’s name is often associated with in-depth investigative reporting that shines the light not just on the popular side of stories, but other sides that rarely make it to the news, especially in crisis stricken areas. Eromo tells the stories yet untold, providing a balanced perspective to the stories that make headlines.

In 2014, he was a recipient of the Prince Claus Travel Grant.

In 2016, he won the PwC Journalist of the Year for SME Reporting Award and was a finalist for the CNN Multichoice African Journalist Award in the same year.

He is one of the six BudgIT Media Fellows for 2017. In the same year, he won The Future Awards Africa (TFAA) Prize for Journalism award.

We celebrate Eromo for his versatility, from arts to pop culture, to music, tech, and business, and for his hardwork that has culminated in him achieving so much at 27 with so much prospect.

Creating a Safe Space for Mental Awareness in Nigeria! Meet Victor Ugo, the Man Behind MANI

Lota Ofodile: The Kind of Breakups No One Ever Talks About