Niyi Ademoroti: If You're Homophobic, Own It! 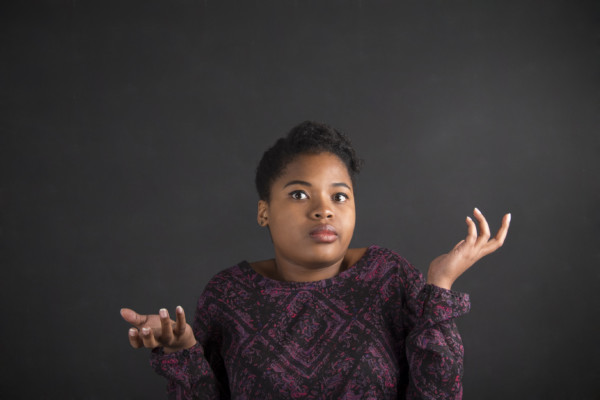 Things we know for a fact: homophobia is a norm in Nigeria. Maybe it’s the religion – because, you know, we’re very religious – but we don’t abide gay people. It’s our 21st century culture, an inheritance from colonial rule. Our idea of love is a man and a woman, anything else is an abnormality.

Homophobia is so normal in our country that we have a law against same-sex acts, where people found guilty could spend 14 years of their lives in jail. We’re so homophobic that the popular phone brand, Infinix, perhaps aware of their target market – the uninitiated – took out an ad in the University of Port-Harcourt, asking that students to “Say no to Lesbianism, Homosexuality and Drug Abuse.” 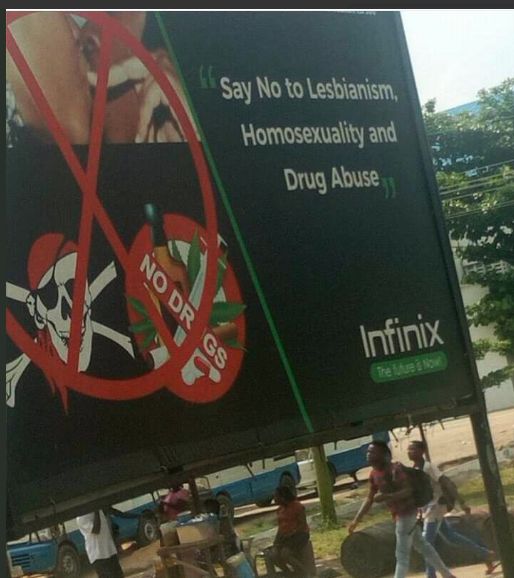 (Ignore the lesbianism/homosexuality tautology, it’s hardly the most ridiculous thing about it – although it definitely is indicative of the ridiculousness.)

Why then do we continue to insist on refusing homophobia as a label?

I’m not homophobic. I don’t judge people. This will never look normal to me.

At least two tweets in similar configuration have been in heavy rotation on Twitter, gathering thousands of retweets. They both reference photos shared by black American men in relationships, men being in love and minding their own business. 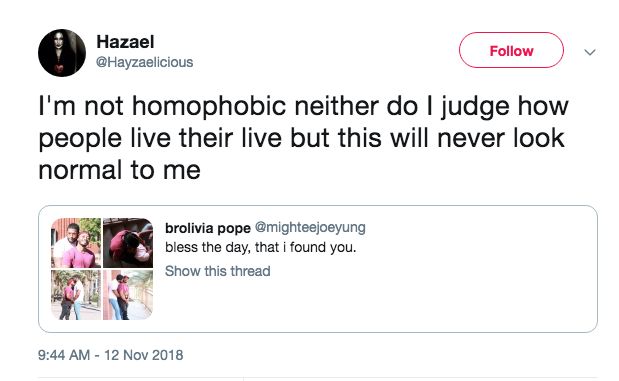 Homophobia is defined as the dislike of or prejudice against homosexual people. Prejudice is preconceived judgement or opinion, basically close-mindedness, or the damage that results from it.

The easiest way to put into perspective why saying two people in a relationship – homosexual love – will never look normal is homophobia is to imagine the same is said of black people. Let’s imagine that what was said was, I’m not racist and I don’t judge people but this picture of black people in love will never look normal to me, or maybe, this picture depicting interracial love will never look normal to me. Because that is what the photos depict: love. And maybe what those people who say they’ll never find it normal think they mean when they say they don’t judge is that just seeing it is what irks them, not the idea of two men in love, after all, they won’t beat them up or deny them opportunities. But we can’t remove the physical manifestation of homosexual love from homosexuality. That’s what it is, “an enduring pattern of emotional, romantic, and/or sexual attractions.”

To describe the mere existence of another as abnormal is prejudice. And prejudice against homosexual people is homophobia.

It’s important to clarify that your inability to see the normality in two people of the same gender being together is your fault alone. We may try to shoulder the blame on our society or the reality of things, how Nigeria is today, but the responsibility to begin to see it as normal is yours alone. And if you can’t, then simply own the homophobe label. It’s yours. 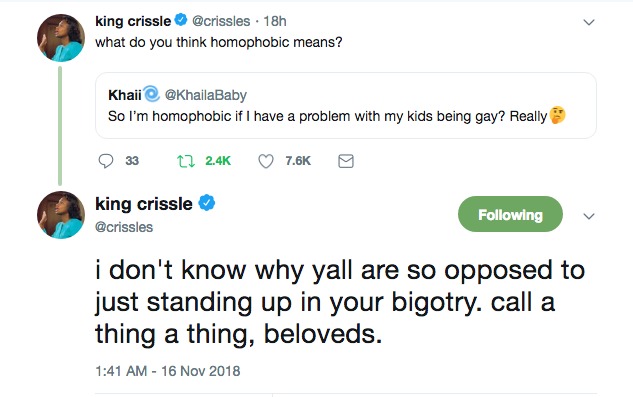 What the people who quote these tweets of homosexual love, announcing their failure to see it as normal, refuse to know is that: it is looking at the photos shared in the tweets, simply looking at them and opening the mind to seeing how random it is, how effortlessly human it is, how it’s just two people in a relationship, in love, that leads to them to begin to see it as normal.

#PVCitizen: It’s Time to Take the Next Step as an Active Citizen

The Mr. Perfect Series by Evi Idoghor: My First Date