#LiterallyWhatsHot: Love as a Weapon, a Weakness & Bittersweet Joy in "The Book Of Pain" by Ogundare Tope 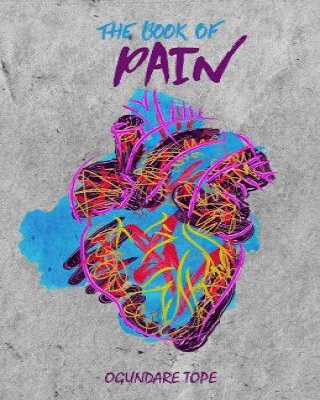 In The Book of Pain by Ogundare Tope, the distinct narrative of love, death and painful loss come crashing together in one raging work of art. The lines and borders of emotion run so thin that they completely fade and these three become one in a sacred trinity. The breadth of human feelings is delicately captured in the book, putting our daily emotions in full perspective.

Love is a fire that rages only in the mind, vivid flames in the subconscious. It is consuming passion that kills the soul. Passion is a willful servant, the eager messenger of lust and the dark emissary of death. It is a type of madness.

Death is destruction of dreams, of memories, of souls while bodies exist and of bodies while souls still live. Every feeling is laid bare in its face.

In this collection of powerful poems, Tope examines love very closely, looking at it through the barrel of a gun set to mortally wound, the pin of a grenade about to self destruct, the tear-filled eyes of a lover staring at a turned back. Love is at once a weapon, a weakness and bitter-sweet joy.

Cervical Incompetence tells of two loves as starkly different as the dark sky and the bright moon, yet irrevocably drawn to each other. In Our Music never Stops, we pay homage to Laura, the belle of the ball that glows like the sun, the ghost of a love long buried. It is impossible to ignore the glint of desolation beneath the words,a certain feeling akin to being lost at sea without a map.

The pain in this work is indeed raw and feeling. Hidden in intense moments, it sends little barbs that leap away from the pages straight into your own heart. This is the very essence of writing and it is well executed and delivered. Floating Bubbles takes us to the very heart of the pain as it is depicted on the exquisitely done cover of the book, blood and life swirling in a rainbow of hurt and emotion.

If I had to pick a favourite poem, it would be the eponymous poem which is well deserving of its name. In The Book of Pain, the writer asks everyone of us to think about the meaning of our pain and how we let it guide us. An excerpt from the poem is now permanently on my phone’s home screen, a constant reminder of the beauty of literature and what it really means to suffer.

Tope’s words flow in a steady, meaningful stream, familiar stories told in a lyrical tone. We know who the subjects are because they remind us of ourselves and people we know, hate and love.

With skillful dexterity, the writer employs the use of metaphors to tackle hot topics people would rather not speak about. Damaged Doors is a story of sexual abuse about doors forced open in the dead of night, by thieves who smile at you the morning after. Harmattan Blues has a vaguely political undertone, speaking about the arid desolation spreading in the North. It moves sluggishly and slowly drifts down on the rest of us.

Tope shows a certain flair for medical terms and it is entertaining to watch as these threads are woven seamlessly into the poems. This body of art can only be described as colourful, as it takes us on a full exploration of the spectrum of life. It mixes the rage of red with the painful swirls of black, finally masking it all with a shiny sheen of pale, half-hopeful yellow.

***********************
Reviewed by Zulaikhah Agoro. She is a fourth-year Building student at the University of Lagos and Campus Editor at LinkedIn. She curated the Random Thoughts series on frandela.com and her work has been featured on Agbowo, the Okike Prize Anthology and Brittle Paper. She was shortlisted in the top 10 of the Afreada Photo Story Contest 2016 and the top 35 of the Africa Writes x Afreada Short Story Contest 2017. She writes and edits freelance pieces when she is not busy daydreaming about spending money she doesn’t have…yet.