Aluka Igbokwe: This Is How To Be A Real Man 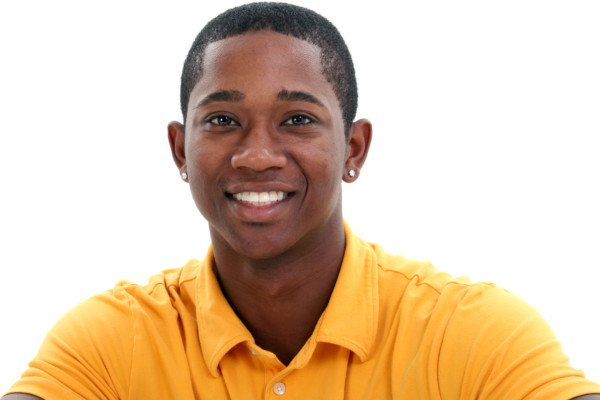 Now that I think of it, I remember that day. I remember that the sky was not overcast, there were no fluffy white clouds that hung low. It was a hot day and I lay bare-chested on the cold tiled floor. I remember also that the sitting room was illuminated, the light from the fierce sun sliced through the curtains in sharp darts. I remember there was no electricity, else my mother would be on the one-seater. Her eyes behind her gold-framed glasses, focused on the television, watching her favorite soap. Tinsel? The Johnsons? I do not know.

So it came to be that my father approached my mother to remind her about the Okra soup she promised to prepare for him. But my mother’s reaction shocked me. I’d never seen her behave that way before. She flared up and said ugly words. How my father was only concerned about his food and not about her moods. Did he not see her mood before reminding her about a ‘nonsense soup?’

I remember that she called the soup ‘nonsense’ because her voice suddenly was lowered. You see, my mother is greatly affable, and her sense of propriety is one I greatly admire. And I quickly realized that whatsoever that must have put her in a very petulant mood was something really awful. My father stood in front of her for so many minutes, clairvoyant, intently staring, as if that act alone would grant him knowledge to the melange of thoughts raging in her mind. He examined her more as if to understand something vague that left him bewildered, as if he would somehow decipher or unravel the mystery behind such untoward behavior and probably extirpate it forever. But his stare did not have any unraveling quality, so when he got tired, he asked me to cut the onions and he took the okra to the kitchen to slice into rings.

I remember that the soup did not take long to be ready. And when it was, my father smelled of soup ingredients. He, my father, arranged their eating plates on a stainless steel tray, along with drinking water and a wash-hand basin on the dining table. He called my mother to come and eat, and when she pretended not to have heard him, which I think was more of guilt than pretend-deafness, he went and pulled her softly to the dining table. And she did not resist.

Midway into the food, she decided to say what the problem was. Do you remember Mama Ekene? My father narrowed his eyes to cracks as though that would aid his memory. Even after such mental exercise, he shook his head from ear to ear. Mama Ekene, my mother repeated, my seamstress! Oh! The one whose last child is a special needs child? My father asked. Exactly! My mother answered. She tapped him out of reflex, and when she noticed my father’s winced face, she rubbed his arm softly, as though to smoothen creases, an unspoken apology.

She reiterated how Mama Ekene had called her earlier to say that she returned from the market to find out that her child was dead. That neighbors said that they heard a heavy thud and rushed out only to see her son bleeding profusely on the cemented floor. From all indications, he tried to maneuver the balustrade from their flat but lost control. Ekwuzina! My father shouted, dropping the mold of eba between his fingers. I imagined that his stomach had tightened and his appetite was lost. My mother did same too and kept sighing. Still lying on the cold tiled floor, the tiles became even colder to my bare skin, my skin became taut and goose pimples spread across my pores. May his soul rest in peace, they chorused, and continued eating. Peace returned. Another quarrel averted.

I remember telling this story to my friend in the university. More in a bid to pass on marriage nuggets than to publicize the affairs of my family. I remember how he praised my father for his maturity, and even doubted if he would have acted same way had he been in my father’s shoes at that moment. But he said something else which caused a tiff. He said my father didn’t act like a real man. That by not reasserting his position as the head of the house, by not only cooking the meal but also serving, he had made himself effeminate. I did not agree with him, and I told him so. I told him that from all he had said, he still saw marriage between a man and a woman as one largely centered on authority. And maybe violence. He refused vehemently and tried to explain further, but from his explanation, I could see that it was not a woman to love and hold but a puppy to own and control that my friend desired, and in extension, most men.

That submissiveness and respect is defined narrowly as something a woman shows a man in marriage, and never what a man shows a woman. And this submissiveness and respect, with no visible trace of dissent, make insecure men, obviously unsure of their identities, feel like real men. That authoritativeness. Sit down here. Do this now. Do that later. No agitation whatsoever makes you a good woman, a wife material. Otherwise, you’re a bad woman, unfit to be married. But I think it is only silly woman who will behave like a puppy just to be likable. And it’s just sad that men who do not aspire to have puppies as partners are seen as sissies. I believe a good relationship or marriage is one where love is mutual. Respect is reciprocal and trust is paramount. Authority should never be in the equation!

Most times, I choose to imagine the many things that would have gone wrong had my father acted like a ‘real man.’ By my friend’s terrible definition, this is how a real man should have acted: Be shocked about your wife’s reaction. Be mad about her mood swings because she has no right whatsoever to be spontaneous and not in control of her moods. Because, somehow, marriage makes you a perfect human, not influenced by circumstances or feelings. Touch yourself, your beards, your taut chest and grapple your sex organ, and laugh foolishly when she calls your soup ‘nonsense.’ Ask her again, just to be sure, if she really called your soup ‘nonsense.’ A real man would slap her first, to shut her up, to bring her back to the real world, where a woman should never call her husband’s soup ‘nonsense,’ never talk back at her husband. A real man would remind her about how much he spent marrying her and how she should always be submissive. A real man would command her immediately to the kitchen to prepare the soup. A real man would sit, legs crossed, eyes on the television, watching soccer, waiting for his food to be ready. A real man should never cook unless when he wants to give his wife a treat, just to be romantic.