Doyin, who just turned 26 (she’s very excited about that) and moved from Osogbo to Abuja, shares her story. 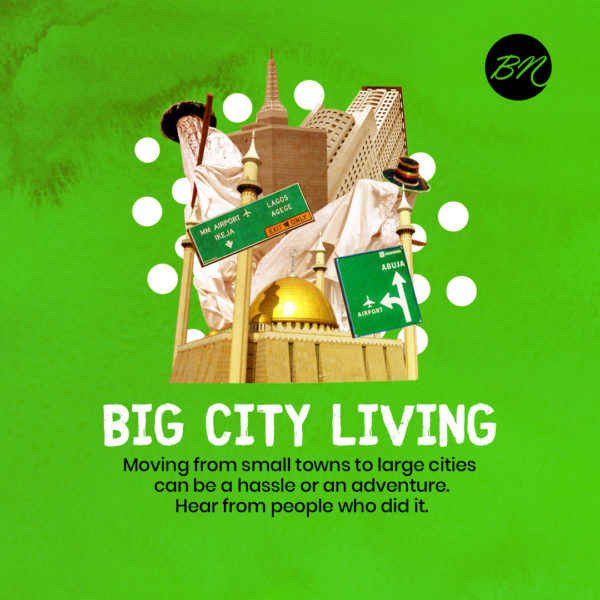 Growing Up in Osogbo
So I grew up in Osogbo, had my primary and secondary school there, then moved like thirty minutes away to attend uni in Ile-Ife. (Yeah, I attended Obafemi Awolowo University.) So I basically moved around Osun State for the first 22 years of my life.

Growing up in Osun State was easy, quiet and easy. I used to think that it was so dead … well, pretty much I still think it’s so dead. But people live there and they seem to enjoy it. It’s a very cool place to live in, actually. Very quiet, very cheap, very mind-your-business-ish. You pretty much have most of what you need, but no extras. Not the fancies, no night life, none of that. Come to think of it, I think they have a couple of clubs. If you can call them that. They have lounges, bars, and all of that. A couple of dead hotels, a couple of good ones too. Very few, a handful of them. Osogbo is a place where by 7 PM everyone is closing up shop to return to wherever they came from, their houses and all of that. You’ll see old people and razzbites sitting at bars and making noise and shouting at each other.

I remember in uni many people had an issue with me not behaving like a typical ‘Osogbo girl,’ or like my foolish elitist friends call it, ‘Osgidi.’ Most people said I was forming like I came from Lagos. Some actually assumed I did. Well, I didn’t have the opportunity to grow up as a proper Osogbo babe, because I was an omo get inside. Growing up, my father would drop us off at school, pick us up, go to church. We had a couple of family members but we didn’t go visiting much. Pretty reclusive life we lived. Even when I go home now, I’m always inside. Just stay indoors, finish. But I guess they have some sort of nightlife, because my younger brother, who’s more outgoing and has several friends, I see him go out some times. I guess there’s a nightlife somehow.

My secondary school was one of the tushest. Our Lady & St. Francis Catholic College (OSCCO). One of the proper ones—at least they tried to make us proper. But … yeah. If you met any cool people and you asked them what school they attended, it’d be OSCCO (that was mine), or you had Roseful, and at a time we had—I think Kings and Queens was after us. Just a handful of good schools. Not that they were teaching us better than the rest of them sha.

I can’t remember the first time I went to a city. Not clearly, anyway. But it was Lagos, and I know I didn’t like the experience. I felt there were just too many people living there!

NYSC and Moving to Abuja

After uni, I moved to Ibadan, Oyo State, which is also a town in some people’s definition *sideeye*. I worked for about a year, then moved to Abuja in 2016 for NYSC. I always knew I would live in a city apart from Lagos, so Abuja was an easy pick. Interestingly, I always thought I was going to serve in Abuja. Okay, so this was my logic: I wanted to serve and settle down in a city but I didn’t like Lagos enough to want to move to Lagos. I always thought Lagos was too stressful and I could not for the life of me just cope there. Lagos people have too many mad people. Abuja seemed like a better option. And I’ve never been to the East before in my life. I’d actually never left South-West until I arrived in Abuja. I was in Osogbo, then Ife, then Ibadan.

Ibadan is quiet too, but not as quiet as Osogbo. At least you still have cinemas, you still have the malls. Osogbo does not have a cinema, hello? So Ibadan is a huge upgrade. You could say you were going to the club in Ibadan, a few proper clu—errr. But sha, I didn’t go to the club when I was in Ibadan, but at least they have. And they don’t have that in Osogbo.

The first time I got to Abuja I thought: express roads! You see big big wide wide express roads, you see big big cars driving here and there. Like a city, but it had a lot of Hausa people, so I was like: Okay. How do we do this? I also thought it was more like a glorified Osogbo.

I moved in with my cousin, went straight to camp, then moved back to her place after camp. We didn’t live in a ‘tush’ environment, but we didn’t live in the ‘poor’ areas. I lived there for about one year four months, until she moved from Abuja and I had to get a place on my own. Living with her was one kain, but hey, there was food and shelter. It was a good place and it served its purpose.

I had lived in Abuja for almost one and half years before I had to go house hunting. Thankfully, my best friend had moved to Abuja for NYSC as well, and she had to move out of her aunt’s place at the same time. So we got a place together. We didn’t have to answer the awkward questions single ladies that have to answer when looking for apartments. All our landlord wanted to know was if we were working and how we intended to renew our rent after the first year.

Getting the first rent wasn’t so difficult, although it felt strange to have to pay rent all by ourselves. You know, adulting! My friend and I had lived in private hostels in Ife for about four years, but our parents were responsible for those. Now we had to put together the rent, albeit begged for from family and friends. Thankfully, we were both working and had some money on our own. With rent paid, we had to think of furnishing and blah blah. Let’s just say we survived and have a pretty decent apartment at the end of it all.

The most interesting thing that distinguishes Osogbo and Abuja for me is that Abuja is more ‘happening’ than Osogbo. I had the ‘expressway effect’ at first too, wondering how everywhere was so developed and you had everything you could think to do for fun. Like I said, I wasn’t a very outgoing person—I’m still not an outgoing person. But in Abuja, I laju. I open eye.

I went to the club here. It was my first time going to a club. Was it? Yeah, I think so. Or was it Lagos? I can’t remember now. But at least I have a bit of nightlife here. It’s a city, like we all know. Although here too, by 8 PM, 9 PM, you still have people getting ready to go home. But a number of people still have party party, nightlife, blah blah blah blah blah. Now I can say I’m going out, coming back 3 AM, 4 AM. It’s not frequent or anything, but in Osogbo I couldn’t dare that. There weren’t that many places to go to, if any sef. Here I’m trying out new places, new things, eating new kinds of food, meeting new people. Here you can think: Oh there’s a new place here, let’s check it out, that kind of thing.

Fun fact: I never had to take a cab in Osogbo or Ife, or even in Ibadan. Everywhere was close to everywhere and transportation was cheap. Heck, we’d still price taxi for ₦30 in Ibadan depending on how close the distance is.

Though Abuja isn’t as fast-paced as Lagos, or as expensive as Lagos or some of the other cities, it is completely different from where I grew up and it is absolutely fun trying to fit in and ‘settle down’ here. I might even be here for much longer sef, because my husband-to-be lives here too. We’re going to be married and get settled here.

The move has absolutely been worth it. I always knew that after secondary school and uni, I wasn’t going to settle down in Osogbo. Because, I mean, my profession, my work, my means of livelihood has nothing to do with Osogbo. Osogbo has more government workers and a few business people here and there. And I remember when we did the first IT then, was it 300 level or something? I was looking for an estate firm in Osogbo, oh Jesus. Because I didn’t want to travel. I went to one place like that, it was so dead. I was like, Mba, I can’t do this. So I was forced to go to the Ministry of Lands. So imagine me now saying I’m staying back in Osogbo. What am I doing there? Besides, I’m no longer that Osogbo get-in-the-house babe. I’ve evolved. I’m a city babe!

If you loved this episode, you can check out Samsudeen’s story about moving from Offa to Lagos, and Phidelia’s, on moving from Benin to Lagos.

Filmmaker Michael ‘Ama Psalmist’ Akinrogunde is Our #BellaNaijaMCM this Week!