BellaNaijarians, Here's How You Can Help Victims of Cyclone Idai in Mozambique, Malawi & Zimbabwe 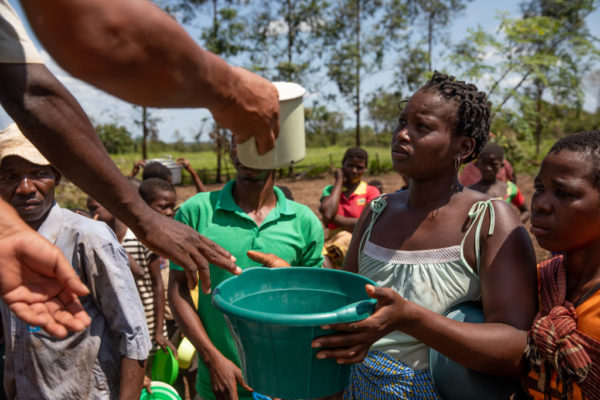 SOFALA, MOZAMBIQUE – MARCH 26: Local Christian missionaries hand out aid to villagers on March 26, 2019 in Sofala, Mozambique. Flood victims have also received food aid by helicopter from the World Food Program and its partners. Tropical Cyclone Idai is considered one of the worst cyclones to affect Africa as it swept through Malawi, Zimbabwe and Mozambique leaving hundreds dead and an estimated three million people displaced. (Photo by Luke Dray/Getty Images)

Have you heard about Cyclone Idai and its devastation of Mozambique, Zimbabwe and Malawi?

On March 14, the tropical cyclone hit Beira, Mozambique. Houses were completely submerged and properties and hundreds of lives were lost.

The Mozambican president Filipe Nyusi said 600,000 people were affected by the cyclone, before it moved to Zimbabwe where it caused over 415 deaths and 200 injuries.

Although the rains have dissipated in Manicaland and Masvingo provinces of Zimbabwe, the flooding caused by the cyclone continues to cause destruction. Reliefweb adds that over 16,000 homes have been destroyed, families displaced, and hundreds missing.

AfricaNews reports that an outbreak of cholera has hit the same cyclone-hit region in Mozambique, with at least 1,052 people infected—an average of more than 200 new cases every day.

People who spoke to UNICEF about Cyclone Idai discussed wind sweeping off their roofs and water filling up their houses in the middle of the night. “I thought we were going to die,” Martha from Mozambique said. She hasn’t heard from her husband since the night of the flooding, she said. “I wish we were together now.”

These are real lives destroyed by the cyclone and there’s nothing we can do help. Help them build their lives back up from the ground, help fathers feed their children and help wives find their husbands.

UNICEF has said an estimated 3 million people need help, more than half of them little kids, and the foundation is trying to raise $122 million to help them all.

You can VISIT THIS LINK to donate to UNICEF and help to get the lives of other Africans back on track.

You can also donate to the World Food Program USA, which is feeding people affected by distributing food in the city of Beira and surrounding areas. You can DONATE HERE.

You’ve no doubt heard about Doctors Without Borders. Well, they too are on ground treating the thousands who have been injured by the deadly cyclone. You can also DONATE TO THEM to ensure that more and more lives are saved.

Nothing is too little to donate, as your mite can buy maybe a handglove or a sachet of water or a snack—little things that are desperately needed. Please, please donate and help save lives.

Your Better Self with Akanna: 5 Stages of the Emotional Roller Coaster