Ifeanyi Abraham: On Nigerians & Racism - A Welsh Woman Helped Me Realize My Identity As a Black Man 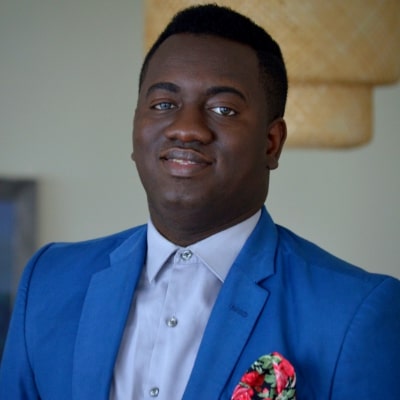 I was living in Dubai when I met Carys on Tinder. We matched and she replied my messages after a few days. We got to know each other gradually, but I couldn’t sense what her goals were. She was married, yet was on Tinder. Why did she match with me? A dark-skinned Nigerian? A black fetish perhaps? Was she looking for a third wheel in her marriage or for some quick fun? These questions were always running through my mind, but I never asked. We were different culturally, so I had to measure my jokes and flirting a little bit. She would tell me about her husband, her son and her work with charities back in the UK.

A week into our conversation, we had our first clash and it was one that left me with a lot of things to think about. We were having a conversation about the kind of men she liked when she recounted that although she had had relationships with different people, she always came back to her relationships with black men. I asked what her favorite song was and she said “My Girl” by The Temptations. For those who don’t know, The Temptations is a group of five black men who released a series of successful singles and albums with Motown Records during the 1960s and 1970s. At this point in the conversation, I sent her a WhatsApp message saying “Does Carys have a black men fetish” with a winking smiley. She replied, “Please don’t”.

I didn’t know how serious the conversation had become for her until she said “I don’t find what you said funny”, and then she asked if I felt fetishizing black people was funny or if it was a compliment. At this point, in my mind, I was like okay, that went left pretty quickly. Let’s back up a bit.

I tried to lighten and change the conversation, but she wasn’t having it. I told her I had never seen things from that angle and that where I come from, having a black man fetish has always been considered a good thing. In fact, I welcome being the subject of a person’s fantasy in that way. At this point, she blew her top saying “This perception is steeped in colonialism, white supremacy and the idea that black people are hypersexualized. It’s the bullshit they use to justify the lynching of black men for functional crimes against white women, used for the justification for the rape of black women, and also used to justify 300 years of slavery and 100 years of racism and segregation. Yet, you see white women fetishizing black men as positive? You shouldn’t be comfortable being fetishized in that manner”.

Phewww! That wasn’t a lecture I had been expecting on a hot Dubai afternoon and it took a lot of my people management skills to extricate myself from that situation.

Did this Welsh Woman just educate me about my identity as a black man?

Chimamanda Ngozi Adichie, a Nigerian writer who was recently named on the 100 Most Influential Africans List by The African Report, came under a lot of bashing on social media for certain statements she made about identity and how to be black while speaking to The Economist’s public policy editor, Sacha Nauta, about feminism and the intersection of race, gender and politics.

She made a distinction between colorism which is prevalent in Nigeria, and racism which is barely known to Nigerians that grew up in Nigeria.

In her words, “Identity is something one always has to negotiate, at the same time it is external. So it’s something inside and outside as well, right? I identify happily as black now, but I didn’t always, because I became black in America. When I went to the U.S to go to University, I realized, oh! I am suddenly something else not black. And it’s not to say that I didn’t know that my skin is the glorious color of chocolate – which I wouldn’t change for anything by the way – but it’s the idea that there is a meaning attached to skin color in certain parts of the world. I had come from Nigeria where skin color didn’t have meaning – ethnicity had meaning and religion had meaning – to the U.S where racism was a big deal, and be in class and to write an essay which the professor asked: “who wrote this essay, this is the best essay”, and I raised my hand and he looked surprised. And it was a very small fleeting moment and it was maybe my fourth week in the US. But that’s when I realized that to be black is to have people make certain assumptions of you”.

She went on to make very interesting assertions about feminism, race, and identity.

I bring it back to my interaction with Carys and my personal experience. As a Nigerian in Nigeria, I never had to think of myself as Black, even in my relations with people of other races through work and my social life. My race never occurred to me. Even after coming to Dubai and hearing stories of black people not getting access to opportunities, being segregated in the dating pool and other things, I still brushed it off as a projection of people’s personal experiences on an entire race and acted like it didn’t exist and that heavily helped me in building bridges across races.

I remember the one time I went to the pub with a Swedish friend of mine at a bar in Dubai Marina and we ordered two beers. The Filipino waiter suddenly asked for our Emirates ID to start a tab for us. My friend asked why and he said it was a new policy, but my friend wasn’t having any of it. He believed it was because I (a black person) was with him and asked for the pub management. He only relaxed when the management assured him it was actually a new pub policy.

Being a Nigerian born in the late 80s and early 90s, I have had almost no direct interaction with racism apart from books, the movies, visiting slave trade sites and monuments. I have been happy to compete with people of other races at work and school. The ‘average Nigerian’ didn’t grow up with history and understands it even less because we do not have a great culture of passing down lessons. Caribbeans, Black Americans, and other Africans carry the black identity a lot more than most Nigerians. It takes a direct interaction with the west by living, going to school or working outside West Africa to really embrace it. The South Africans probably understand it a lot better because they were colonized longer and still face some of the raw pain that came with being black under apartheid South Africa

Hearing Chimamanda share her experience is probably the closest I have ever associated her with being an average Nigerian. You mean there was an actual time when she thought and breathed in the same air as the rest of us? Did she ever visit the slave trade sites before going to school in America? Did she ever read the books or watch the movies? Had she heard about Emmet Till?

Understanding racism in theory or by purposely educating yourself is totally different from experiencing it directly or through shared history and the reality is that a lot of Nigerians fall under the category of the average Nigerians. Like Chimamanda who realized she was black in America, I had to leave Nigeria and live in Dubai to realize what it truly means to be black.

Would knowing more about history have changed me growing up as a Nigerian? Would it have affected the superiority mentality that we have that pushes us to be the best at everything we do? I guess we might never know.

Rama: Let’s Talk About the Romance Renaissance in Fiction Writing

International Day of the Girl Child 2019: Hey Girl, Don’t Be Afraid to Dream!